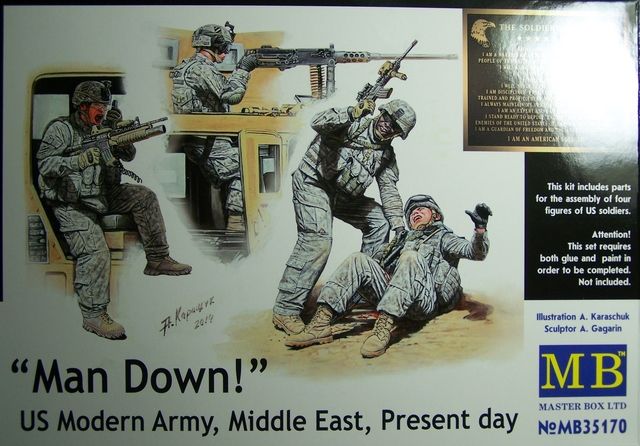 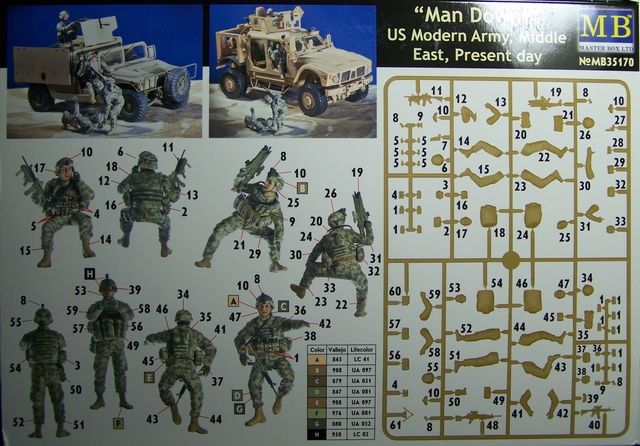 This is another modern set based on US Army forces in the Middle East, protecting and retrieving a wounded comrade.
The Kit: 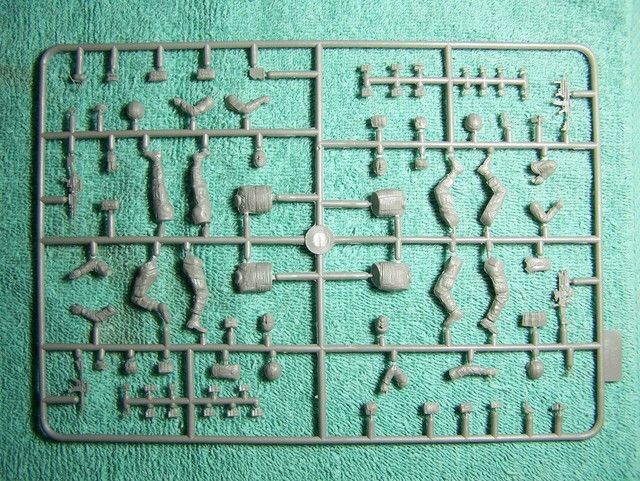 Contains 1 sprue with 85 pieces that have no flash.
This set gives you four (4) US Army soldiers. One is wounded and down on the ground, while another is trying to drag him to safety. The other two are vehicle based (Vehicle not included). One is hanging out of the door of the vehicle calling for assistance on the radio, while the other is manning the heavy weapons system on that vehicle. They show them on both the Up-Armored HUMMVE and the MRAP. All of them are loaded down with equipment to include: Camel Back hydration systems, Body armor, Holstered Pistols etc... Weapons provided for the figures include: MP7 with ACOG and Grenade Launcher, M-4 with EOTEC site, M-4 with Grenade Launcher and M-249 SAW with Aimpoint (variant) site and a Beretta M-9 Pistol. All the weapons (except the pistol) have some sort of telescopic/hydrographic sight system attached) please forgive me if I have the wrong one listed as there are so many new and similar systems being used today.
The weapons, uniforms and equipment look accurate.
Conclusion: Another outstanding Modern US Infantry set.
The uniforms and equipment are covered in numerous books, so information on these should not be too hard to find.
Overall this should build into an outstanding replica and is highly recommended for anyone who enjoys figures.  I would like to thank Alexander Surzhenko of Master Box Models for the review kit.

Simon,
I don't build a lot of modern stuff, but the guys in the set might make me change my mind.
The wounded guy and the guy pulling him out of the line of fire would make a great vignette all on their own.
Shawn

I'm very much moving over to modern stuff, so these modern US sets from MB are right up my street.
_________________
You don't get to look like this through clean living!
www.simonhammerton.co.uk

Simon,
Sounds good, I know that you will like all of the modern stuff they are putting out.
Did you see some of the older reviews that I did of some of their other modern stuff...
I think that have hit the nail on the head with their figures.
Shawn

I have seen the reviews Shawn, and I've bought most of the middle east sets based on your reviews.

Simon,
I will take the blame, but not the credit.
I've had little or no input (except maybe a name or two) of Master Box and their great kits.
The team at Master Box deserve all the credit and their sculptor too.
Sometimes I get to tweek the name or do some research and write their "write-up" to go with the directions.
Other than that I am but a mere humble helper to make sure modelers like us get the right information
to buy/build great kits. As you can see I do review a lot of their kits, but I also review other kits and stuff,
if it's sent to me or if I buy it and think others will enjoy it.
Shawn