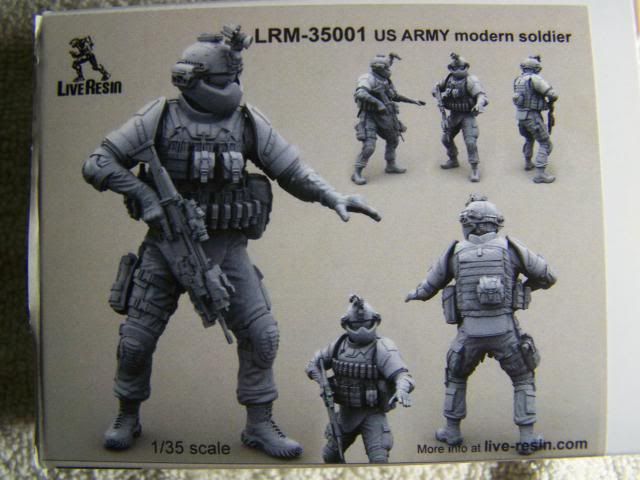 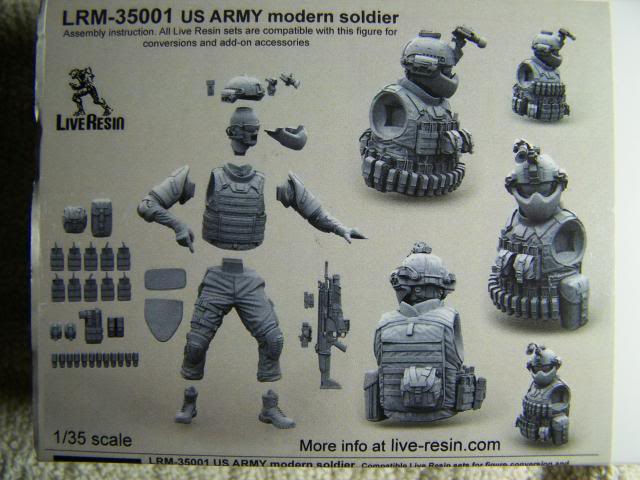 This kit gives you one full resin US Army Special Forces Operators with all the bells and whistles that he would have in a modern combat environment. This US Army Special Ops guy comes with tons of stuff in the way of, weapons extras and equipment.
The Kit: 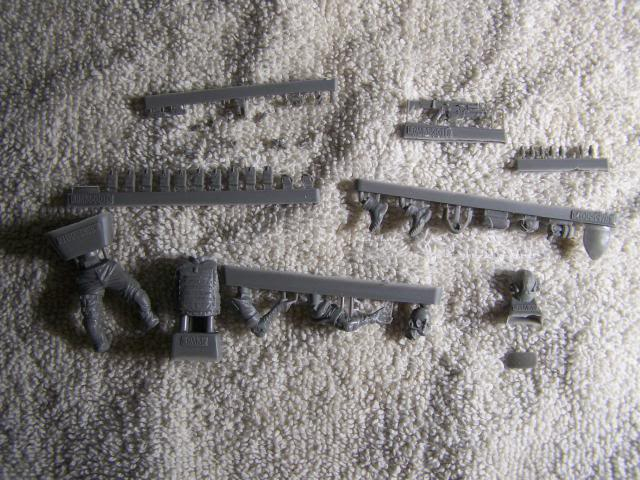 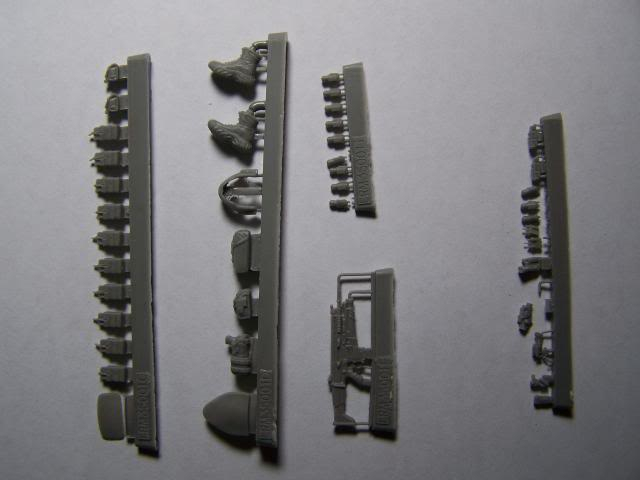 Contains 9 sprues with 48 pieces that have little or no flash.
This is the list of stuff that comes with the figure right off Live Resin’s web site: http://live-resin.com/figures/figures-135.html
LRM 35001 US ARMY modern soldier with covered ACH/MICH helmet with NVG PVS 14, MS2000 Strobe Beacon Infrared/ Visible Strobe Signal Light and MTEK Predator Face Armour, ESS Crossbow goggles, M9 pistol in Eagle Molle Universal Holster UH-92F-MS, USSOCOM SCAR weapon system FN SCAR-H / Mk.17 Std and CQC with mounted Mk 13 Enhanced Grenade Launcher Module(EGLM) with ELCAN SpecterDR 1-4x SU-230/PVS and FN Fire Control Unit (FCU), Massif flame-resistant Army combat shirt, Army Flame Resistant Pants IOTV Gen 2 body armor with Deltoid Auxiliary Protective shoulder pads and low back protector, Oakley Factory Pilot SI Assault Gloves, Oakley Sabot High Assault Boots., Military Surplus Tactical Knee & Elbow Pads, CONDOR MA24 7.62 NATO 308 MOLLE Rifle Magazine Pouches, Tactical Tailor MOLLE Medic CMT Pouch, Military Army Issue MOLLE canteen Pouch, 40 mm grenade 12rd bandolier/belt, Tactical Tailor Grenade Pouches.
If you are not familiar with these items a quick search on the internet will bring you up to speed.
Live Resin is making these figures and accessories with a 3-D printer and they are outstanding. They are also modular so you can mix and match the figures body parts and all of their equipment. What is really nice is they give you all the pieces separate so you can tailor make your figures. They also make a bunch of after-market weapons and accessories. The uniforms and equipment are spot on accurate.
Conclusion: Live Resin has made a great looking US Army modern Special Warfare Operator.
The weapons, uniforms and equipment are covered in numerous books, so information on these should not be too hard to find.
Overall this should build into an outstanding replica and is highly recommended for anyone who enjoys figures.  I won this in a raffle at a recent model contest. Some of the pieces were knocked off the sprue and or broken, but that is not a problem.