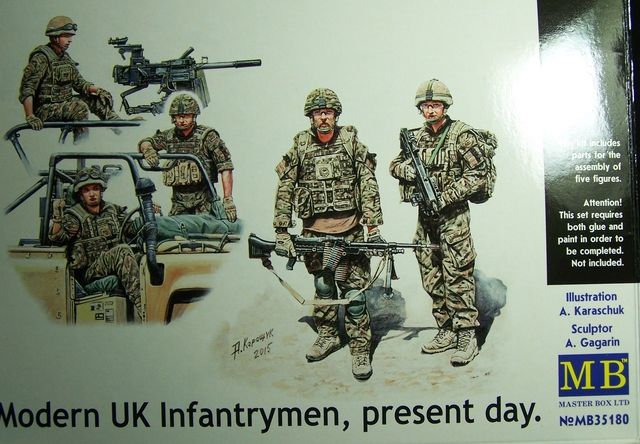 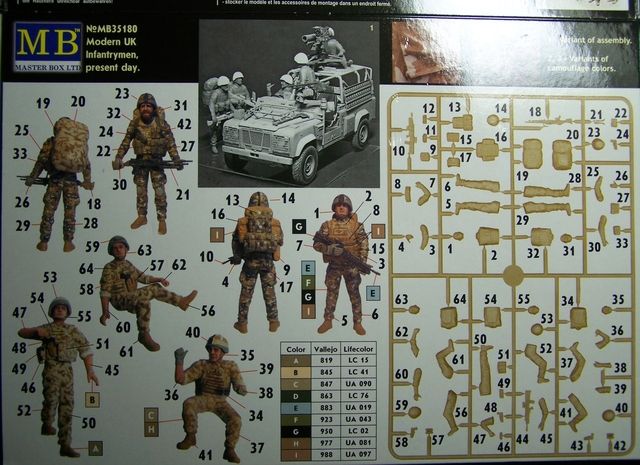 This is the first set of British modern Infantrymen based on UK Army forces present day.
The Kit: 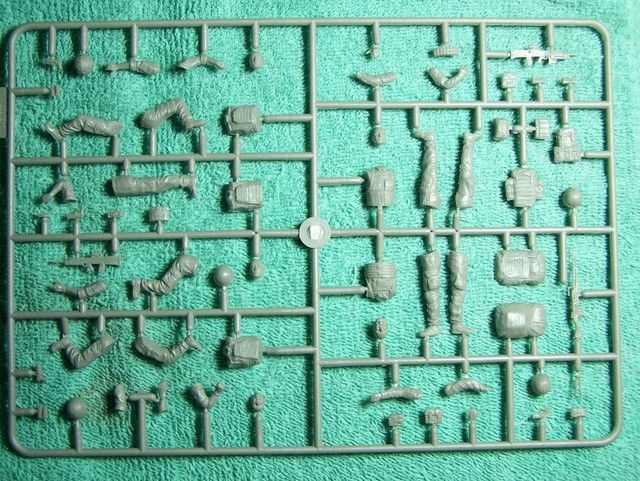 Contains 1 sprue with 64 pieces that have no flash.
It has five UK (British) Army soldiers 2 standing and 3 vehicle based (vehicle not included). One is the Heavy Weapons soldier carrying the L7A2 General Purpose Machine gun. The other standing soldier can have either the L85A2 standard issue assault rifle with SUSAT or ACOG scope or the L85A2 with SUSAT or ACOG scope and L123A1 underslung grenade launcher (both are provided in the set). Box art shows the other three figures fitting nicely into a modern version of the Military Land Rover. All five are in relaxed positions and have side arms in holsters, body armor and helmets with covers. The two standing members are in full kit.
The weapons, uniforms and equipment look accurate.
Conclusion: This is very sweet set of Modern British Soldiers that Master Box has come up with.
The uniforms and equipment are covered in numerous books, so information on these should not be too hard to find.
Overall this should build into an outstanding replica and is highly recommended for anyone who enjoys figures.  I would like to thank Alexander Surzhenko of Master Box Models for the review kit.

Can they be used with a Challenger 2 in Gulf War 2?

Simon,
I agree and they look well done and accurate too.
Almost looks like a two man recon team meeting with their pick up/extraction team.
With a couple of these sets and some modern British vehicles this would make an awesome diorama.
Shawn

Peter,
I don't see why not. They aren't tankers, but if you add some modern kit to the vehicle guys, you could have them sitting on the rear deck of a modern tank.
I think they would look great with anything Modern, You could even put one or both of the infantry/Spec war guys with some US Special forces guys (as we often worked with each other) and then the possibilities are endless.
Shawn

What I weabted to knoe was if these guys could be used as INFANTRY with a Challenger tank during Gulf Warr II. How about with a Challenger I during an earlier conflict? It's so hard to get either post Korean Conflict British or Canadian troops in styrene.

Swap the GPMG for a sniper's rifle and extraction scenario really works.
_________________
You don't get to look like this through clean living!
www.simonhammerton.co.uk

Thanks Simon,
Peter, Simon is right there with you... The two guys on the ground come with full kit and should be just fine.
The ones in the vehicles would have their stuff stowed on/in the vehicle or some of it at their base camp.
I'm sure you can find what you need in books, as to what they would have during which conflict.
They have their basic kit on them, it's the full pack and such that isn't on the guys in the vehicle.
There has got to be a decent Canadian/British modern weapons set out there? Right???
I know there is a bunch of after market weapons sets, but I'm not up on who is using what right now?
I remember that when I was still in the game, The British/Aussie SAS guys that I ran into had their
basic load out and since we all used NATO weapons/rounds we could provide them with the ammo that
we/they expended.
If their isn't a decent Modern British/Canadian weapons set out there. The Guest Book at Master Box Models
is the right place to tell Alexander about it. He reads all of them entries and usually responds to people if it's a
valid request. I think a modern set of weapons for that group would go nice with what they have in sets.
Maybe even get them to make an SAS group and really do it up right.
Thanks again Simon for helping out.
Shawn

Thanks all. Sounds like I can get a few figures out of this set to use either with my Challenger tanks or my Tamiya SAS Land Rover.

Thankfully Live Resin are now doing modern British weaponry. Accurate Armour have had some for many years, but IMHO the Live Resin is better.
_________________
You don't get to look like this through clean living!
www.simonhammerton.co.uk

Thanks Simon,
As always you are a wealth of great information.
Hope all is well with you on the other side of the pond?
Keep in touch.
Shawn

Ok. Arthritis pretty bad, but we have an excellent physiotherapy centre nearby with a hydrotherapy tank that I'm using regularly so getting handling it ok.
_________________
You don't get to look like this through clean living!
www.simonhammerton.co.uk

Best of luck with that Simon.
Make sure they don't throw vegetables in the water with you and turn the heat up. LOL

When you can cook lobsters in it I still find it a tad nippy.