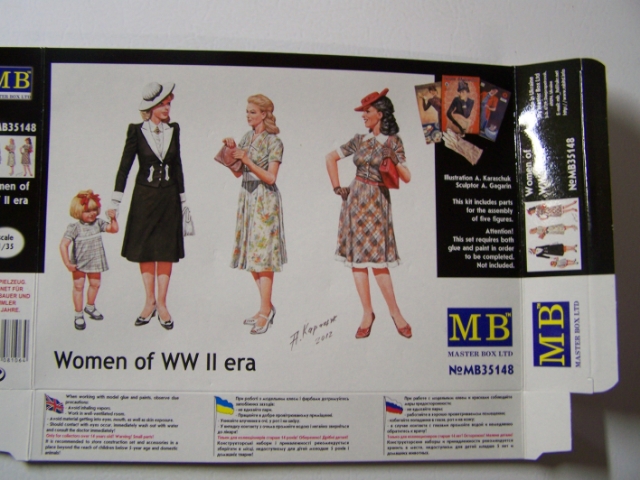 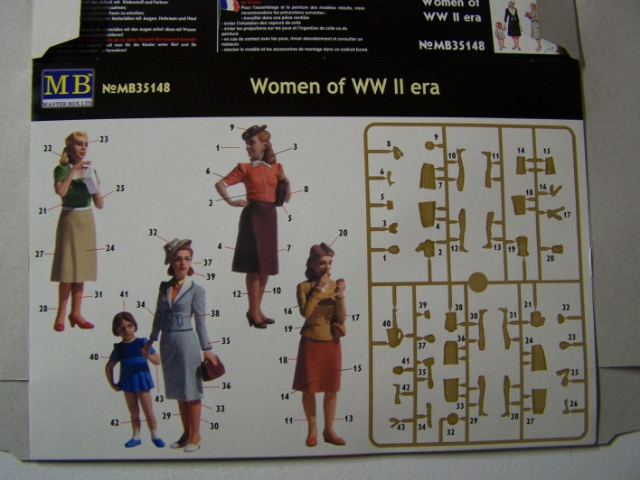 This is another really great set of civilians from the period of World War II. This set gives you 5 civilian figures of woman in period clothing that could pretty much represent the woman from any city in Europe, Australia or the US.
The Kit: 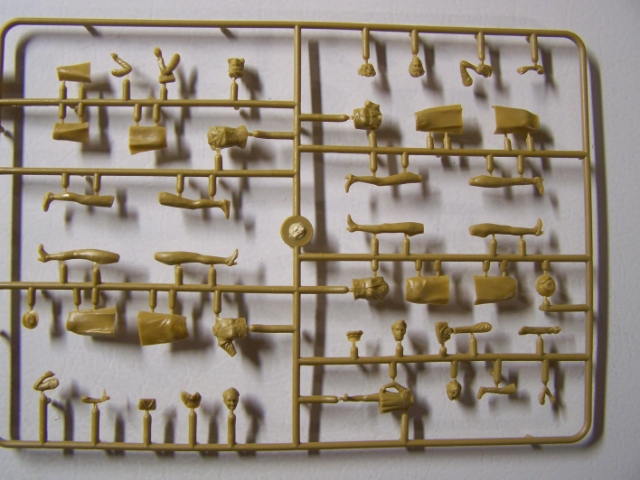 Contains 1 sprue with 43 pieces that have no flash.
It has five figures: one young girl and four woman (two in short sleeved blouses and two that are more dressed up with jacket type tops over blouses). Each woman has a hand bag or clutch all in relaxed poses. They can be built and displayed alone, in a group or in the company of any serviceman from any country. Three of the woman have hats, two of which do not have to be added, or they can be swapped out. (one of my kits hats was damaged in transit, but can be easily repaired). The box front shows three figures and the young girl and the box of the box shows all five figures.
Conclusion: Once again, Master Box has come out with a set not usually covered by most model companies. Many figure builders like non combat or relaxed poses and this one really brings it home to the homefront. These are some great looking civilians to fill the very large gap in this area of modeling. It also gives you the endless diorama idea's using woman.
I highly recommend both these kits for anyone who enjoys figures and wants to add civilians to their dioramas. I would like to thank Alexander Surzhenko of Master Box Models for the review kit.
The full pictures can be seen at my photo bucket account.
http://s573.beta.photobucket.com/user/shawngehling/library/Master%20Box%20Woman%20of%20WW-II

Thanks Shawn. A good review of a nice looking set of figures for those that want to do a diorama with something other than all combat oriented figures.

Can those heads be used without the hats? Ar they full heads or is the hair flattened where the hat goes? If the heads can be used sans hats then I'll try to get a set.

Gary,
Thanks... I think it is a great kit too.
Chris,
As the review says three of the woman have hats, and only one is molded on to the head. So you really get three woman that don't have hats attached to their heads. The possibilities are endless.
Shawn