This book is a beautiful big coloured book , featuring some amazing works by some very talented Spanish Modellers , other than Mig Jimenez the rest are not as immediately recognisable . This is part one of a two volume set , it is divided into sections which will link to the second volume with the other matching sections . 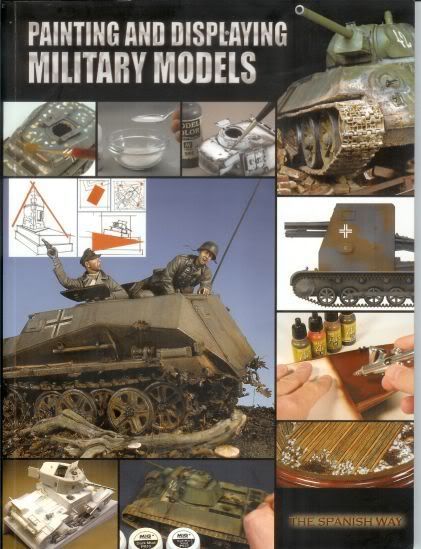 The first section is the Four elements , Earth , Water , Wind & Fire
of these Wind & Fire are covered in detail in Volume one

Wind is covered in an amazing diorama by Andres Bernal where a wildly careering Sd.Kfz 253 into a big pile of leaves , the leaves look like they defy gravity , as if they are floating . The effect really is amazing .

Fire is covered in a diorama of a burned out T-26 which has a brilliant step by step guide to how it was painted & the wide variety of mediums used to create the effects . There is some great theory of composition of dioramas here as well . This is done by Chema Cabrero .

The second section is the Four seasons , spring , summer , autumn & winter . The two seasons covered are spring & winter in volume 1

Spring deals with a model of a Sig 33 auf Pz I Ausf. B . A very well done model of the Alan kit with aftermarket & a very worn winter whitewash by Juan Luis Mercadal & some brilliant melted slushy snow .

Winter by Francisco J. Arevalo is a diorama called the Suburb & is set on the fringes of Kharkov 1942-43 with a Pz III , again this vehicle has a superbly weathered whitewash , a beautiful russian house corner & a great step by step of a product called signifer snow which creates an amazingly lifelike effect .

The third section is spaces , Streets , Facades , City & Factory . The spaces covered in volume one are city & Factory

The city model is a large 1/72 scale diorama called a streetcar named defeat by Javier Franco . It is a large diorama on two levels with two large buildings , a streetcar or Tram multiple buildings & a lower level with a railroad & a large retainer wall . All this comes together to make a highly detailed city section .

The Factory model is a beautiful diorama by Javier Redondo of a Russian T34 called Stalingrad' son . Beautifully complex ,detailed multi levelled diorama of a factory ruin . It appears larger than it is which I suspect has something to do with the T34 being on a dramatic angle , the vehicle is climbing a busted wall about to drop onto a lower levelwith two hopper cars . a very well thought out diorama !

The fourth section has a invited builder , none other than Mig Jimenez & also a full reference on the Sig 33 auf Pz I Ausf.B by Guillem Marti & beautiful colour profiles of the Sig by Claudio Fernandez

Mig as the guest builder takes us through the painting & weathering of his amazing Bronekater , all covered in beautiful photography with all his amazing weathering techniques .

The section on the Sig 33 has over 60 photographs of this distinct vehicle , along with a unit by unit history of them , they are remarkable photos , none of which I recall seing before with some super diorama ideas combine this with 8 sets of front & side colour plates showing a diversity of schemes , if you are getting the Dragon kit , this book is a must have book . Do not contemplate not getting it for it shows the sort of detail that is invaluable , the type of men , the uniforms & the terrain give all the diorama ideas you will need .

This book is published by Xtreme modelling , it shows in how professionally set out it is , I liken it to an ideal coffee table book on modelling such is the quality of the paper , photography & layout .

My sincere thanks go out to Jose Azorin , the editor of this amazing book , for the review copy . Thoroughly recommended .

Jenny-
I really didn't realize how in depth this book was until I read your review. It's now on my "Must buy" list along with the Squadron figure book you also reviewed.
Keep up the good work, Supreme Blondness

Excellent review Jenny. I'll definitely have to pick this one up!

(p.s. thanks for the link

I'm sure it will be an inspirational read

Jenny,
Thank you for a great reveiw..!

Until I saw your reveiw,I wrote this book off as a "cheap wanta be" but now,its been ordered.

Thanks and great job.

Hauptmann T
Be nice to me I am new

Guess I better start looking for this one then. I've got some roses to plant and could use the diorama help aid book. Thanks Jenny.