As I diorama builder and small web site owner I am always looking for the items that stand out and make a impact on my retina things that are not mass produced in plastic covered in flash and all come with the same accessories and extras no matter which kit you get. Items that can been seen in photos from the models period and produced painstakingly with pride and the willingness to get it right.

So following a link from a member on trackpads.co.uk I was amazed to find Helmuths Strongholds a small European company producing some great looking Arnham kits from operation market garden of world war 2.

Helmuths Strongholds started as a company in 2002 by Marco Beer , When I asked him "why take on the big boys with there mass produced wide ranges of kits "?

"We started because we thought (and still do so) that most manufacturers just want to make a lot of money and don’t care about historical / architectonic accurate facts. "
"You can buy a lot of buildings that can be easily placed in Russia or Europe and they called it Dutch or Berlin ruin. ""
" Also we have seen many kits that for sakes of fitting in a standard box are scaled down. " ( 3 floor high building with the total height of a large outhouse )

Which is a attitude I liked and a company ideology that would not make them billionaires, but would make them one of the best in the specialized model kit market at what they produce. With a growing range of kits that are taken from references in countries archives and blue prints of actual building / structures and in some cases only photos, the world is there oyster as long as the same pride ,time and effort is put into every kit they produce in the future as in there present rapidly growing range. which easily meets any modellers needs for a original and authentic looking Dutch backdrop or Atlantic Wall fortification. Diorama. 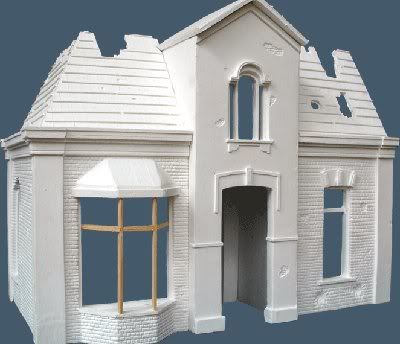 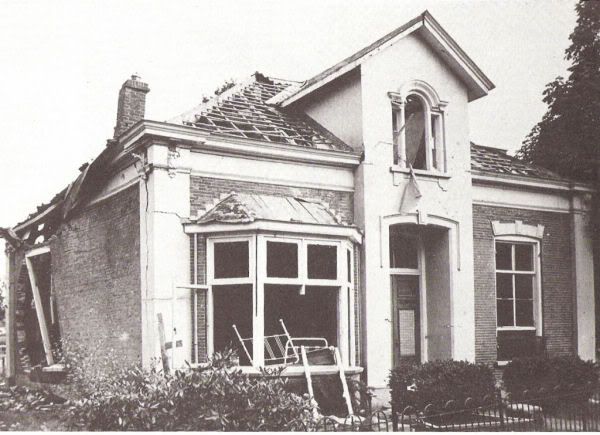 Marco court my eye with this photo which he put up on a modelling forum and got me thinking just how well made and close to it are there kits ?. Very few manufacturers back up a kit with a photo like this. Yes lots of fancy box art and drawings but a photo of a actual building not many take this route that I have seen, only the smaller companies have the honour and belief in there kits to do so, Hats of to Helmuths Strongholds.
Named Arnhem ruined house 2 it comes in 13 ceramic parts + 2 pieces of wood in a very sturdy nicely labelled box, Each part well wrapped in it’s own bubble wrap and filled out with packing chips to stop any movement in the box during transit. 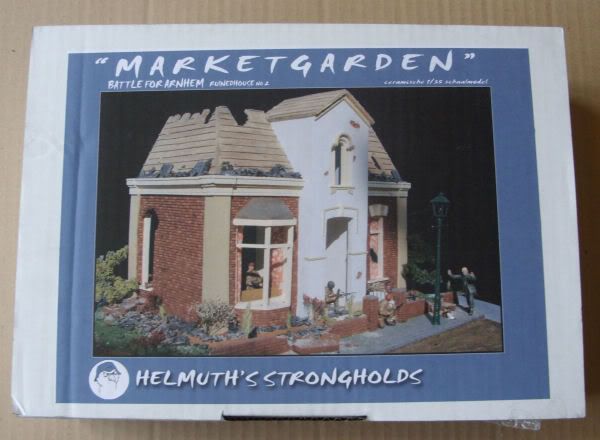 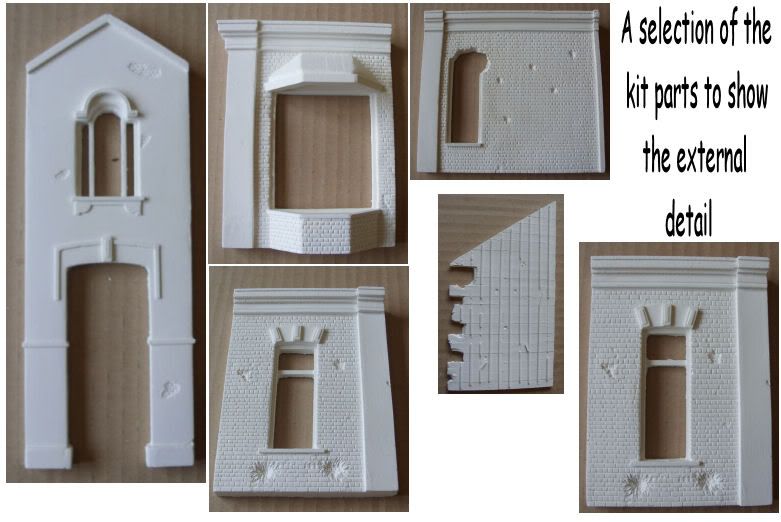 Further inspection of the kit showed the quality of the cast parts as extremely good. Details are sharp and without even the tiniest blemish on my sample I was very impressed at the boxes contents, Every part well produced and at what appeared to be scale thickness from the walls to the wooden roof slats.

The external walls of the kit are what can only be said as amazing each brick carved and detailed to the extreme, from the ground up the battle damage appears right for a conflict that was prity much just hand help weapons on the behalf of the British airborne forces, it is neither over the top or excessive with plenty of bullet holes and damaged stone work to give the eye plenty to see and study. Giving a great war torn look to a already highly detailed exterior. The wooden roof sections are a spot on showing wood grain planks and jousts perfectly. Once again giving the modeller the opportunity to practice his/her scratch with the addition of those all important roof tiles.

The Only let down for me personally was the inside which is left totally clean of any detail ,which is a great idea for those of us who love to add all the details them selves and make the build there own,
But I would have liked to have seen the addition of basic 4/5mm ridge marking were the floor should have sat and the internal roof would have been, Which would make adding the two so much easier, Using the central towers internal floor that comes with the kit the ceiling can be added quit easy though using that as a marker, With all things model wise the ridges were properly left off due to the way the kit is moulded during the casting process.

But with a nice clean detail free interior the kit can be easily detailed and added too, Giving a total four sided detailed view of a diorama that could be produced by the modeller. Giving him/her total control of any scratch building and content of the inside of the kit making it truly his/her own rendition of the above photo.

I was also very impressed with the well laid out and nicely produced instruction sheets ,which leaves the modeller with no dought as to how the kit goes together. Written in both Dutch and English with excellent reference pics it calmly walks you though putting it all together step by step. Even showing close up pics of the miner detail work need during construction to get the best out of the kit. 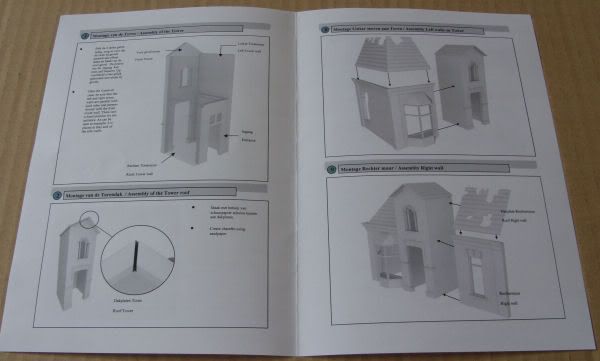 In all a fine highly detailed kit cast in plaster, it would make a great addition to any Dutch themed diorama and giving the modeller a chance to add his/her own touch to a already highly detailed kit making it there own.
With great research and a bit of thinking helmuths strongholds are filling a gap in the market with some amazing diorama kits and accessories that are well worth taking a look at if your planning any thing Dutch and like me love to scratch the interiors, I am truly looking forward to starting this kit as a build log on the site to bring a great kit to life.

With Marco working on items like the below list all due for release this and early next year helmuths stronghold will be going places and well worth keeping a eye on, with there present range growing fast and there commitment to historical / structural accuracy each kit depicting a period of time from history and not pulled out of the air by a designer can only be seen as a blast of fresh air to the market.

trackpad
Be nice to me I am new

That is a great review Andy

. I can say that I have also got some of their buildings and I totally endorse every word you have said .

Helmuth's Strongholds , a small but quality range , I support these craftsmen totally .

Andy,
The kit is amazing looking.

I have one question for you though?

If you plan to model that particular building (looking at the picture both the
windows are incorrect). Looking at it, the left (middle window is actually two
windows) or four if you count the whole window. and the one on the right should be
two windows vice one.
Other than that. It looks just like the real deal.
Can't wait to see what you have in store for us for an interior.
I followed the link and WOW is all I have to say. Looks like they have some really
cool stuff there.
Keep us posted
Shawn

Hi Shawn glad you found the reveiw usefull,i have made a start on the kit as its going on a Arnhem dio i am working on you.

This is the out side all dry fitted with a little bit more to do.

The floors inside dry fitted.

Right hand side roof halfway there

starting to sort the inner walls out a bit.

A full buils log of the kit is HERE if your interested in seeing what i added ect shawn,

trackpad
Be nice to me I am new

Sweet...
I looked at your build log and it looks great.
Like I said, the only thing that I would do (if you want it to look like the picture)
is to add another window frame in the middle window on the left and split the one
on the right.
Wow, all that detail you have added is amazing.
Shawn