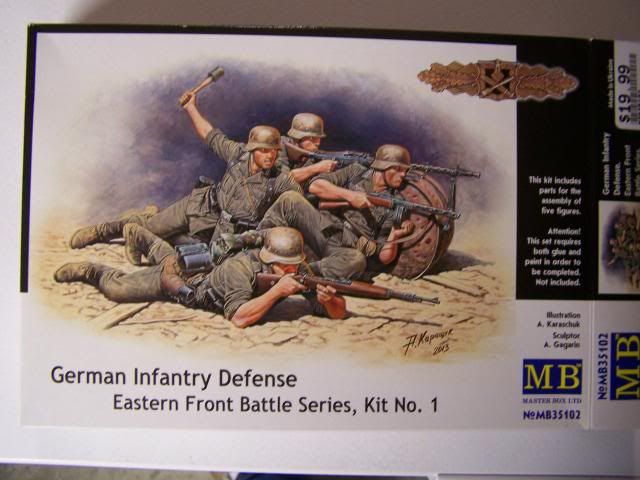 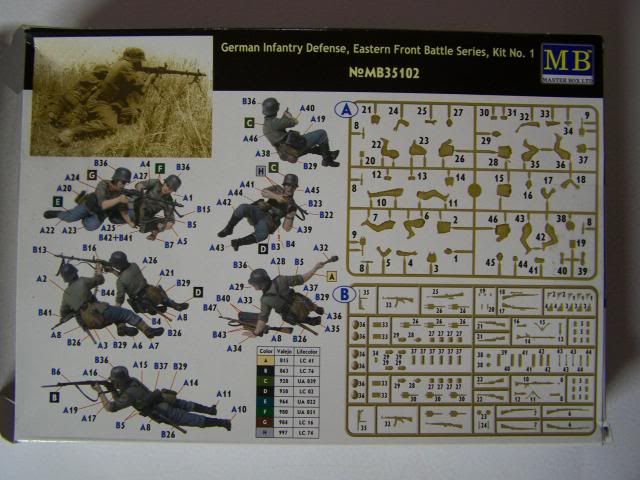 " />
This is an excellent kit based on German Infantry soldiers fighting from a defensive position or in retreat from the Eastern Front in Russia. The uniforms appear to be from the Spring or Summer.
The Kit:
Contains 2 sprues with 162 pieces that have no flash.
The first sprue is the figures and contains 50 pieces and is in dark grey plastic 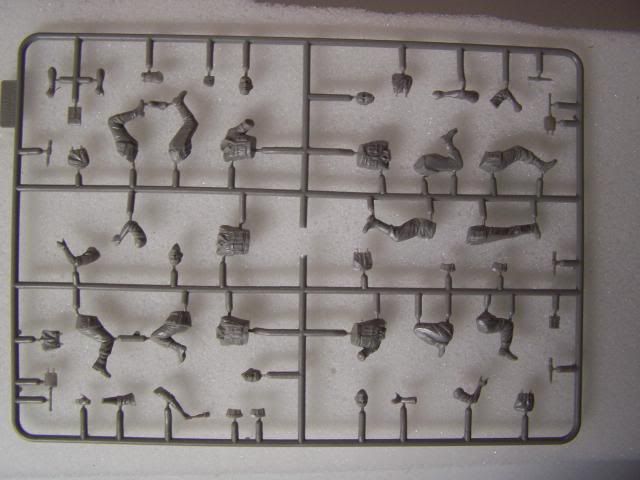 " />
The second sprue is Master Box’s German Infantry Weapons set (MB35115) and is also sold separately and contains 112 pieces (weapons and equipment).
This kit contains five German Infantry figures all are prone or laying down, one is shooting a KAR 98 Rifle, one has a rifle and is throwing a grenade (attached to his hand), one is at the ready with a captured Soviet machine-pistol and two are manning an MG-34 or 42 (one being the gunner and one the assistant gunner). Each comes with some basic equipment like bread bags, ammo pouches for the weapon they are carrying), MG tool kit, map case and knives, two have entrenching tools.
The weapons set will provide you with everything a German Infantryman would need and comes with tons of weapons and equipment to include: 6 helmets, 6 gas mask canisters, 8 water bottles (two without the canteen cups attached), 10 entrenching tools (5 early and 5 late war issue), 8 Mess Tins (2 without covers), 1 pair of binoculars and ammo pouches, drums, magazines or boxes for all of the weapons provided (2 of the MG ammo boxes are open and come with belted ammo).
Weapons include: 2 P38 Pistols (with holsters), 3 Lugar pistols (with holsters), 2 Gewehr 43/Karabiner 43 rifles (one with a scope), 6 KAR 98 Rifles, (2 have bayonets attached and 2 have different type scopes), 2 STG 44 assault rifles, 2 MP-40 Machine Pistols and 2 Bergman Machine Pistol 35’s, 1 MG 34 machinegun with two different bipods (open and closed), 1 MG 42 machinegun with two different bipods (open and closed) both have the ammo feed area molded separately, 2 Soviet PPSh-41 sub machine guns and various magazines for the weapons that take them. There are 3 model 43 stick grenades and 3 model 39 (egg shaped) grenades.
All in all this is a great kit all by itself. 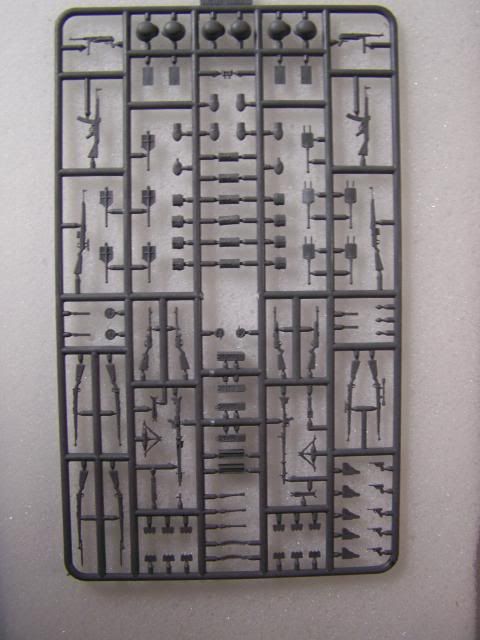 " />
Conclusion: Once again Master Box has released another set of figures that are a “diorama in a box” and can be displayed alone, or you can put them in a diorama with vehicles or building, again the possibilities are endless.
The uniforms and equipment are covered in numerous books, so information on these should not be too hard to find.
Overall this should build into an outstanding replica and is highly recommended for anyone who enjoys figures.  I purchased this kit at the Hobby Town USA in Everett Washington for $19.99 and think it is well worth the money.

Another fine looking group of figures by MB. Excellent detailing.

Chris,
They are... I really enjoyed building this set too.
Shawn