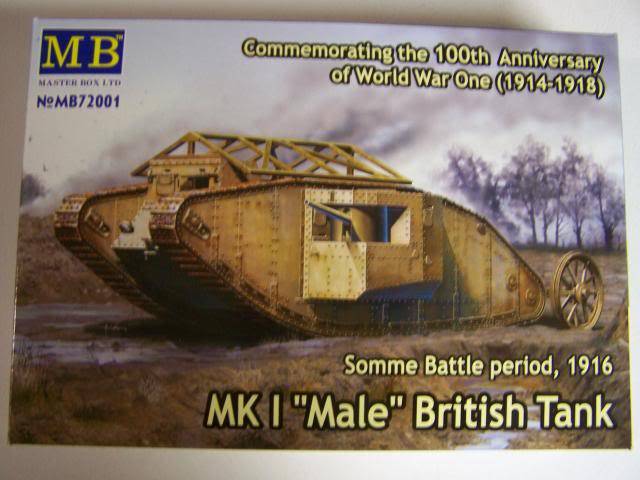 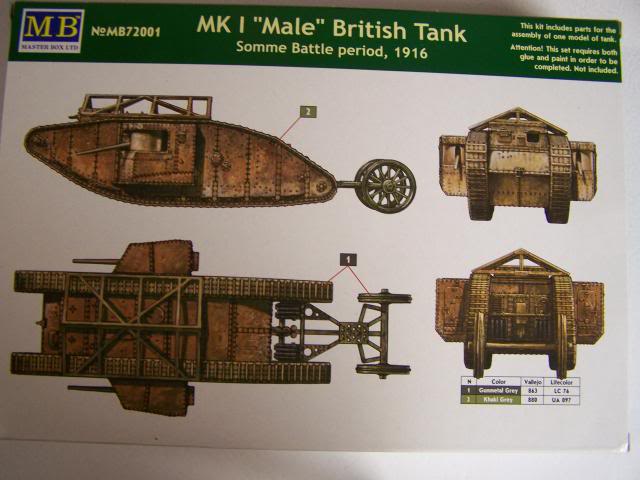 This is another excellent kit of a British MK 1 “Male” tank which first saw action in the Battle of the Somme (France) 1916.
The Kit:


Contains 2 plastic sprues with 47 pieces that have no flash. 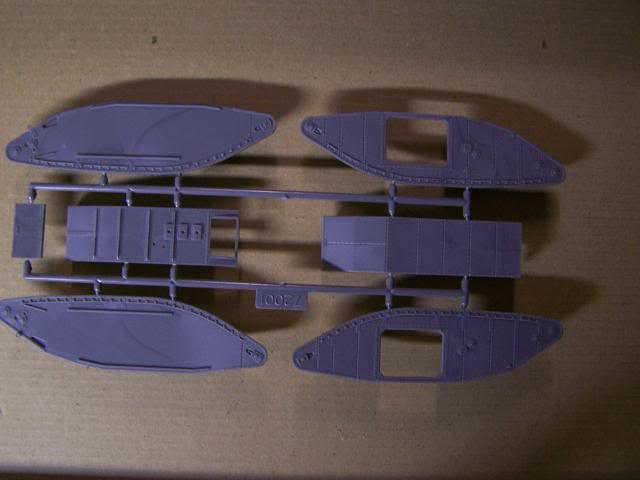 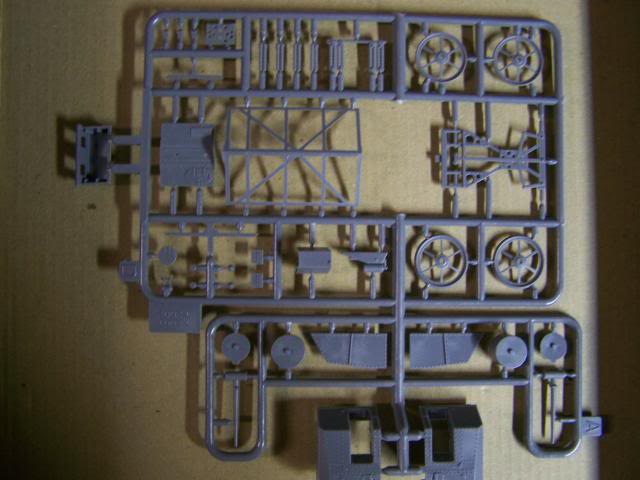 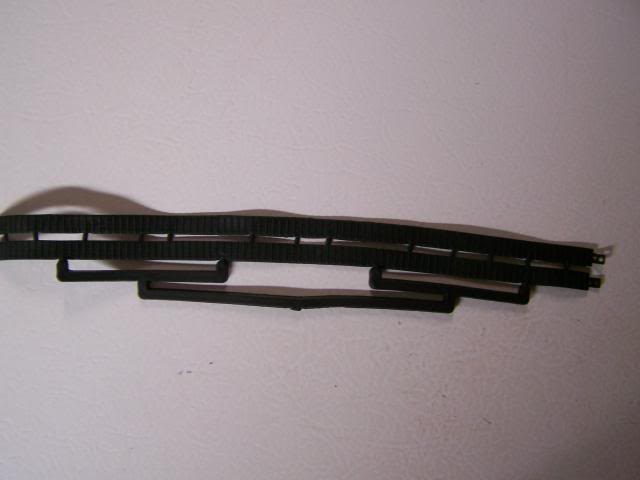 1 fret of brass with 5 pieces 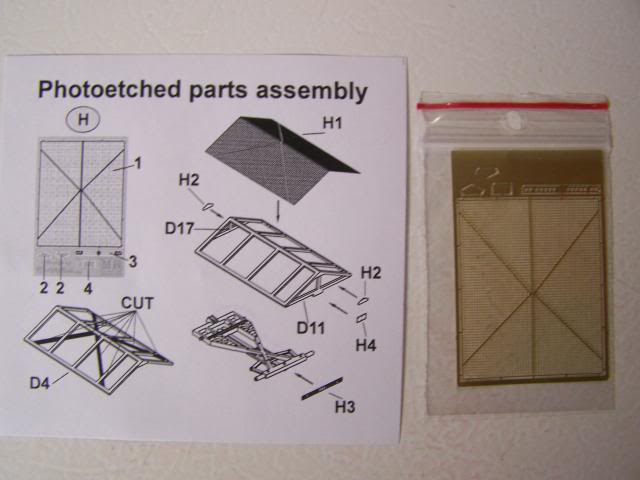 This set contains pieces to build one (1) MK 1 “Male”
Conclusion: This is the first Master Box kit in 1/72nd scale and looks great.
The MK 1 British tank has been covered in numerous books, so information on these should not be too hard to find.
Overall this should build into an outstanding replica and is highly recommended for anyone who enjoys figures.  I would like to thank Alexander Surzhenko of Master Box Models for the review kit.

The first tank to enter combat was the British Mark-I (MK I) tank. Many countries were trying to develop something to break the stalemate of trench warfare, but the British were the first to field one in combat.
A British army officer, Colonel Ernest Swinson, and the Secretary of the Committee for Imperial Defence, Maurice Hankey remained enthusiastic about what they believed to be the enormous potential of the tank, not least in breaking through enemy trench defences.
In attendance at the demonstration of the Killen-Strait tractor were two future British Prime Ministers: David Lloyd George, and the current First Lord of the Admiralty, Winston Churchill.
During the demonstration the tractor successfully demonstrated its ability to cut through a barbed wire entanglement. Both Churchill and Lloyd George came away impressed by its potential.
It was Churchill who, on Colonel Swinton's urging (and backed by Hankey), sponsored the establishment of the Landships Committee to investigate the potential of constructing what amounted to a new military weapon. The name of the committee was derived from the fact that, at least initially, the tank was seen as an extension of sea-going warships - hence, a landship.
By December 1914 the maneuverable period of the Great War ended. The battlefields became covered by the continuous lines of entrenchments, wire entanglements and powerful field works. The killing fields of fire produced by machine guns nullified any infantry attacks. To break through such defensive lines, they required days-long artillery preparation turning the vicinity of the attack into “a lunar landscape” and quagmire of mud. When the infantry did “go over the top” This would result in huge losses to the Infantry and no measurable gains.
At first the Supply Ministry refused to approve the production of the tanks and the Head of the Armament Department refused to deliver artillery pieces. The Navy took things into their own hands. The Admiralty allocated Hotchkiss 57-mm pieces for the armament of the tanks, and the first crews were Navy personnel.
In April 1916 Swinton (a man ahead of his time), suggested that some of the tanks should be armed only with machine guns in order to speed up the production and to protect the other tanks from Infantry attacks. There were two types of MK I tanks produced. “Males” (armed with guns and machine guns) and “Females” (armed only with machine guns).
The first tanks were far from perfect. The cross-country ability of these vehicles were extremely slow, transmission breakdowns were frequent and the atmosphere inside the tank was horrendous. Strong jolting, high temperatures, gasses from the engine being located inside the vehicle also resulted in crew members having Carbon Dioxide poisoning, heat stroke and fainting spells. Frequent breakdowns disabled the tanks at the most inappropriate times. Nevertheless, the MK I was a very powerful weapon and its appearance on the battlefield led to the changes in tactics and the way war was, is and will be conducted in the future.
The first use of tanks on the battle field happened on September 15, 1916 to the north of the Somme River. This attack was to be the last attempt of the British to achieve success in the large operation that began on July, 1. After one and a half month of bloody and persistent combat on the front 70 km wide, the British managed to move a mere 2 km forward, in some areas as much as 8 km ahead. Thirty two MK I tanks took part in the attack, five tanks had engine failure and nine tanks got stuck. Nevertheless, the success of the attack was outstanding, in five hours the British moved 5 km ahead into the German defenses on a front 5 km wide. In the course of this action ten tanks were disabled for various reasons and seven tanks received minor damage, but one thing became clear. The tank was a new force on the battlefield.
Mark I Tank
• Crew: 8
• Combat Weight
• Male: 28 tons (28.4 tonne)
• Female: 27 tons (27.4 tonne)
• Armour: .23–.47 in (6–12mm)
• Armament
• Male: two Hotchkiss 57mm (6 pounder) guns and three 8mm Hotchkiss machine guns
• Female: four .303 Vickers Machine Guns, one 8mm Hotchkiss Machine Gun
To aid steering, a pair of large wheels were added behind the tank. These were not as effective as hoped and were subsequently dropped.

Here are pictures of the completed kit.
It went together with little of no problems.
Not being a fan of Photo Etched parts, I left the whole upper bird house and screen off.
I also left off the lights (damaged during combat) and had to replace the tow parts on the front as the carpet monster stole it.
(during the build I found a few things to look out for).
1. Step 3 (part D-15 is not labeled on the instructions) but it's pretty much a no brainer as to which part it is. (this is also the same on the Female kit).
2. They give you part D-6 in both kits and neither shows you were it goes? (I will have to check with Alex and see if this part
is for a future kit)?
3. There are no instructions for the photo etched parts, but they are pretty much what they are and should not be a problem. 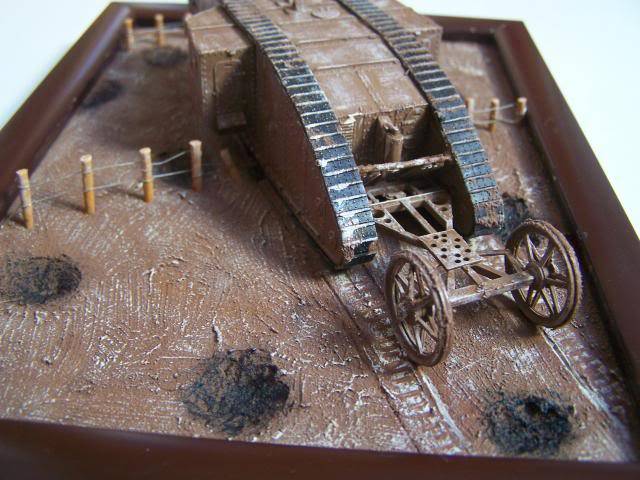 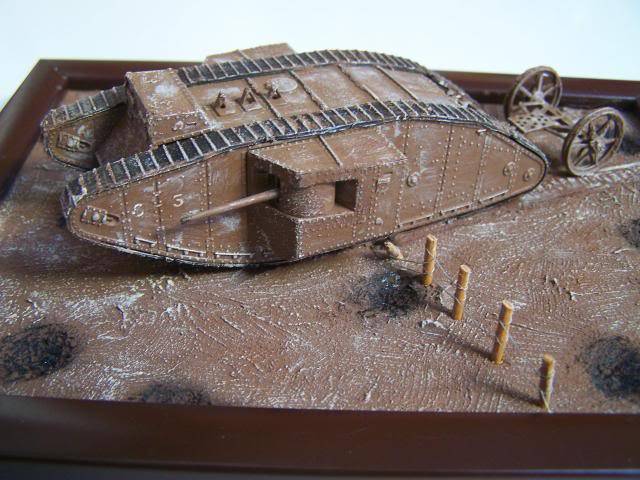 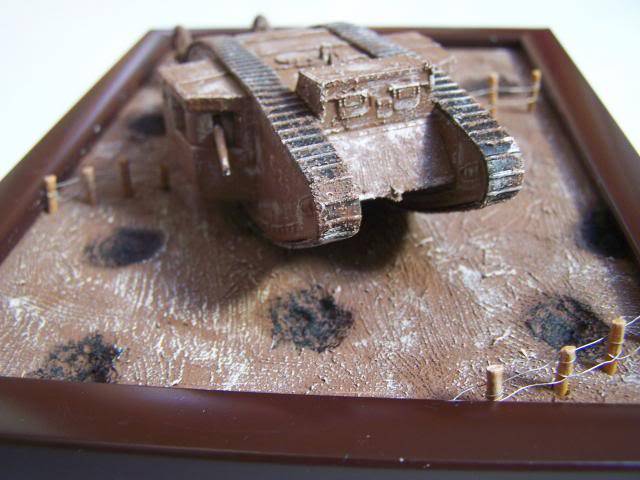 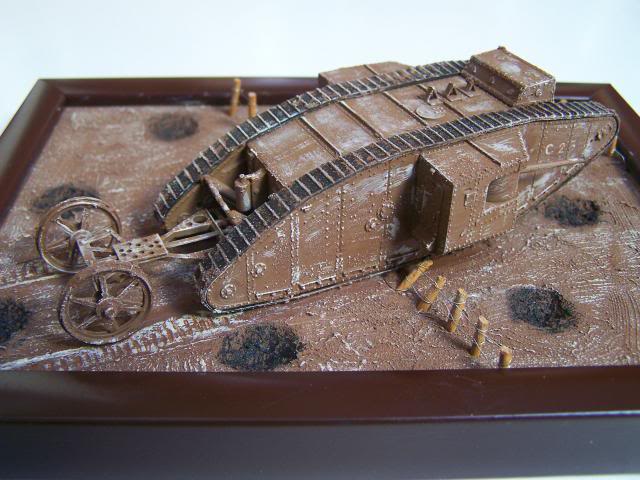 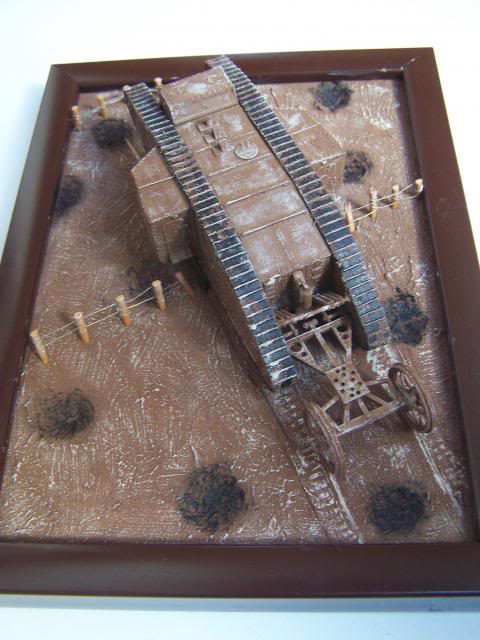 I scratch built a small base and added rows of barbed wire (which it easily just ran over).
Overall it's a great little kit and I had a lot of fun building it. I have some British Infantry for the Female tank, so that should come soon.

That's pretty neat looking. Thanks for the great review on that little beauty.

Thanks Chris,
I'm almost done with the Female version too...
I've modified it so it won't be from the Somme.

Toss some photos of that one on here when you get a chance. I'd like to see those too.

Chris,
Will do, but I'll put in in the review of the Female tank.

Cool, I'll be looking for it then. Thanks bubba.

Glad you liked them both.
Keep in touch Chris.
Shawn