Somehow I missed out on this, impressive work Jenny. Very fine detialing you are doing, I specially like all the bolts you added on the inside of the hull. Looking forward to see more.

holmerz
Be nice to me I am new

This just gets prettier and prettier every day. I see this and wonder how much time it takes you to do this. I imagine something like that Indian Goddess Vishnu with about ten arms or so going like crazy on the photo etch.

One thing to warn you about is the kits gun travel lock. When I built this kit I put the travel lock where they show it, and then the large ammo bin door can not open as the travel lock is in the way

. Maybe I just did something wrong, but with all the work you did on the ammo bin make sure the travel lock gives you enough clearance to open the door. What I have seen is that the kit piece is to far back. It should be as far forward as possible for the bin door to open.

Okay Gary , thanks for the tip , I will make sure I test fit it all before assembly .

The ammo would not fit in the original parts , apparently Cyber hobby did PE inserts & the ammo still would not fit in, this is because the thickness of the side pieces in Plastic & that scale holes would not fit but with the whole bin in PE this will be betterer , now because of this they still tried to make the length right & apparently since the doors are not scale thickness , this may mean the plastic part was not scale length , hence the fit issue .

The book has 1/35th scale drawings that were done prior to the release of the Dragon kit so hopefully they are not "compromised" by the kit ! So I will check against it too .

Thanks for the heads up .

You're amazing young lady. Every update showcases amazing workmanship and always the attention to details. And another year older, means another year more modeling 'wiser'. Keep up the terrific work.

Well last night all I got done pretty much was assembling 12 tool clamps , I do not like the Voyager ones very much at all so I replaced them all with Aber ones . 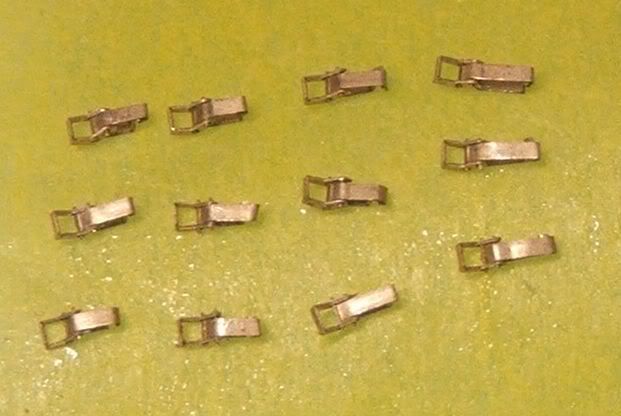 Three big ones & Nine little ones , this is the most tedious job done so tonight I will fit all the tools in the clamps .

the more i have to admire your work jenny! Bravo Zulu!

Wow, Jenny, you are moving with Lightspeed it seems

.
Great work with the PE!

Nice work with these PE. Guess you have very small fingers.

All these thingies in one evening. Hard work!

Thank you everyone for the lovely comments , well Johnny I have small fingers but I am only tiny anyway !

Well I have been doing work everywhere on the Marder but I wanted to show an update on the front top section of the Marder . 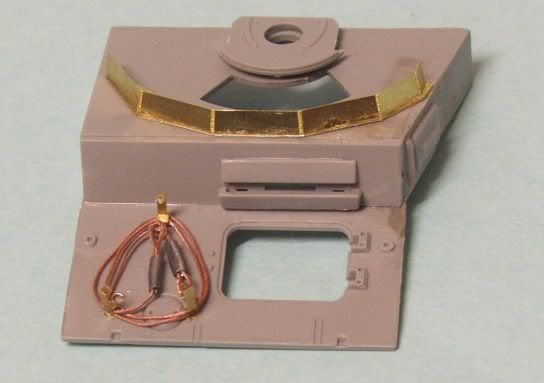 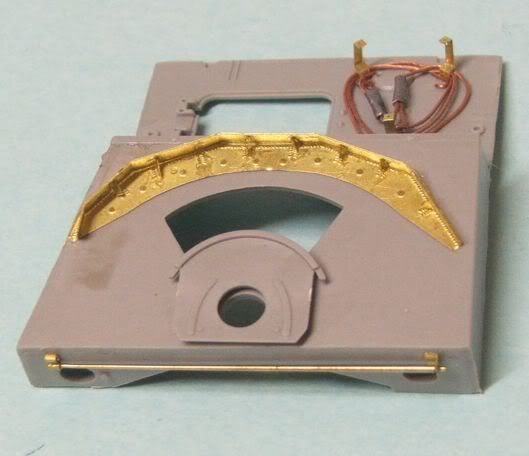 The Voyager PE set has a new armour plate that protects the gun mount , beautifully etched weld seams & fine wall thickness , throw Dragons plastic one piece in the bin thank you very much , a bit fiddly getting the supports lined up but well worth the effort .

The other main item I have added is the PE bracket that holds both the tow cable & the spare roadwheel . I used Karaoke cable & some lead foil for the cable crimps . Most of this detail will be lost anyway when I add the spare wheel . 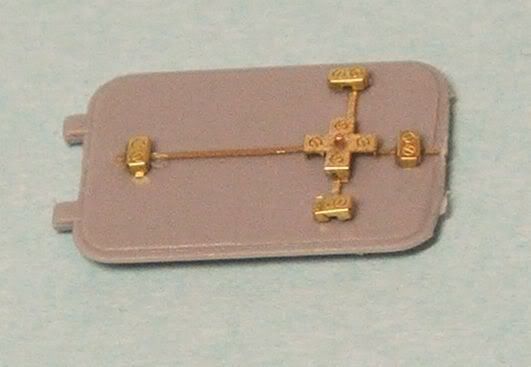 oops , looks like I have to adjust the far lock guide plate

what a wonderful work jenny! so utmost brilliant! i love the hatches and that armor plate looks just awesome!

Hi Noel ,
Well I checked , they are the correct width & shape , but if you look at the Tamiya Wespe it has dot pattern anti slip where the set I have has cross pattern anti slip pattern , so you will have to check reference pictures to see if they used this pattern on them , you can only use about half the pattern as the second half is without tread pattern at all .

Thanks for your time to give me info on the fenders. I don't wish to buy them and use half of them.... so I decided to keep the plastic ones on!

The drivers / transmission access hatch is simply beautiful. Pity to hide this.... are you going to leave it in open mode?

Keep up the good work!

Jenny-
Great work so far, it looks very clean for all the p.e. you're adding. This is gonna be a beauty!

Well Noel the Driver/Transmission hatch will be open . 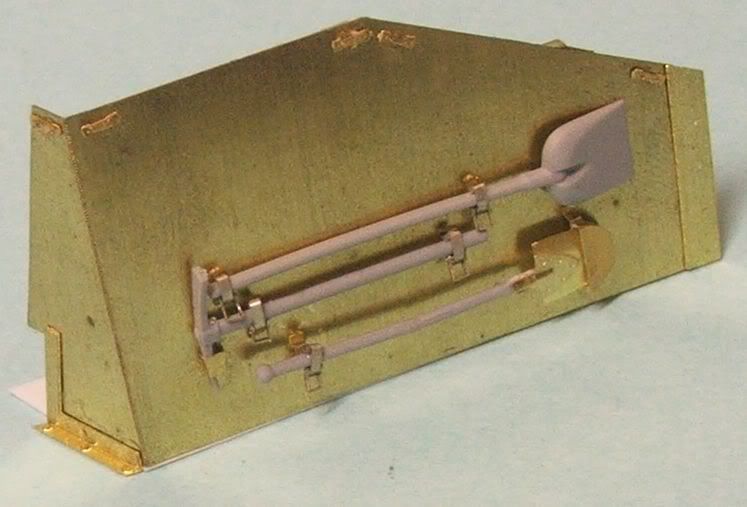 I have finished detailing the exterior of the left hand sponson two shovels & a pick plus fittings , note the tarpaulin tie downs along the upper edge . 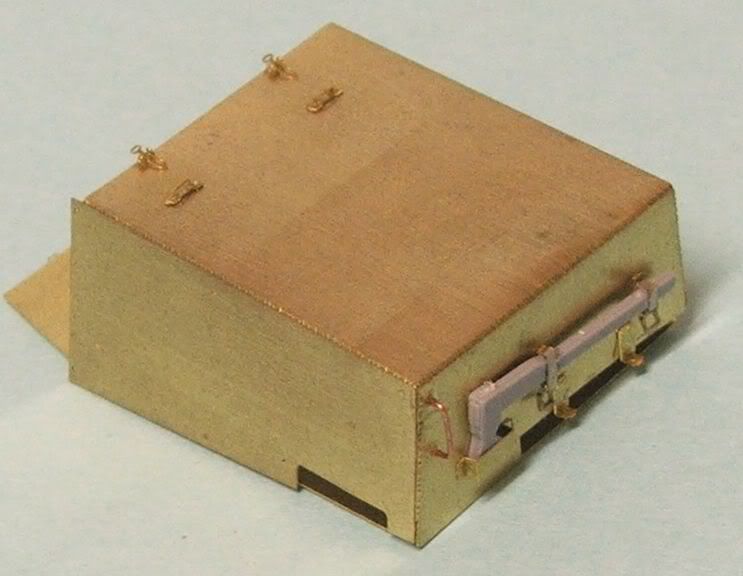 The left hand ammunition box , an axe is stowed outside of the vehicle , two small braces under the axe secure the ammunition box to the rim around the edge of the engine deck . 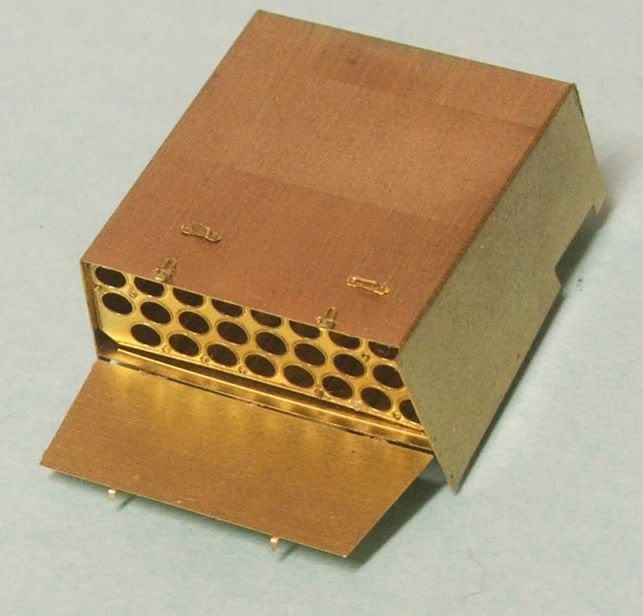 The tie downs continue in a row across the three ammunition boxes from one side to the other , note the tiny catches for the bins . The bottom of the stowage bin is not attached as yet so I can paint the inside of it so that is why there is a gap in the photos , the door is attached to the bottom & the hinges work . 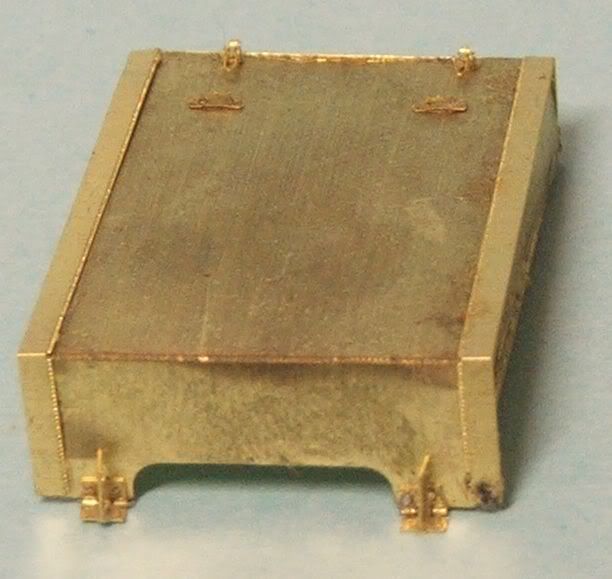 The central ammo bin is hinged at the back & folds outward so the crew can access the engine bay doors for engine maintenance . Note the bumper stops which prohibit the ammo bin from folding past the vertical 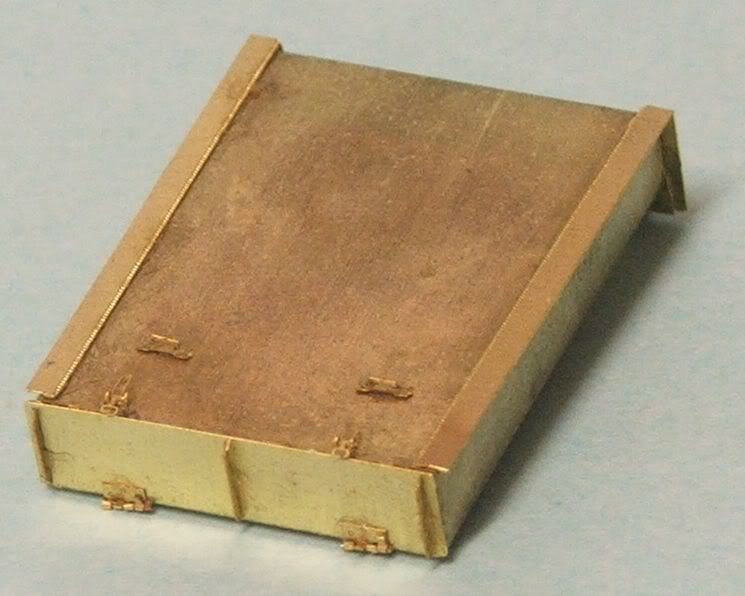 The interior of the same middle ammo bin , note the reinforcements on the door , hinges , those tiny clamps again & the tie downs .

what a significant update jenny! very clean work! you are a real master!

i know what i will do with my sturer emil pe ... i send it to you to assemble it and you send it back to me when you are done!

i know what i will do with my sturer emil pe ... i send it to you to assemble it and you send it back to me when you are done!

Oh Laura , there is nothing hard to doing PE work

, You just need a big heap of patience & imagine how cool it will look when finished

! With lots of encouragement from your friends you can do anything !

I really admire your work!!!! I still can not belive what I have been looking at!!!

...it´s a high difficult degree job...and you are doing a great work on this!...my congratulations...I´m following with a big interest...btw,did you already choice the painting scheme?

Your PE work is always very neat. Do you use 'etchmate' to fold the PE?

Thanks Noel , thanks Luiz , thanks Jose

Noel , yes I have an etch mate , I am thinking of getting the newer one now . I love it , money well spent , it really is great for larger etch bits too like fenders , does them in no time

. I have all different pliers & tweezers too , a grab handler & the two Mission Model Multi tools (they are Richies but I "borrow" them) .

Well Luiz I have a scheme in mind , it is a DAK vehicle .

New update, new details to drool over, and more masterful work to admire. Older age means eyes going bad, less steady hands, and muscle cramps when dealing with PE. I can get much of the pieces done, but forget where I put them...lol. Just jealous really. Terrific work and it just gets better every time you post. Are you sure Richie knows you "borrowed" his tools?

Hey Mike , as long as you do not tell him we are right , he never reads my posts

Well thanks to Gary , he alerted me of a problem with the Dragon kit , being with the rear gun travel lock installed as per the Dragon instructions , there is no way the left ammo box door will open & close properly .

I was unaware there was an issue with this part of the kit , so Thanks Gary !!!! 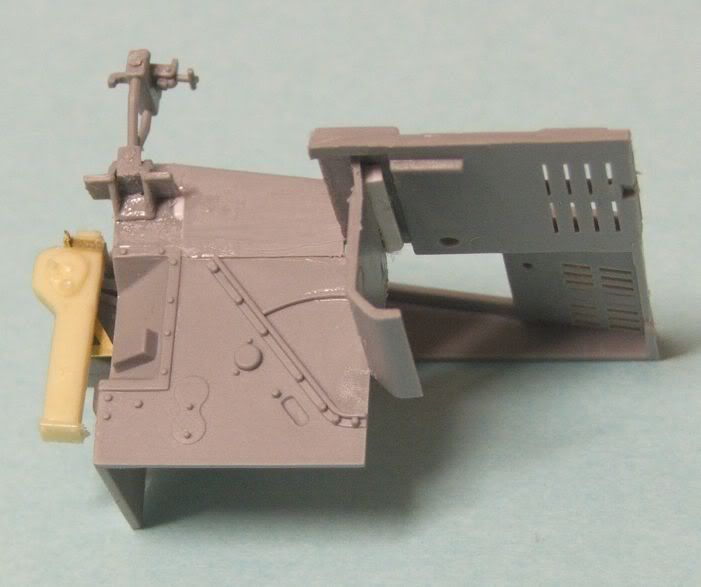 Here you can see the white area where the slot where the part was meant to go was filled . The slot registers with a part on the forwardmost part of the travel lock . This is a good 7mm back from where the part should mount . 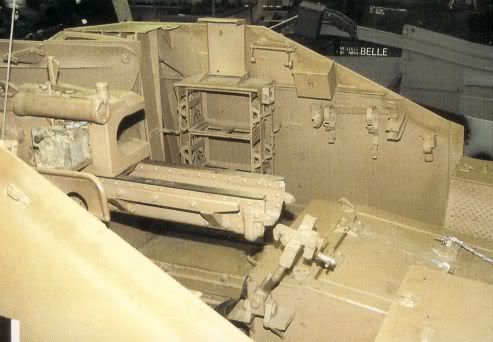 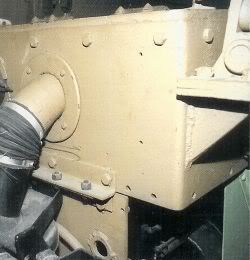 After Garys warning I checked the positioning of the real gunlock , the front lines up pretty much with the front edge of the engine bulkhead . 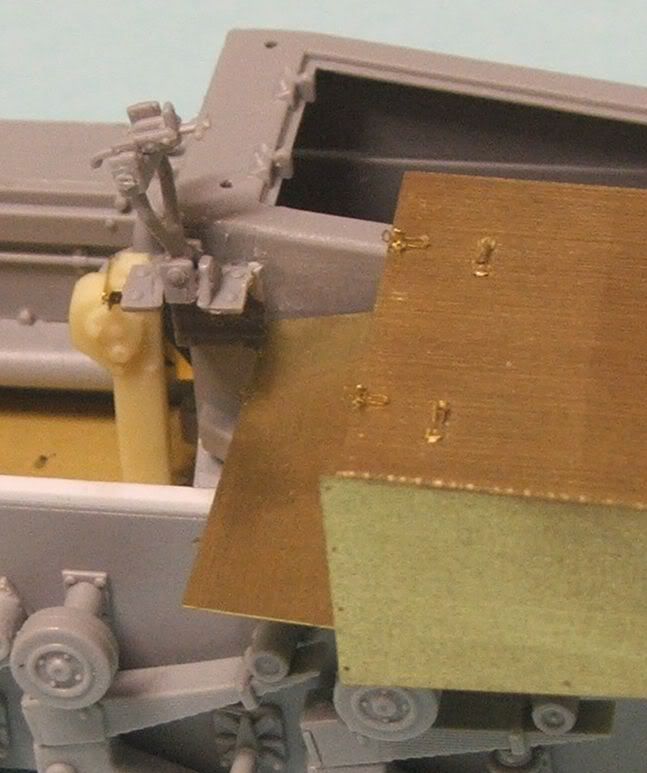 Of course it is a good idea to check the fit with the made up ammo box , just to be sure

. You may also notice the jack which is a standard Pz II jack which strangely was stowed inside the vehicle right next to the air filter . The Jack is from a company called M4 Models (there is not one provided with the kit ) & my friend Abilio got it for me 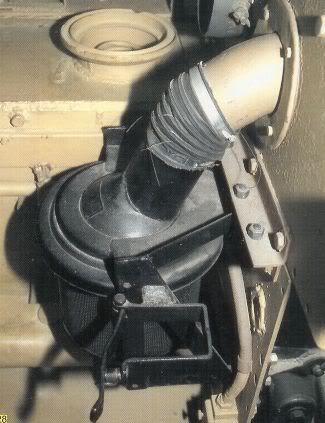 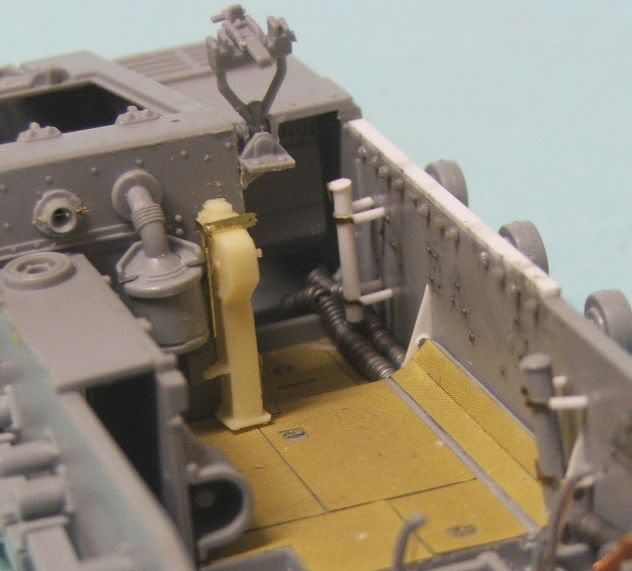 In this picture besides the jack are two wiring looms that run from the drivers section , underfloor to the engine compartment & also two gas mask tube holders (so the crew can use the filter without having to have it encumber them while operating the vehicle) , mounted on the left hand hull side of the vehicle . There is one provided in the kit but the kit has it mounted to the floor , since the voyager etch for the floor has a cut out for it I mounted it here but still made the mounts so it sits proud of the wall , I also made the other from scratch . Some strengtheners were added as well , just like on the real deal ! 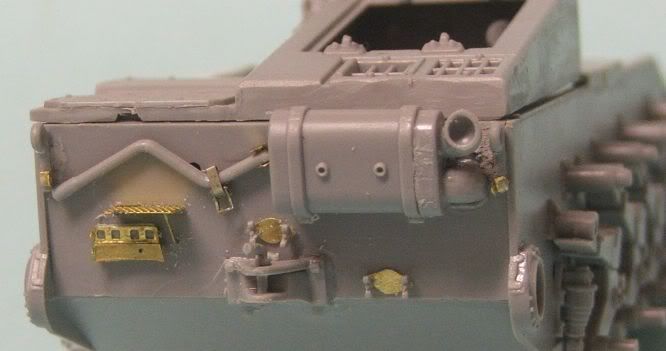 Here is the detailed rear plate of the Marder , whoops looks like I need to fill the hole behind the starter crank !

I added WWII Production wingnuts instead of the brass two dimentional items to the starter access ports , the teeny fittings on either side are the clips for the springs off the hinged fender flaps to attach .

good fix with the travel lock issue and splendid attention to the details jenny!

i hope "soon" will be very soon for an update as i love this sbs!