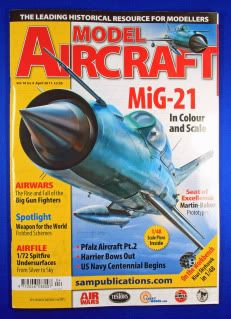 The second magazine from SAM Publications to cross my desk this month is Model Aircraft.

This title is also edited by Gary Hatcher, and is – in his own words, “designed for those who build models in conjunction with an abiding love of aviation, and an affinity for real aircraft”.

I’m not sure I agree with this argument, but while I’ve yet to find an aero-modeller who doesn’t love the real thing as much as the models he builds, it’s certainly explains the difference between Model Aircraft and SAMI.

Compared with SAMI, Model Aircraft has far less previews of kits and accessories. There is the usual mix of brief and in-depth reviews, but in this magazine there are a lot more reference photos and colour plates.

The main aircraft featured in this particular issue is the Mig21, with 15 pages of photos, colour plates and a kit build.

Another article featured the final British formation sortie of the legendary Harrier jump-jet. As someone who spent many happy years at BAE building these marvellous aircraft, I found this especially interesting and not a little poignant.

Other articles include the late-war Me410 heavy fighter, the Martin-Baker range of fighter aircraft, and the centenary celebrations for US Naval Aviation.

Text and photography are as good, if not better than that found in SAMI, which leaves me with one question, which magazine would I spend my hard earned money on?

As a former Aircraft Engineer, my vote would go with Model Aircraft purely because of the features of real aircraft.

This is another fine aviation title from SAM Publications. And thanks to SAM for the review copy.