Live Resin is a new company to the model industry but comes from the expertise of Yaroslav Padalko who is the driving force behind the Russian company Tank . Yaroslav has used the latest in 3D prototyping combined with his extensive knowledge in Resin casting to provide what I consider the most advanced revolution in modelling technology with weapons , this range will expand with full figures and lots more accessories in the pipeline .

The first of his releases revolve around the modern weapons of warfare , specifically US weapons to start with and as with the real weapons they consist of modular systems , the reason is quite simple , if you look at the Live Resin WEBSITE you will see beside each set a huge photographic reference to each and every item , but you will also see & to demonstrate this fact I will use some of these images , no two soldiers weapons are the same . From a variety of scopes , hand grips , torches and laser optics as well as magazines , even colors , it appears the customisation is endless .

The first releases I will deal with are the basic weapons and then we will look at the custom bits .

The subject of this review is the basic M4 Carbine which is the main weapon currently in use with the US armed forces around the world , one may notice a similarity to my previously reviewed 35002 US Army M4 carbine with rail interface system and in fact it is the same weapon but this version has the removable Picatinny Rail Cover attached . The Picatinny Rail Cover is basically an ergonomic and often camo colored cover over the Rail interface system . The rail interface system is the modular front grip , to which , front pistol grips , torches , laser optics , grenade launchers etc are attached . 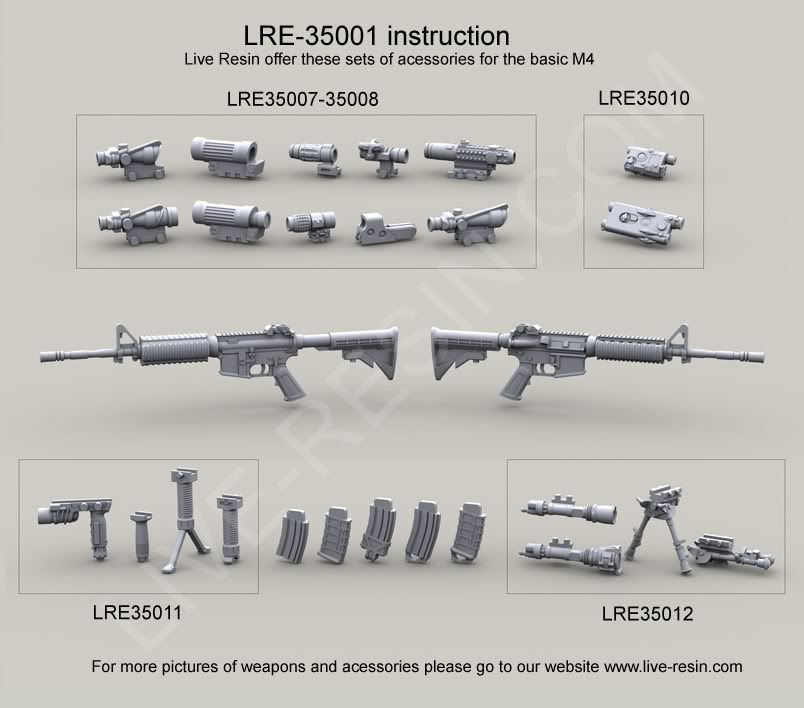 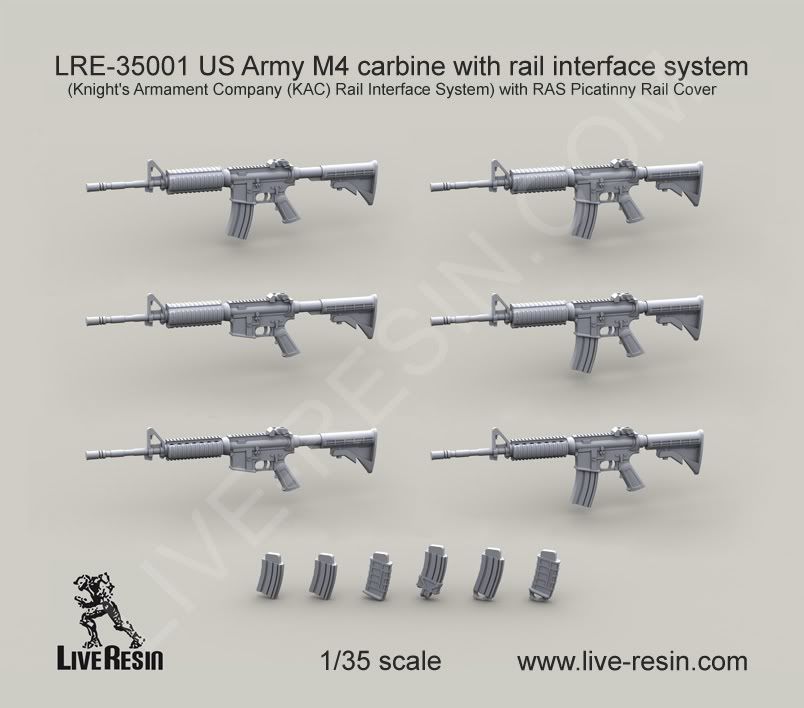 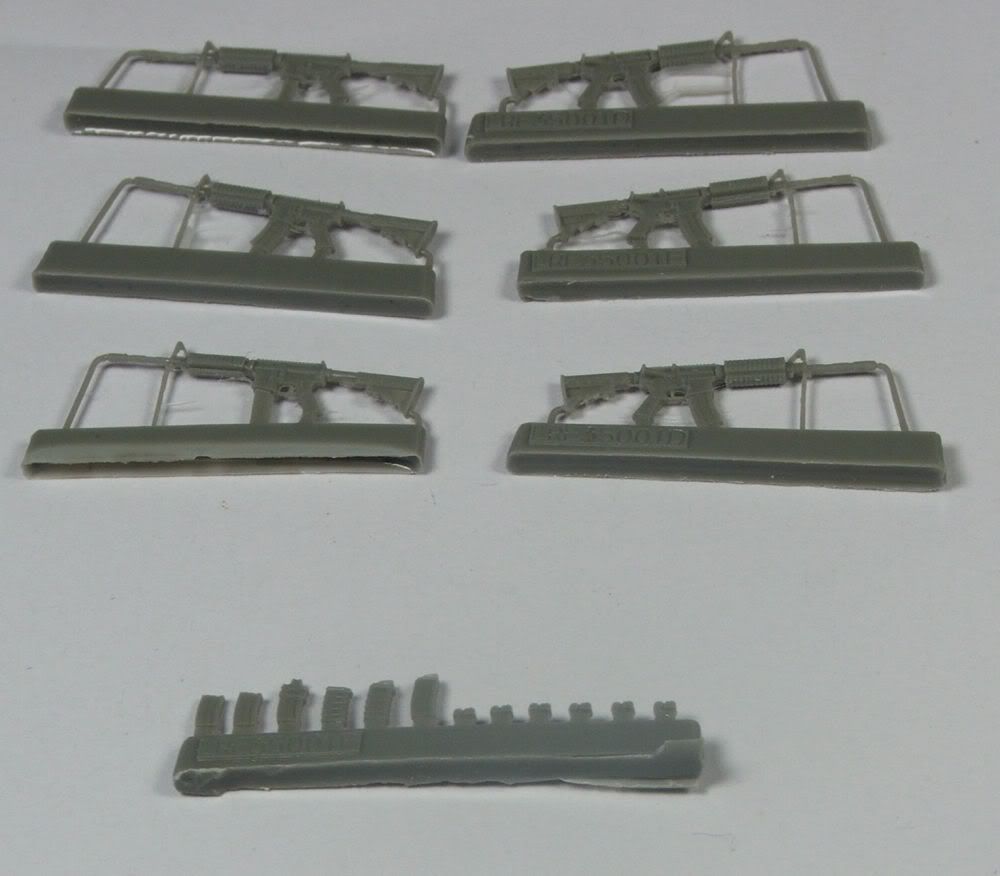 Well the parts breakdown is a little bit more complex than with set 35002 , The Picatinny covers can be mounted on each of the four rails Top , left , right and bottom four of the M4s have the full covers whilst the other two have the side covers see bottom left and second right above, the reason is quite obvious as these covers are more often removed for fitting of hand grips , bipods , torches and laser optics . three weapons come with butts extended and three with rifle butts retracted , two of the extended butt rifles have the magazine removed . There is also a set of six alternate magazines for the weapons with both synthetic and steel magazines as well as with and without magazine pullers to be used in the configuration of your choice along with six gunsight rail trolleys for non optic enhanced sighting 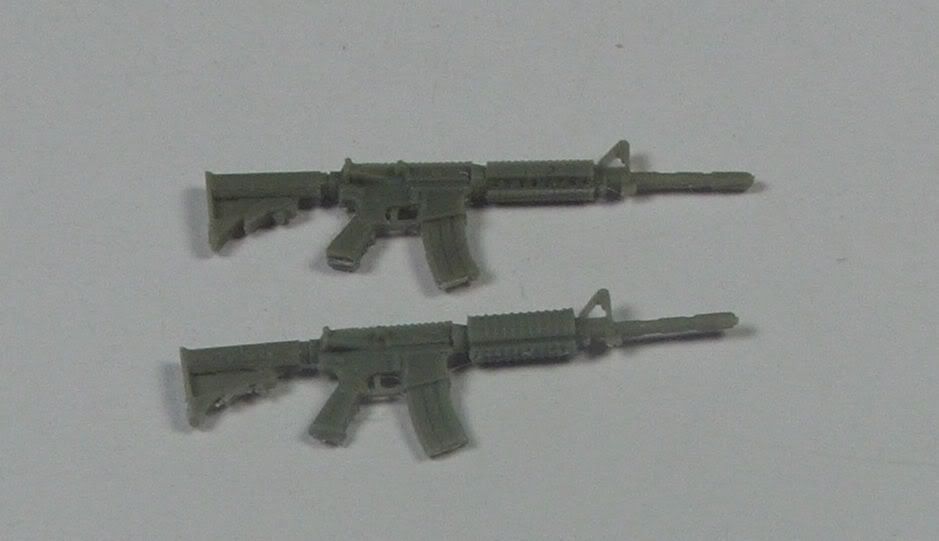 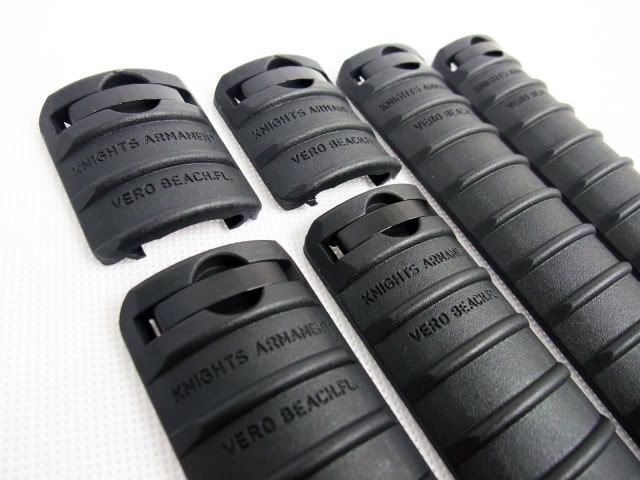 Here is a close up of the covers showing the quick release nature of the attachment mechanism to the rails , the whole system is modular , the Picatinny covers come in a set of eight , 4 x full size 2x 1/2 size and 2 x 1/4 size and they come in a variety of different colors , of course there are a lot of aftermarket companies sell compatible copies so the color range is infinite. 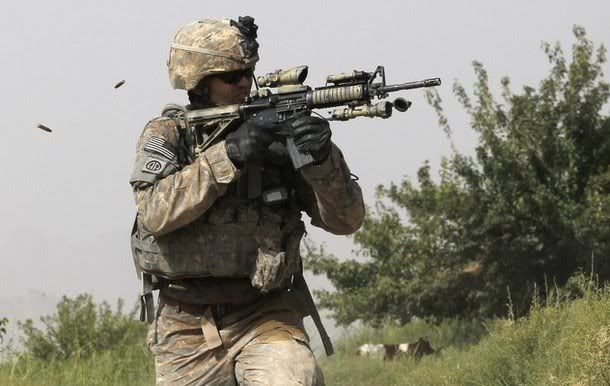 An airborne trooper fires his M4 He has the side covers in digicam , also he has matching digicam torch , scope , laser optics and rifle butt. 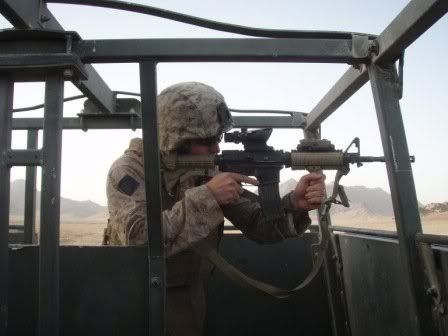 This soldier seems to have straigh sand covers on his M4 , note the 1/4 cover behind the handgrip and matching sand Laser optics and again matching rifle butt , showing covers and laser / grips etc are issued by color in a set 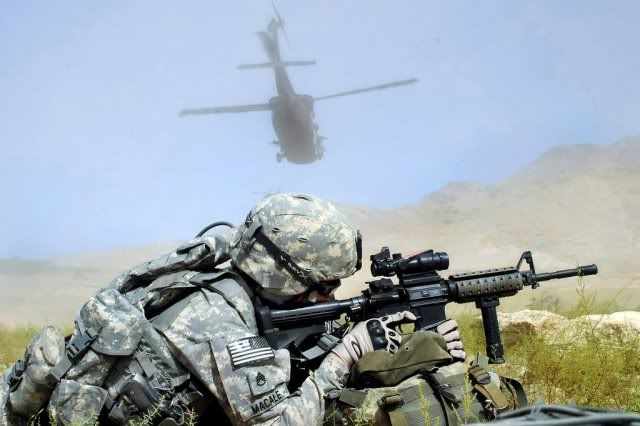 This soldier has covers all round including 1/4 covers on either side of the hand grip , the color woodlands . 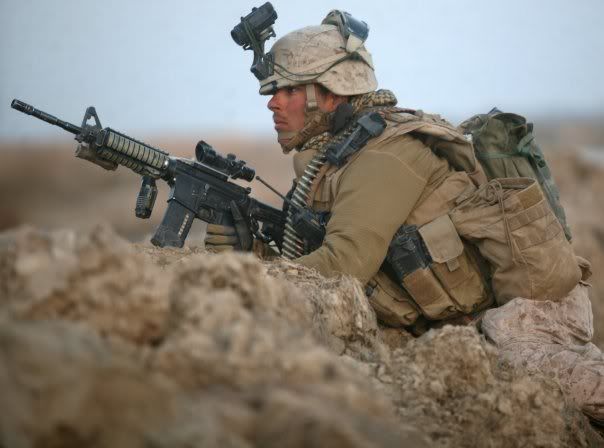 This trooper has a side cover removed for his laser optics and a half cover with his handgrip , note the difference in location to the handgrip of the soldier above , the advantage of the modern modular weapon system . 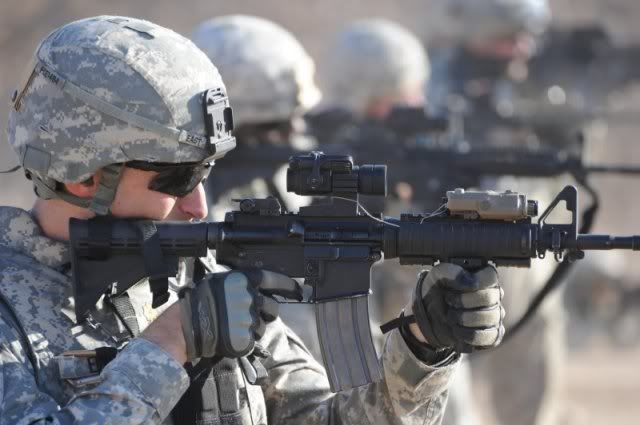 A good close up of the covers again , it is easy to see how this style configuration is modelled , just carve away carefully the sections of cover that is not needed . This time the covers are in black .

The whole series is available here in Australia through their exclusive stockists BNA Modelworld or for other distributors visit Live Resin for further details . As you can see the system is very affordable , lots of parts such as lasers and scopes are interchangable between a wide variety of weapons so the accessories as well as the weapons will come in very handy .

I Highly recommend these to all modern enthusiasts , with a huge range of weaponry , accessories and soon figures from a large range of eras will be available . My thanks go to Yaroslav at Live Resin and BNA Modelworld for the review items .