Master Box “U.S. Civil War Series”: “Attack!” 8th Pennsylvania Cavalry, 89th Regiment PA Volunteers Battle of Chancellorsville, May 2nd 1863 in 1/35th Scale.
By Shawn Gehling
This is Master Box’s 2nd release in the “US Civil War” series.
History: During the Civil War 1861-1865 Both the Union and the Confederacy widely used Cavalry units. During the Chancellorsville campaign, the 8th played a pivotal role in stopping General ”Stonewall” Jackson's Army. While riding down a narrow dirt road, the 8th charged the oncoming Confederate troops thus delaying their advance. Allowing the Union Army the time to deploy Cannons to stop them. This charge is known as one of the most gallant charges of the Civil War.
The Kit:
[img] 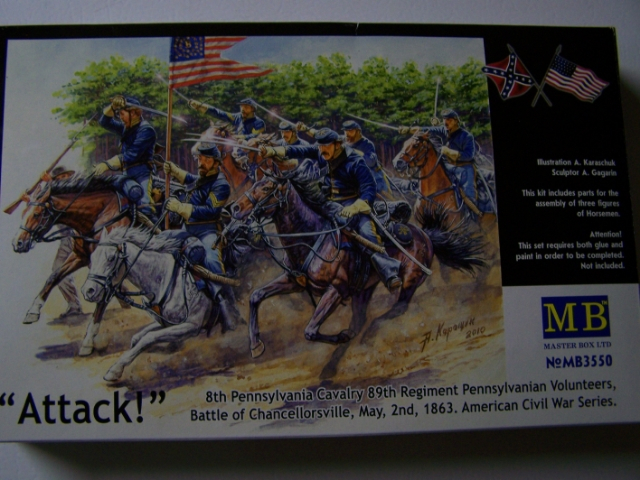 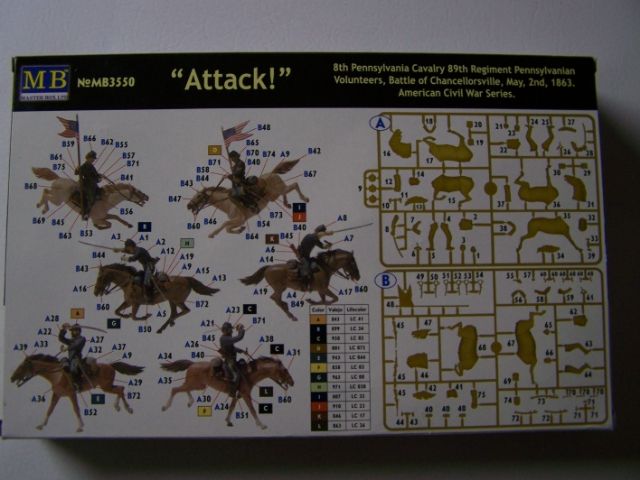 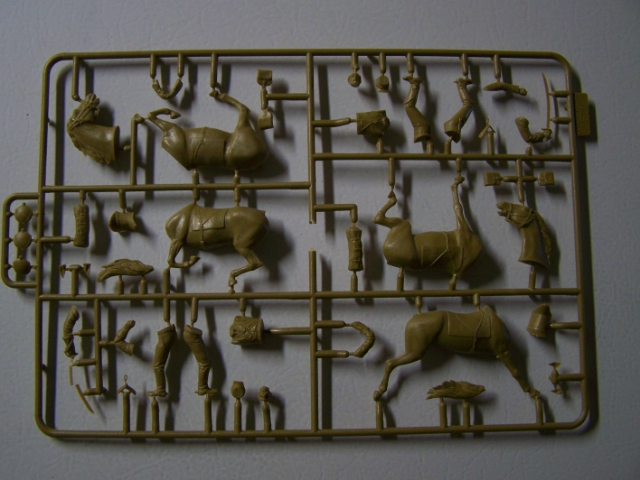 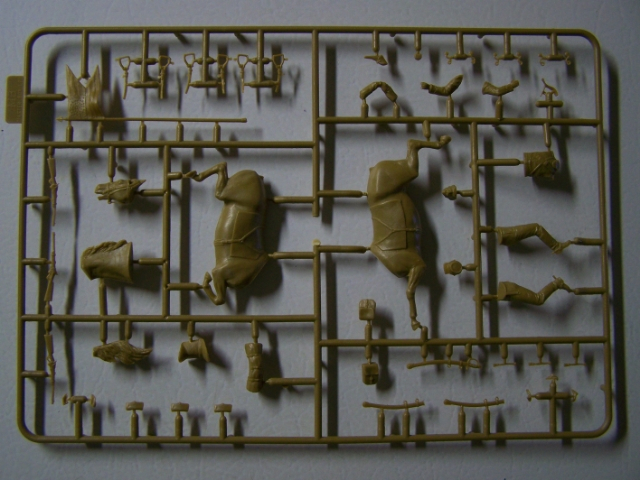 [/img]
It has three Union Cavalry figures and three horses: One “Colors (Flag) Sargent (whose horse is going down), One trooper charging and one Officer swinging his saber.
The horses are loaded with lots of tack and equipment. Blankets, saddle bags, canteens. The troopers have Cavalry carbines and scabbards hanging off them.
Conclusion: It appears that Master Box has another great release of US Civil War participants. (one of my figures sabers was broken during shipping). This is OK because I plan to make one a bugler.
I highly recommend getting one of the many Osprey “Men-at-arms” books that cover this era, or any of the hundreds of books that cover this subject where you will find all the information you will need to accurately paint these figures and horses accurately.
Overall this should build into an outstanding replica of members of the famous 8th Pennsylvania Calvary, 89th Regiment Pennsylvanian Volunteers from the Battle of Chancellorsville, May 2nd 1863 and is highly recommended for anyone who enjoys figures. I would like to thank Alexander Surzhenko of Master Box Models for the review kit.
Here is a link to the photo bucket album so you can see the full sized pictures:
http://s573.beta.photobucket.com/user/shawngehling/library/Master%20Box%208th%20PA%20Cavalry%2089th%20Reg%20PA%20Volunteers
Shawn

I am glad you got this set too Shawn as I know nothing about this war , what I can say are the horses are beautifully sculpted and totally anatomically correct , they could also be used for horses from other periods for the sculptors who want to fashion a new rider .

Thank you for the review Shawn

Jenny,
I guess I should have contacted you? Glad you didn't want to do this one. I love the figures and the horses (Although I hope my daughter doesn't see this set, or I could be 3 horses short). She has her own horse, but that wouldn't stop her from taking them from me.

I told Alex that I can't wait for this set to come out here too, as I would love to have another set to go with them and make a packed in cavalry charge, just like on the box.
My only complaint (and it's really not a complaint).

Is how cool would it have been if they had a period revolver (maybe a Colt Navy type) or something like that which could have been put in one of their hands.

Here is the unit history for that day/charge:
What more can be said???
On the morning of the 2d it re-joined the brigade*, and with the Seventeenth Pennsylvania Cavalry was formed in an open field in rear of General Sickle's line of battle.

"As I was going back at a trot," says General Pleasanton, "an aid-de-camp came up to me and said, 'General, the Eleventh Corps is falling back very rapidly, and some cavalry is necessary to stop it.' I understood pretty well what that meant. I had only two regiments of cavalry with me; [Eighth and Seventeenth Pennsylvania,] one of them [Sixth New York] having been retained by General Sickles at the front to protect his right, and there was one battery of horse artillery with me. When I came to this open space which I had before left, I found it filled with fugitives, caissons, ambulances, guns, and everything. I saw the movement was critical, and I called on Major Keenan, of the Eighth Pennsylvania, and gave him his orders.

'I said to him, 'Major, you must charge in these woods with your regiment, and hold the rebels until I can get some of my guns into position.' Says I,' You must do it at all cost.' I mentioned the Major because I knew his character so well; that he was a man for the occasion. He replied to me with a smile on his face, though it was almost certain death, 'General, I will do it.' He started in with his whole regiment, and made one of the most gallant charges in the war. He was killed at the head of his regiment, but he alarmed the rebels so much that I gained about ten minutes on the enemy. Major Keenan had only from four to five hundred men."* The enemy which this single regiment was sent to check was the front of Stonewall Jackson's Army, which had just fallen upon and routed the Eleventh Corps, and was rushing on in a resistless torrent to new conquests. It was one of those critical moments, which is the turning point in the fortunes of an army. Should Jackson gain the commanding position on this open ground just before him, and now almost within his grasp, he would sever the Union army and hold it at his mercy. But if he could be kept in check for a few minutes, until Pleasanton could bring his artillery into position, this commanding ground could be held. A fearful sacrifice must be made. It fell to the fortune of the Eighth Pennsylvania Cavalry to make it. Like the man who is willing to part with a limb for the preservation of his life, Pleasanton, knowing the critical posture of affairs, promptly gave the order for the regiment to advance. As promptly it obeyed; and taking a narrow wood road, with room only for two horsemen to ride abreast, Huey and Keenan leading, it dashed forward and was soon in the very midst of the rebel hordes their skirmish line occupying the woods to the right, and their line of battle, plainly visible not more than seventy yards distant, on the left. Major Keenan at the head of the first battalion, calling on his men to stand by him, ordered**them to draw sabre and charge! Reaching the plank road by wheeled to the left, and dashed with his trusty followers full upon Jackson's infantry. He was instantly assailed with fearful volleys, and his little band almost annihilated. By this bold manoeuvre the enemy was startled, and time was given Pleasanton to get twenty-two pieces into position, double shotted, bearing upon the menaced front; and when, in dark masses, the rebels swarmed from the woods, in a charge upon his guns, he swept them-with terrible effect, and completely checked the further progress of their army.

After the battle General Pleasanton issued a congratulatory order to his division, in which he says:

"The distinguished gallantry of the Eighth Pennsylvania Regiment, in charging the head of the enemy's column, advancing on the Eleventh Corps, on the evening of the 2d inst., has excited the highest admiration.

* * The gallant M'Vikar, the generous, chivalric Keenan, with one hundred and fifty killed and wounded from your small numbers, attest the terrible earnestness that animated the midnight conflict of the second of May." Captain Charles Arrowsmith and Adjutant J. Hazleton Haddock, were among the killed.

Did you get any of the other new releases? British Weapons or WW-II Woman?
This was the only kit that arrived here.
Shawn