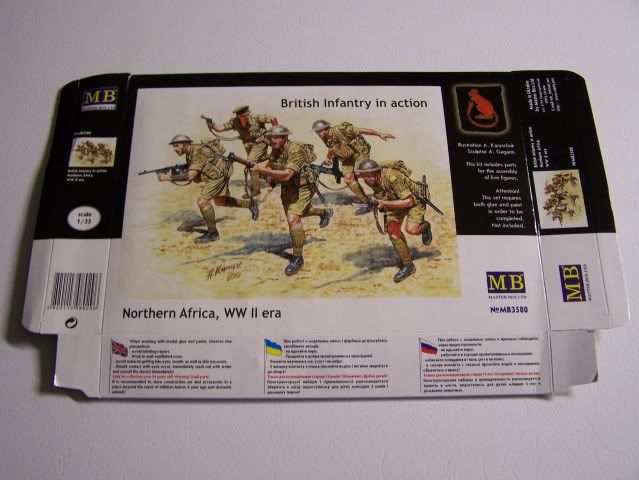 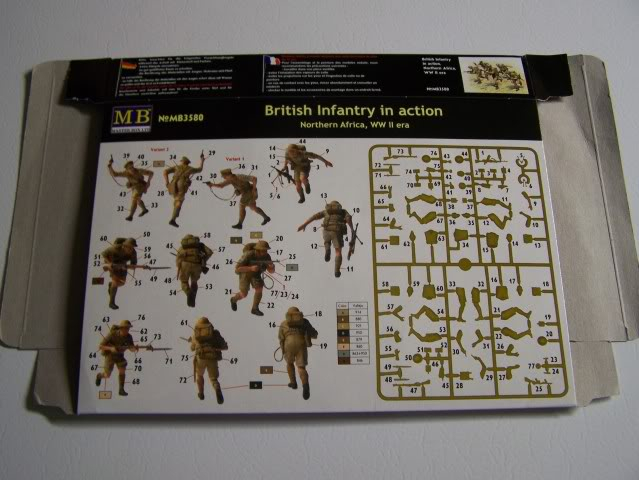 This is an exciting set based on five British “Desert Rats” Infantry soldiers advancing into battle. 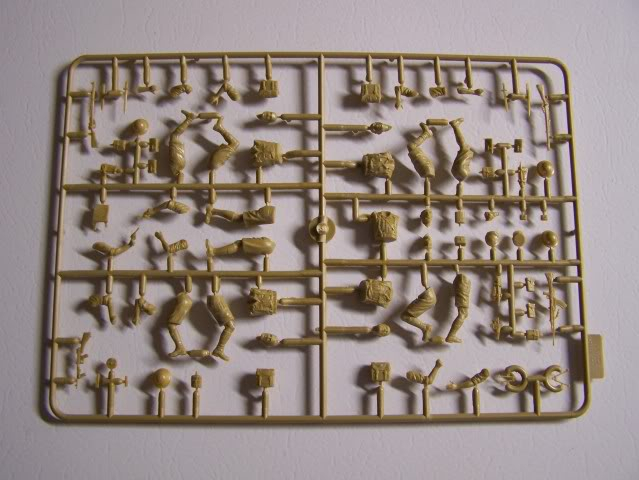 Contains 1 sprue with 76 pieces that have no flash.

It has five British Infantry advancing towards battle. One officer (with a pistol and comes with two right arms for variation). One NCO with the Thompson SMG (The Thompson machine gun appears to be the M1928A1 (which had the fore grip and had its charging handle was on the top of the receiver. They also give you the 50 round drum, a 20 and a 30 round box magazines. And three enlisted one with the Bren gun and two with Lee-Enfield rifles.

Conclusion: It appears that Master Box has given us another great looking figure set to support King and Country in the deserts of North Africa..

The uniforms and equipment are covered in numerous books, so information on these should not be too hard to find.

My “Build Review” should follow in a few months Overall this should build into an outstanding replica and is highly recommended for anyone who enjoys figures. I would like to thank Alexander Surzhenko of Master Box Models for the review kit.

It's great to see another set of British North Africa figures with the Lee-Enfield No.1 Mk III rifle and the long sword-type bayonet for it. Another nice feature is that you get the naked bayonet and a separate scabbard for it.

The old Tamiya British 8th Army figure set had the Lee-Enfield No. 4 rifle paired with the Lee-Enfield No.1 Mk II bayonet which is a combination that could never work in real life since the bayonet attachment points were totally different ob the two rifles.

Master Box does a great job of listening to and utilizing feedback from its customers.

Thanks for the review Shawn. Are ou going to try and mix and match any of the figure parts?

Peter,
Thanks, I don't know... They look pretty cool the way they are, but if I pick up another set, I might get a bigger squad doing for an all out assault.
It is great that Master Box does listen to the modelers that frequent their site...
If you haven't been there, go. Then go to the Guest book and tell them what you would like to see for figures in plastic. Alexander will (as far as I know he answers every question posted on the site) That's how I met him. And as Peter says, they listen, as in this set... Before they go to production, they show off what their new kits will look like. As with this set, the weapons were wrong, and Modelers and Gun dogs from all over told them so, (AND THEY FIXED IT) before it went to production. How many other model companies give you a sneak peek and fix the errors that are pointed out?
Good on you Master Box (Alexander).
I got an E-mail from his last week stating that they were off to the Nuremberg Toy Fair, so stand by for some more new stuff when they return.
Shawn

This is the set that give you the British soldiers that will go with the Hand to Hand combat North Africa set.

The German set has yet to be released but what a diorama you could make with these.