The changing world of warfare , when armies no longer wear uniforms and where there are no distinct battle fronts , when buisnessmen are being abducted and buisness enterprises are threatened , protection goes beyond the military to the Private Military Contractor (PMC) who is employed to protect civilian concerns . Military trained but working for the private sector these men are usually ex special forces , wearing a mix of military & civilian clothing but true professionals .

With such vital assets being predominant on the battlefield it is only logical that these PMC's are now available in kit form . Enter New World Miniatures with this kit of Private Military Contractor "Pablo" . 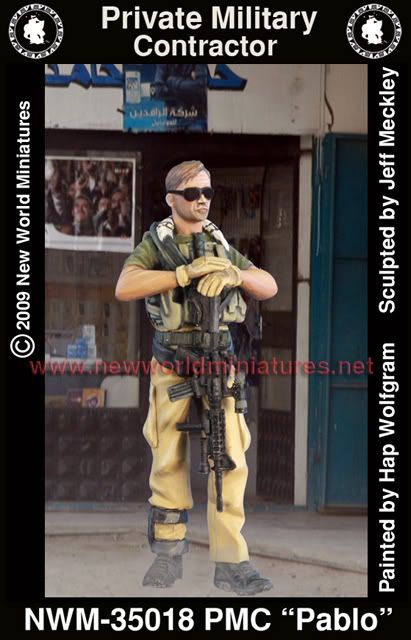 Sculpted by Jeff Meckley , in my opinion , the leading sculptor of Modern era figures who is the sculptor behind the Think 180 figures , this resin figure is beautifully sculpted in a very cool stance 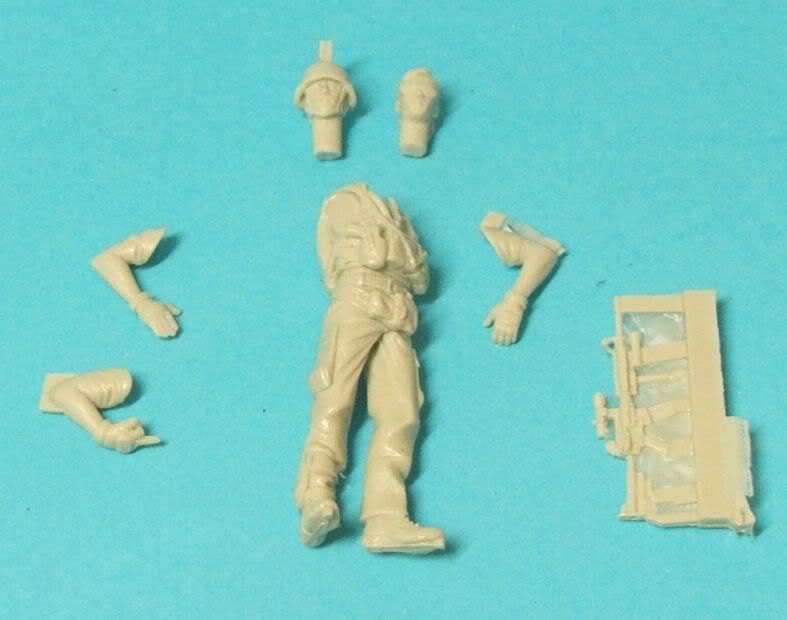 As can be seen Pablo comes with a choice of two heads , the box art hatless figure with the cool shades and a figure wearing the standard US Ballistic Helmet without camouflaged cover . 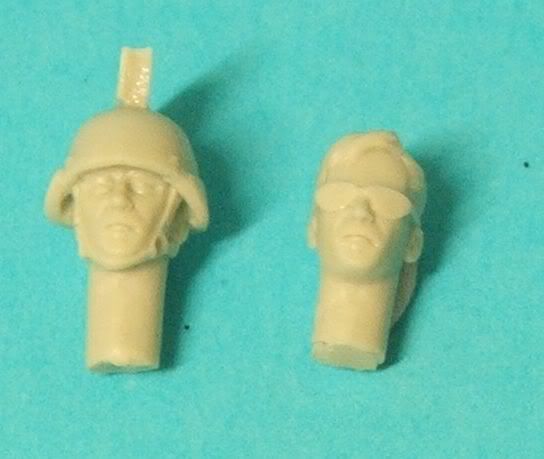 Further it can be seen the figure comes with alternate right arms , the one on the box art is resting on the left or the alternate gesture "Flipping the bird" possibly to passing "regular soldiers" or other colleagues . 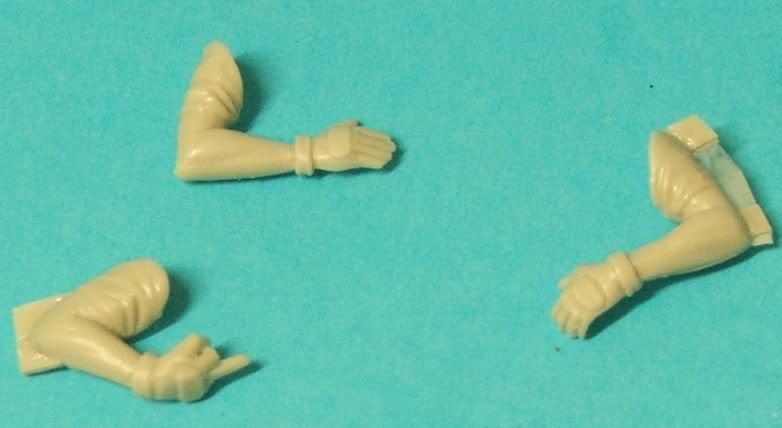 The beautifully detailed AR-15 M-4A1 needs careful handling to remove it unbroken from the sprue , first cut the large pour sprue from the bottom , then cut each individual runner from the gun , then remove the flash 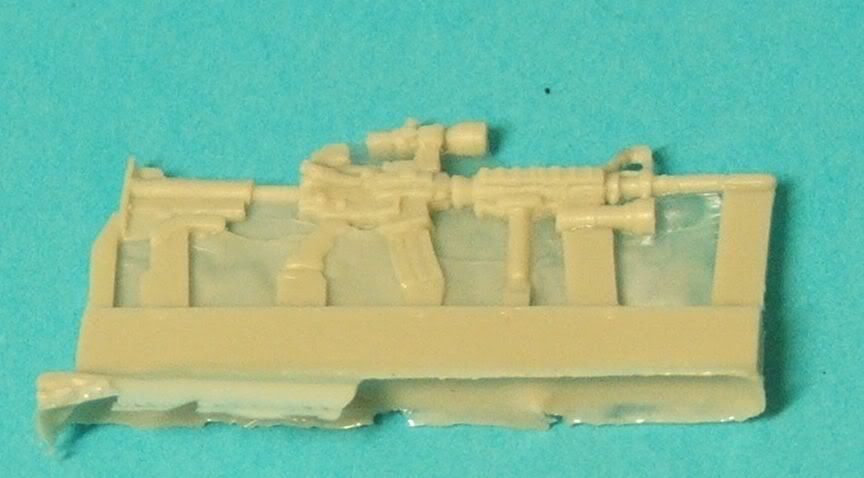 Voila , we have a lovely detailed assault rifle (some more fine clean up required)

The detail on the main torso/leg casting , some minor flash on the legs , a sharp scalpel will soon clean that up , note the reversed fanny pack , texture of the belt , the pistol holster and ammo pouches on the Molle vest . 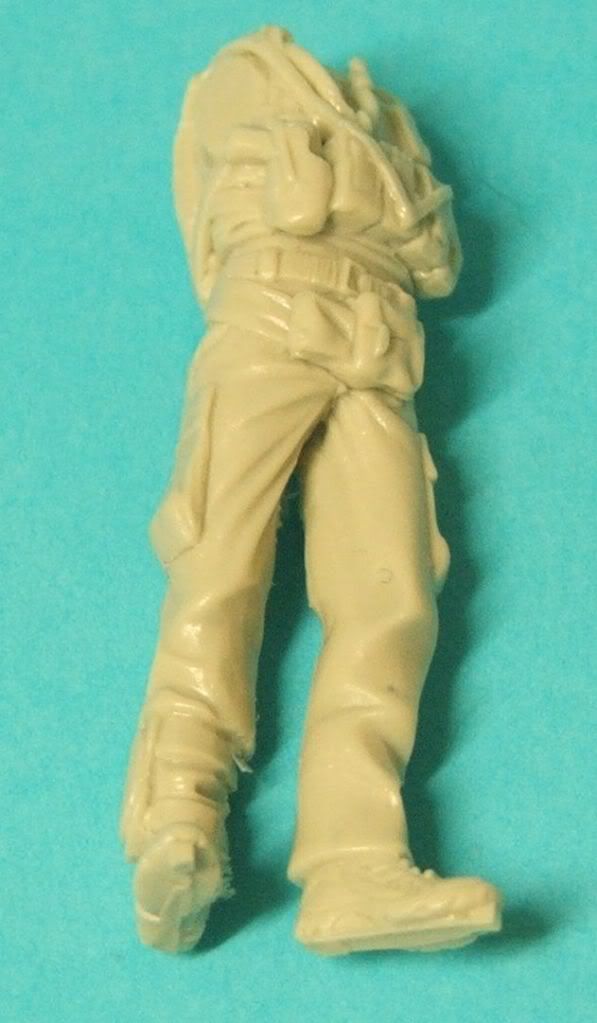 The detail continues on the back of the figure , note the detail of the surecatch on the fanny pack belt , superb and the camelback hydration system , the knee guard pad charecteristically worn around the ankle and the converse air sneakers ! 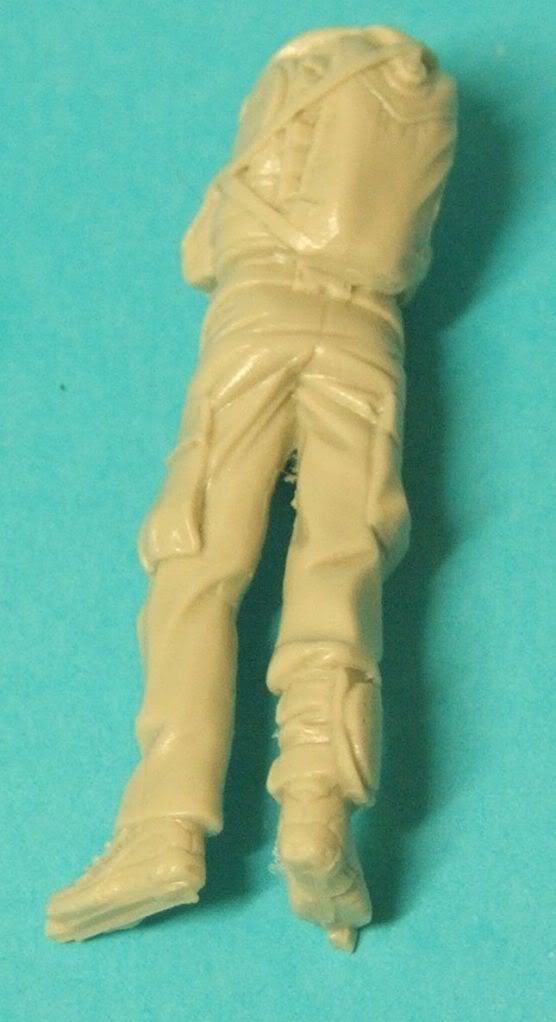 The figure assembled as of the box top , note the right arm & gun is blue tacked in place for the review and the head is a good fit without glue . Note the detail of the neck scarf and the mouth piece for the camelback . 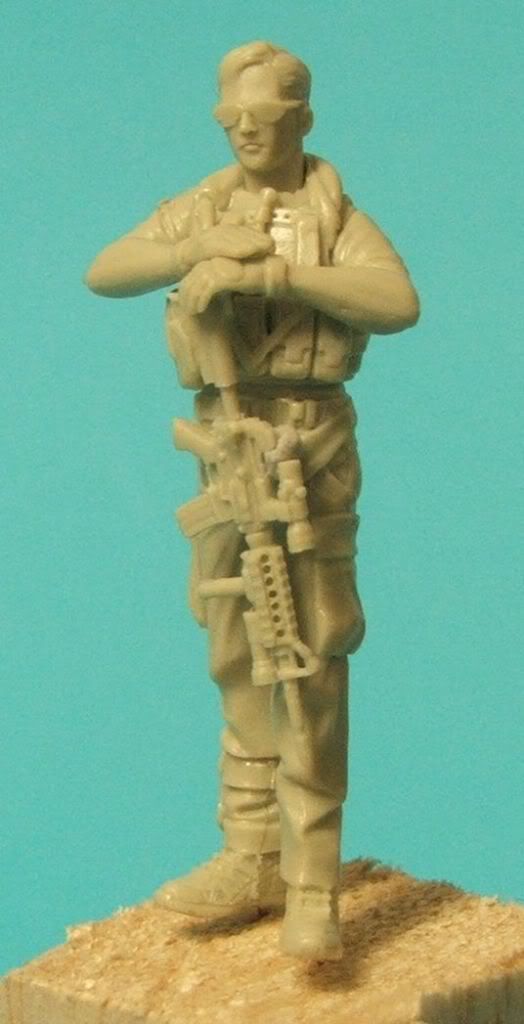 And here the difference of the alternate head and right arm , it is hard to believe it is the same figure . Evident is the close fit of parts , remember the right arms are not even attached but are a perfect gap free fit ! 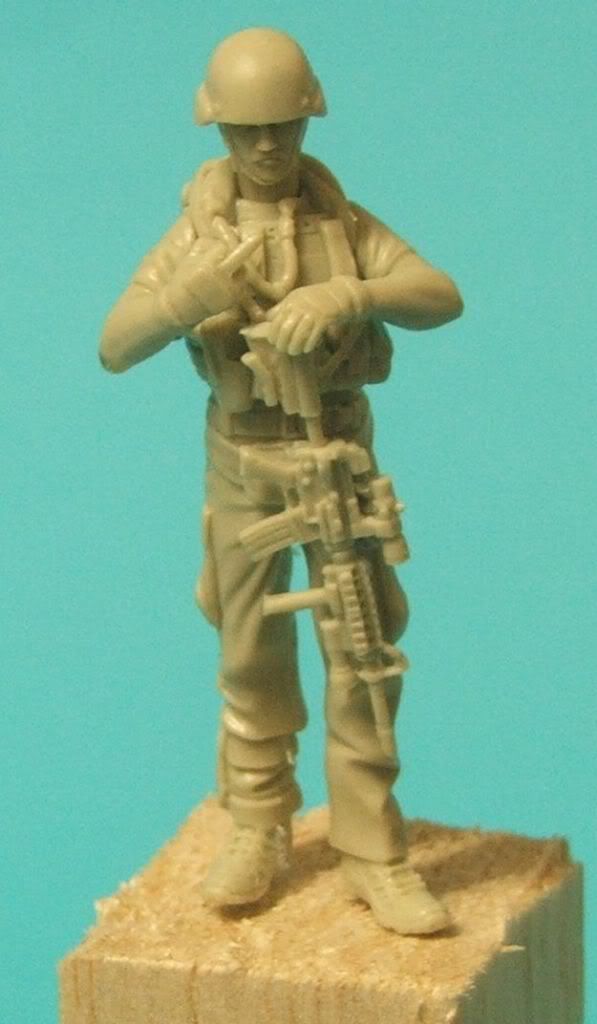 The nature of the "uniform" of the PMC means that these figures are easily adaptable to be US Military with little to no conversion , specially as a Special forces operative perhaps .

Beautifully detailed , superbly posed figure , if your genre is modern , then treat yourself to this awesome figure . My thanks go to Chris Mrosko of New World Miniatures for providing this figure for review . You can see this and other figures on the New World Miniatures Website

Ha! Well at least he's got a sense of humour. This dude would look quite nice against a HMMWV and done up as an SF soldier as Jenny suggested. Oh the possibilities.

Both of the PMCs of New World Miniatures look superb. I bought Rambo figure as I read Jenny's review and I can say sculpting and casting are really great. Just need a short cleanwork and maybe a little care for the correct fit of M4 to armpit when assemblying the right arm and hand carrying the rifle. Alternative head is also a great bonus.
Jeff did great job on both of the figures,maybe he can see this as the third one.

Sweet looking character you've got there.