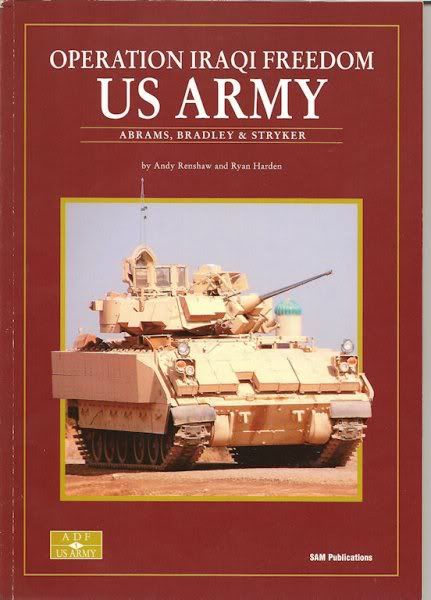 SAM Publications specialise in books and magazines for the model builder. This book deals with the three primary armoured vehicles used by the US in Iraq, providing references and a model build log for each vehicle.

The book has a soft cover and high quality glossy pages, which are packed with photos. All are colour and have captions pointing out the many important features therein. Unfortunately a number of the images are really too small, and the features noted in the description cannot be seen.

The Introduction gives a brief description of the conflict in Iraq, or at least up until the defeat of Saddam's forces in 2003. I noted one interesting fact here - Operation Iraqi Freedom (OIF) was originally called Operation Iraqi Liberation (OIL). I wonder why they changed it?

Part 1 of each chapter gives a history of the vehicle development, descriptions of the variants, and some information concerning it's combat history. The information is moderately brief but informative, with lots of photos. There is some ambiguity in the text concerning the M3 Bradley, where it is referred to by several different terms including ICV, CIV, and CFV, none of which are in the glossary. I believe the correct term should be CFV (Cavalry Fighting Vehicle).

Part 2 contains walkaround photos of each vehicle. As you would expect, they're not as comprehensive as the images that can be found on the net, but useful enough for the average modeller, I think.

Part 3 of each chapter has 6 colour profile illustrations for each vehicle. A variaty of colour schemes, markings and equipment are shown.

Part 4 contains the model build logs. These are my favourite parts of the book, 44 pages devoted to the building of three very nice models.

The Abrams is a Tamiya M1A2 upgraded with 'TUSK' augmentations from Legend and Voyager. This build is a little tame compared to the others, leaving some of the lesser flaws uncorrected and with very little in the way of stowage and weathering. It is nice model, just the same.

The Bradley is the Academy M2A2 kit, with flaws corrected and ERA tiles added using Legend, Eduard and other products and materials. This build is more involved but the results are very impressive, a stunning result.

The Stryker comes from AFV Club with slat armour from Griffon Models, PE by Voyager and stowage from Legend. The slat armour is an extensive and very daunting addition, but the author sets out some proceedures to make the assembly easier. This is another very impressive model, an outstanding example of what can be achieved with todays products and some skill.

The step by step layouts of these builds are very well done, showing products and techniques used at every stage. The final, complete builds may be too ambitious for a lot of modellers, but there is much that can be learned here by any model builder. My only complaint is, again, some of the photos are too small.

Appendix I - IED's - An Overview gives a short decsription of the Improvised Explosive Devices menace, with some images of US Army vehicles which have fallen prey to these devices.

Appendix II - Kitography apparently lists all full kits and after market products available at the time of writing, for the three vehicles featured in this book and their variants. This is a great feature, and also includes some notes to help the modeller sort through this plethora of products.

To conclude, I have to say I found this book more than useful, but also inspirational. In regard to the Bradley and Stryker in particular, if you intend building something approaching an accurate miniature of either of these subjects, then I would consider this book a 'must have'. 8/10

Thanks to SAM Publications.

Thank you John for the review ,

it sounds like this book was right up your alley , considering your own amazing Abrams you just finished . The vehicles seem to be evolving as we speak so I guess that it is a hard topic to write as a definitive guide when these vehicles are still in service .