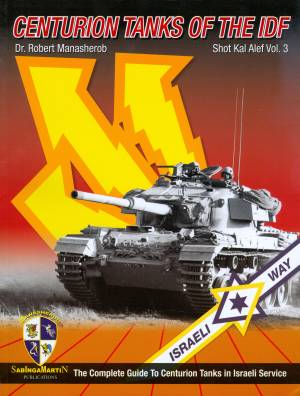 With the release of AFV Club's Centurion series, I was happy to see the IDF variants amongst them. References on the vehicles are not many with only a small section dedicated to the IDF. Therefore, I was glad to learn about Dr. Manasherob's book since he is also one of the consultants who helped ensure that AFV Club's kit was accurate. I therefore ordered the book as soon as the author announced in in a modeling forum.

In the Priority Mail envelope, I found a soft cover book measuring 8.5 inches wide by 11 inches tall and 80 glossy pages within the two heavy cardstock glossy covers. It utilizes perfect binding which will probably be damaged thanks to the heavy use I am planning for it.

Color is used throughout even on the tonal photos which in some cases have slight and attractive sepia tones to them. Flipping through, I saw many period photos, color detail photos, scale plans, and color profiles. I prepared myself a cup of coffee and sat down to read the text.

Once I was past the color cover artwork, the inner cover provided some details of the labor of love this book is for Dr. Robert Manasherob. The name of the publishing company is based on the names of his children. They are listed in the acknowledgments along with many others who helped.

What follows are 295 photos, 74 of which are tonal photos with the rest being in color. The tonal photos are clear and in several cases show details which are usually censored. While they are in a chronological order, with excellent captions that go in depth, they do not necessarily follow the text.

The text goes into detail about the needs of the IDF, Centurion procurement, and the decisions which led to the upgrades such as the engine. Then it covers the race to get the Centurion tanks upgraded to the Shot Kal Alef variant which meant that half of the Centurion tanks tanks were ready for the 1973 war. Factory photos are included to go with the detailed descriptions of the upgrades. On the pages with the main text, photos are kept to one a page. This is then doubled and on a very few occasions tripled.

Eleven pages of 25 1/35th scale plan views are included. These included detailed captions which cover the suspension, wheel, and fitting details. Some of the plans are used to illustrate field modification shown in photographs.

The color section contains 221 photos covering every imaginable detail of the Shot Kal Alef Centurion including rare bottom views of the extended hull.

Arkadiusz Wróbel’s artwork includes nine color profiles and scrap views of markings found on the Centurion. The rear inner cover is a testament to the amount of information that is being put out in this volume. While the rear cover displays a blurb for the book, the inner cover has more text on the markings, camouflage, and a very brief biography of the author.

The obvious omissions from this volume are sure to be addressed in the following prequel books. The author did e-mail me about the Mark designations used in the book:

“According to British nomenclature, the difference between Mark 3 and Mark 5 Centurions was the replacement of the co-axial Besa machine gun with the American Browning gun. In Israeli service, all Centurions that had the early loader’s periscope positioned in the main roof in front of the loader hatch were designated as Mark 3s, while all Centurions with the loader’s periscope on the forward face of the turret roof were designated as Mark 5s. For the purposes of identification in this book, I have used the Israeli designations for the different Centurion types.”

This book is highly recommended and serves to whet the appetite for the following books. I found myself inspired to look at the AFV Club Centurion kits in my stash. The book can be ordered directly from the author by e-mailing him: sabingamartin@yahoo.com