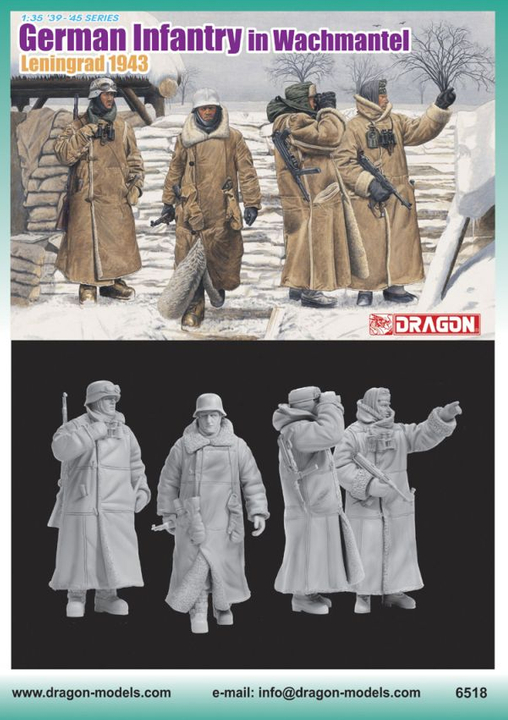 "Dragon’s latest 1/35 scale figure set depicts German sentries maintaining the siege of Leningrad. It shows a changing of sentry guard in the depths of winter. To shield themselves against the bitter and penetrating cold, these German soldiers wear thick sheepskin overcoats, albeit with slight variations of uniform. The footwear of the sentries also varies, with cold-weather overboots, snow boots and even Valenki boots in evidence. Valenki boots, made from felt and thick wool, are a traditional form of shoe worn in Russia. The soldiers are sharply molded in plastic, and they are produced in lifelike poses. They also wield different weapons appropriate for their task. These extremely refined figures lend themselves to a diorama or vignette of a dugout or sentry post in the chill of winter. On the other hand, they are versatile enough to be fitted into any scene the figure modeler can imagine! "

Quite interesting. Some of those figures would work well with the Master Box watchtower.

Hehehe Richard , I was thinking the same thing !

We must be on the same wavelength , do you like Chocolate & Shopping for models too ?

Oh, that could be a nice cold vignette...