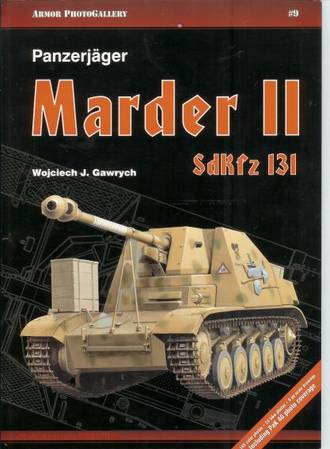 This book Panzerjager Marder II Sdkfz 131 is an excellent reference book for anyone who is contemplating the new Dragon Marder II kit .

The book is divided into four sections , the first 26 pages are a series of walkaround / walkthroughof the excellently preserved Marder II at the Pansarmuseum in Axvall, Sweden , every single fitting , from the suspension , to the Transmission every fitting & fixture is explained & photographed all in full colour .

Secondly as a bonus is a four page walkaround of the Pak 40 on a field carriage seperately , again an excellently preserved example , this time at the Panzermuseum Munster in Germany , again beautifully photographed in colour & an excellent reference for Marder , 234/1 ,251/22 or straight Pak 40 model builders .

The third part of the book is 9 pages of scale line drawings that show both early & late production drawings of the vehicle from all four sides & above in both 1/72 scale & 1/35 scale , a pair of drawings in 1/24 scale , one of which is a handy cross section with explanations & a view of the early & late suspension variations in 1/48 scale .

Finishing the book is 14 pages of Marder IIs in action in WWII , the photos are all new to me at least & show vehicles from Russia , Hungary , France Italy & North Africa . Fascinating images with the crew of one vehicle having a tortoise race on the rear ammo boxes to beautiful shots of a vehicle called \" Kohlenklau \" . Various colour schemes (Panzer Grey , Dark yellow , two & three colour camo ,in both lines & spots & even whitewashed variants are included . Various vehicle names & markings are highlighted as well . For me though the variety of scenery , from Windmills , to traditional Russian housing to my favourite of a Marder II in North Africa with a Mosque & Minnarette like the ones recently released from Verlinden getting the cogs turning for diorama ideas .

All in all I rate this book with all english text as an excellent reference book , I would class it as compulsory if you have a Marder II unbuilt or if you haven't you probably have all the inspiration you need to build one with this excellent publication .