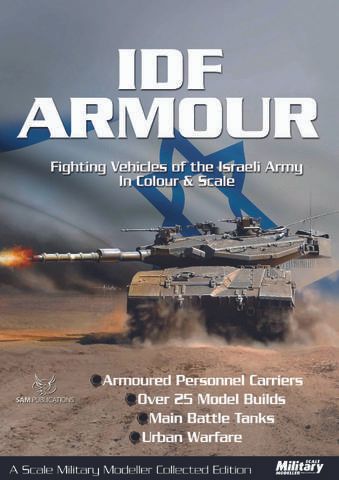 -Fighting Vehicles of the Israeli Army-

The modern Israeli Army has some of the most potent, eclectic and unusual tanks, infantry fighting and combat-engineering vehicles in the world. This Scale Military Modeller Magazine ‘Special’ offers the enthusiast and modeller a unique combination. For the first time in one publication we have not only a detailed look at the fighting vehicles of the IDF, but also seperate features on how to build scale models of over twenty-five different subjects - from the Merkava MBT to the D9 Bulldozer, with step-by step guidance from master modellers. IDF Armour - Fighting Vehicles of the Israeli Army – is shaped into three main sections: Main Battle Tanks – including the Merkava I, II, III and IV, the Magach, the Tiran, the Shot-Kal, the M-50 and M-51. Armoured Personnel Carriers – including the Puma, Namer, Machbet, M113, and M113 Zelda. Urban Warfare – including Nachmachon Dog-House, Nachmachon with Mine Rollers, Nagmash, Kasman, Machbet and D9. Each chapter has background historical text on each type, and in action and detail photography. IDF Armour - Fighting Vehicles of the Israeli Army is a must have for any aficiando of the Israeli Army.

This new 100 page publication will be available soon and priced at £9.99, and to guarantee your copy you can pre-order IDF Armour - Fighting Vehicles of the Israeli Army by contacting sarah@sampublications.com. http://sampublicationsfrontpage.webs.com/index.htm

Re: New from SAM Publications

I cannot wait! to get a copy of a book the builds will be a sure help and I am keen to see the reference pictures though I best get to work on my Magach!