'Converting and Detailing Plastic Figures ' By Bill Chilstrom is a beautiful book , concentrating mainly on a magnificent diorama by the author called "In the Footsteps of the Grand Armee 1945" it draws similar lines to Napoleons own retreat from Russia , the emphasis that the only transport shown is horse drawn goes to further the similarities with the exodus of the French forces . 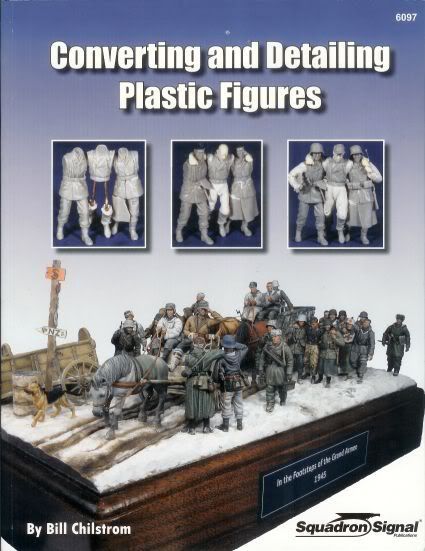 What the book concentrates on is how to use plastic figures in a diorama , this varies from minor twists to replacing heads with resin items to full multi figure interaction conversions . Nothing that Bill describes seems daunting , every stage is dealt with in step by step detail in full crisp colour photography .

Bill talks of the materials he uses , others materials available , the pluses & minuses of each . Every page has handy tips in abundance .

All of the figures used are of Dragon origin ( though some you would never tell ! ) but Bill also gives a analysis of the major "Players" in a description at the back of the book .

Only a brief few photos of some of Bills other amazing works are included as well . The book is not a painting guide although there is a lot of photographs of the finished figures besides WIP painting , but as the title says a conversion & detailing guide . No doubt Bill will cover the painting side in a future release .

If you are interested in modifying figures to suit a need , then this book from one of the worlds best figure sculptors & painters is a must have .

Highly recommended , I got my copy as a christmas present , autographed by Bill & have not put it down since .

I got my copy just a little while ago. I have to agree. It's a great book to have. Very helpful. And nice big, clear pictures too.

Will buy this one soon

noir
Be nice to me I am new

Not a bad book

Not a bad book.
Panzer