I've often heard people express shock that I used kit tracks. Everyone seems to think you need to buy AM workable link by link tracks to get the job done, to allow you to paint the hull properly or to get the right sag. In my mind, nothing could be further from the truth. Nor is there any validity to the argument that it takes too long to clean the kit supplied links if you've ever had to drill out the track pin holes in metal link to link tracks.

This first installment will deal with a vehicle without return rollers and with single wheel drive train which already has it's fenders in place or whose hull extend over the track run. Nearly the same procedure can be used with a vehicle with twin wheel drive train and no return roller. I chose the DML ZSU-23/4m simply because I have it entered in the "I hate flying thingies" group build. I am aware of the issues with the running gear of the kit but decided to forgo the expense or replacement wheels and tracks. I also did not bother to drill the mud clearing holes in the sprockets.

Okay, so your wheels/idlers/sprockets (henceforth "wheels") are assembled, your track links removed from the sprues and cleaned up. 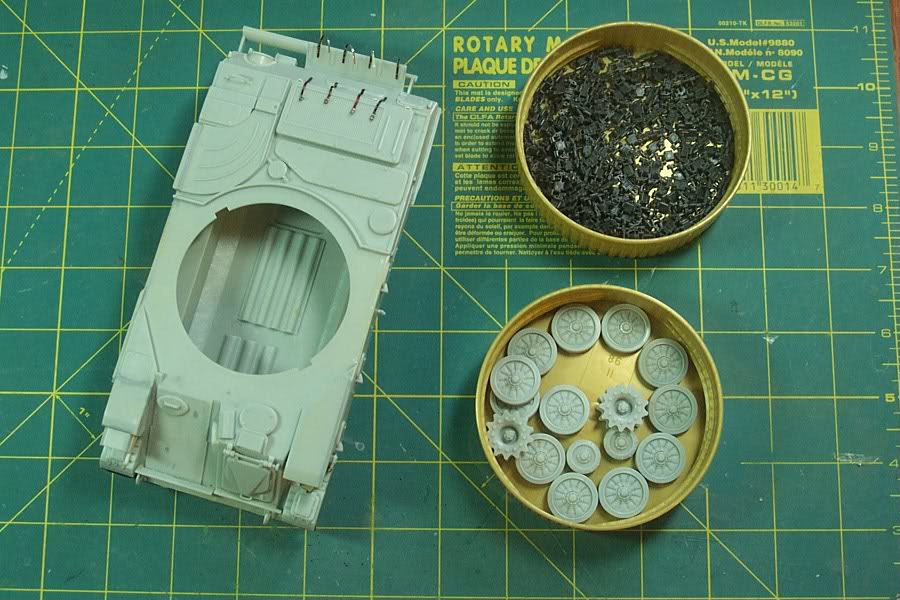 The very first step involves fixing your wheels to the model without any glue. Often the wheels will be too loose on their axles to stay in place, a small piece of tissue paper will help hold them in place, as shown here. 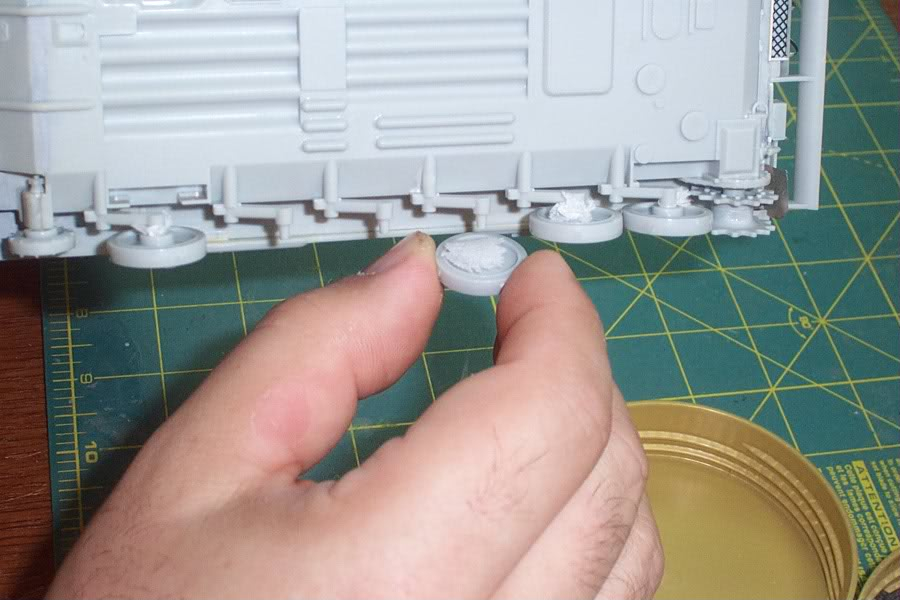 The next step involves assembling the track, working in short sections until you have the whole length done. Use a slow drying liquid cement such as Testors here, as it will afford you plenty of working time. 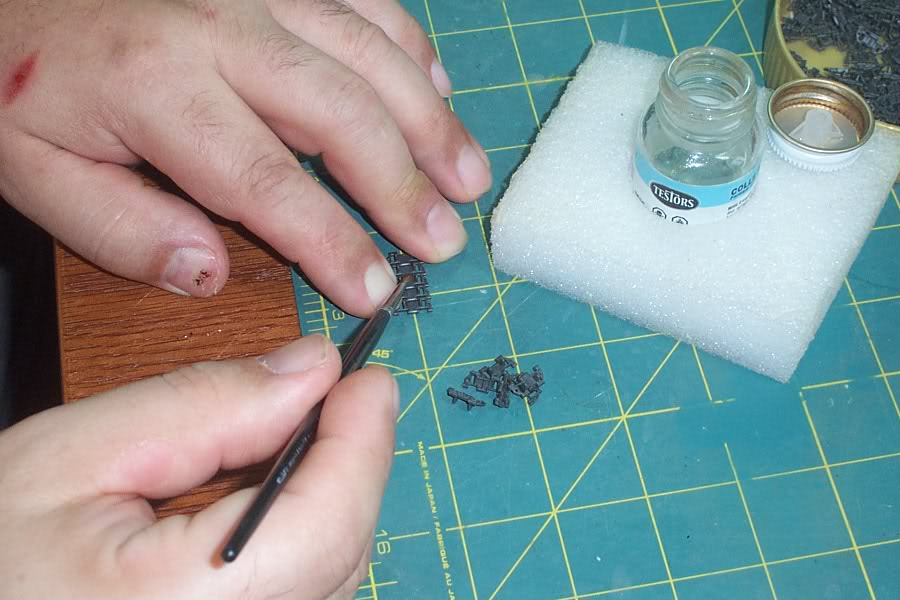 It is fairly imperative to keep your track run as straight as possible. Make yourself a jig out of K&S metal profiles or basswood or use any available straight edge as I have done here with the edge of My cutting board. 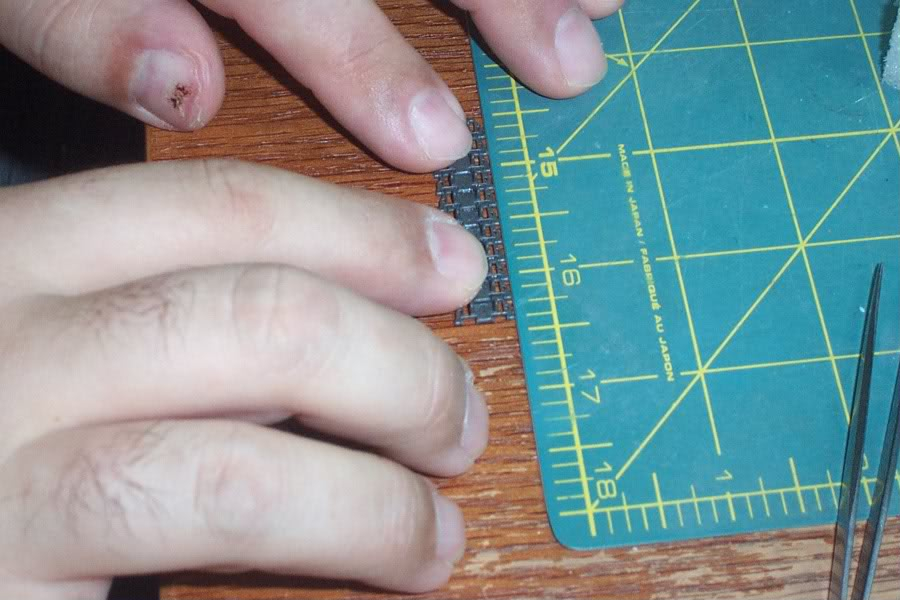 Okay, now your whole run is built, you gave it about ten minutes for the solvent to weld the plastic sufficiently while still allowing flexibility. Since you need to negotiate the fender/hull of your vehicle, it is best to apply the sprocket to the tracks rather than the reverse. 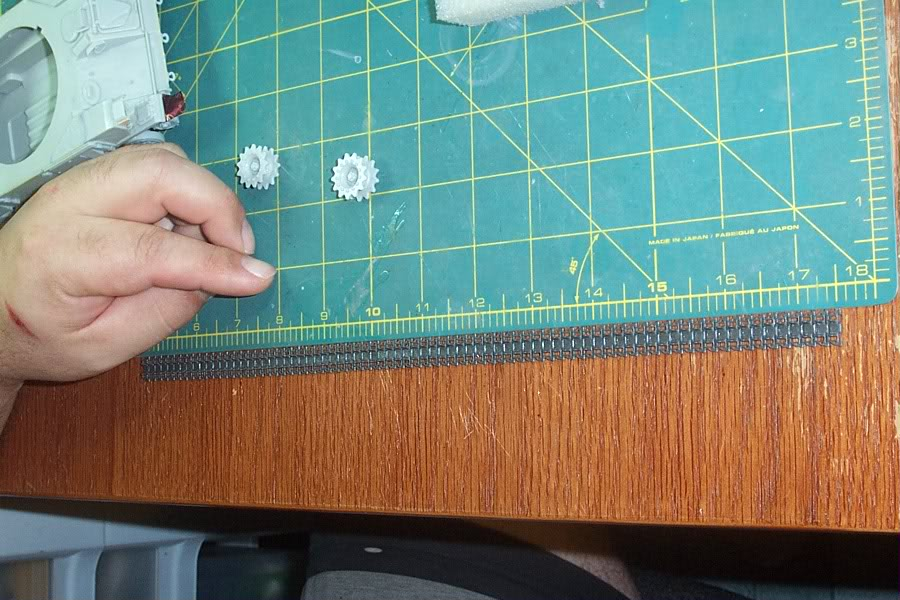 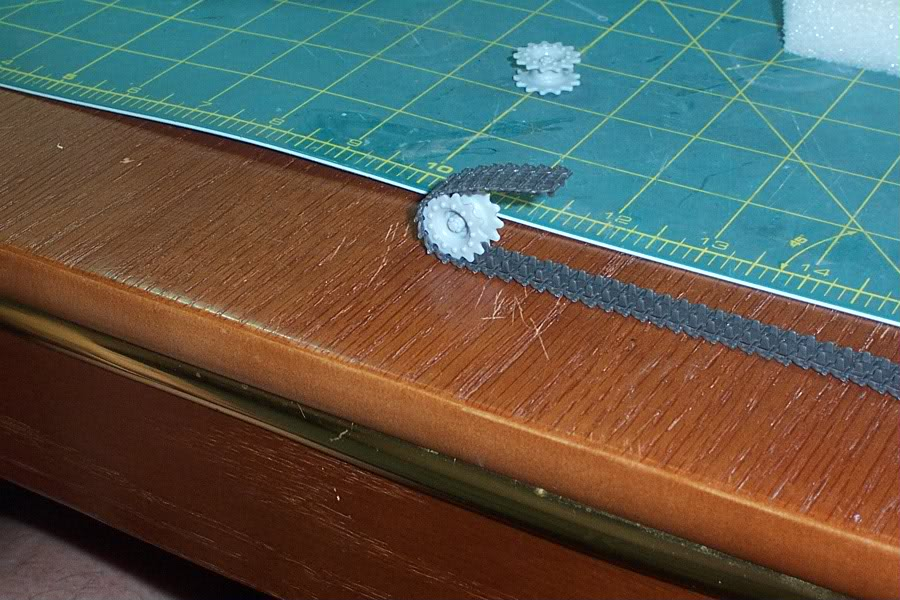 Now come the most fiddly step. Slip the sprocket onto its axle and bring the track run in place. This done glue the bottom of the wheels into the lower track run. Here I recommend the use of a fast solvent such as Tamyia's Xtra Thin or Tenax7R, then bring the forward section of track over the idler and back toward its other end. Glue the ends together 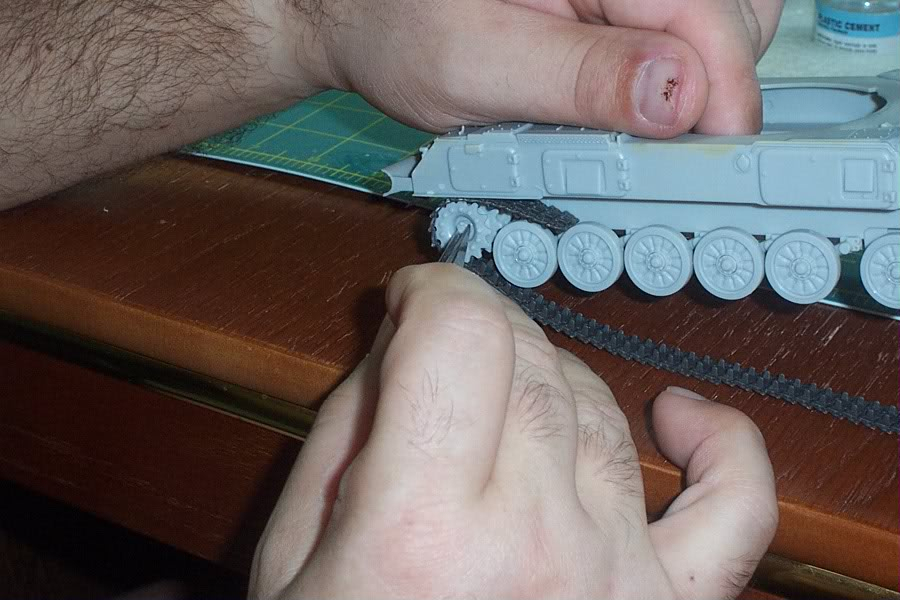 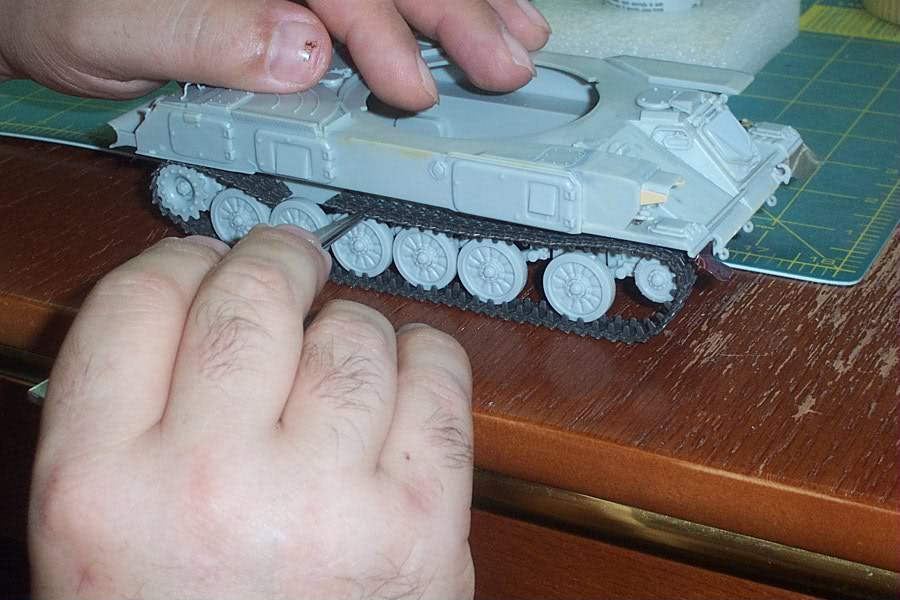 Next, induce whatever amount of sag you planned for when you counted out your links. The simplest way to do this is with the back of the handle of your glue brush. 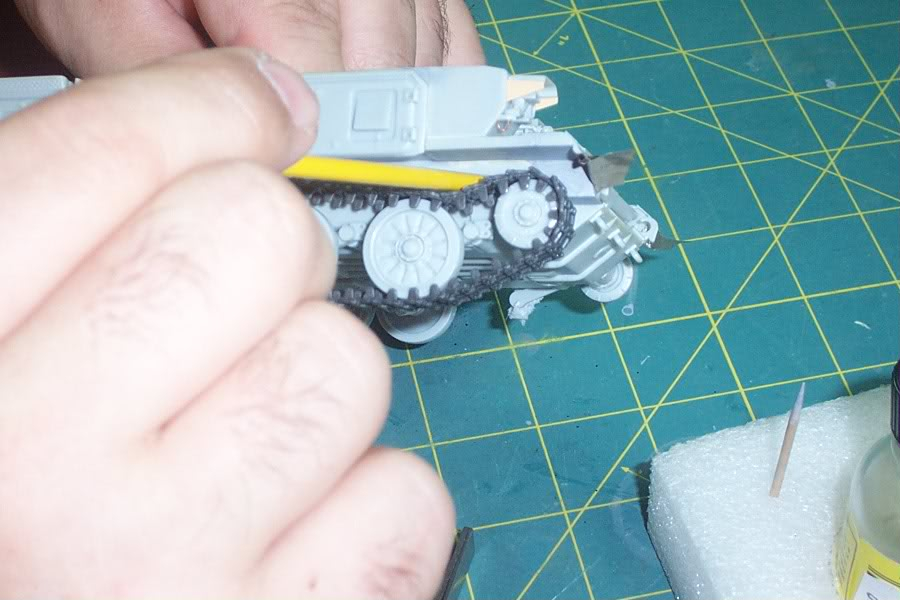 Once again using the fast acting solvent, glue the track run to the top of each wheel as you go. 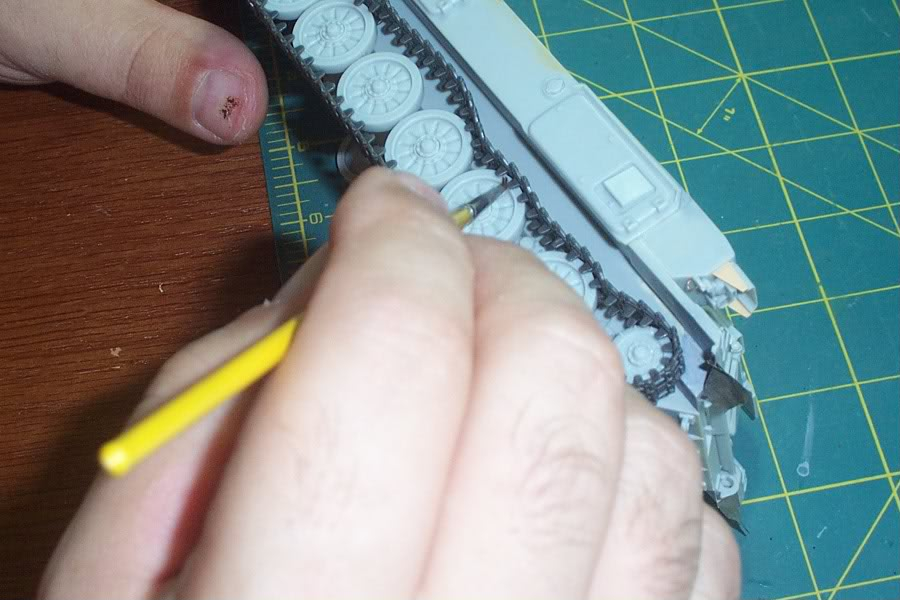 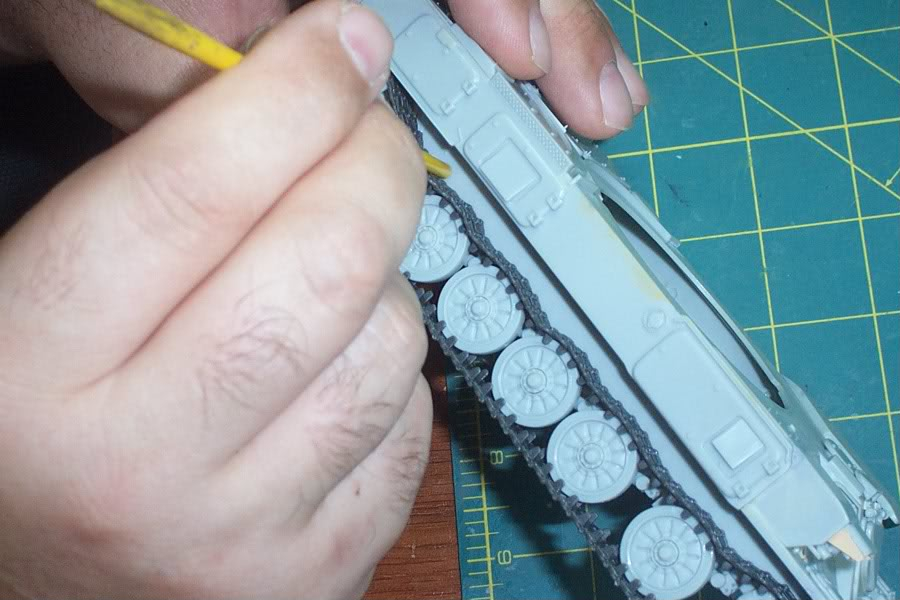 You are now basically done. Tweak the adjustment of your sag if needed and let this set overnight or at least 12 hours. 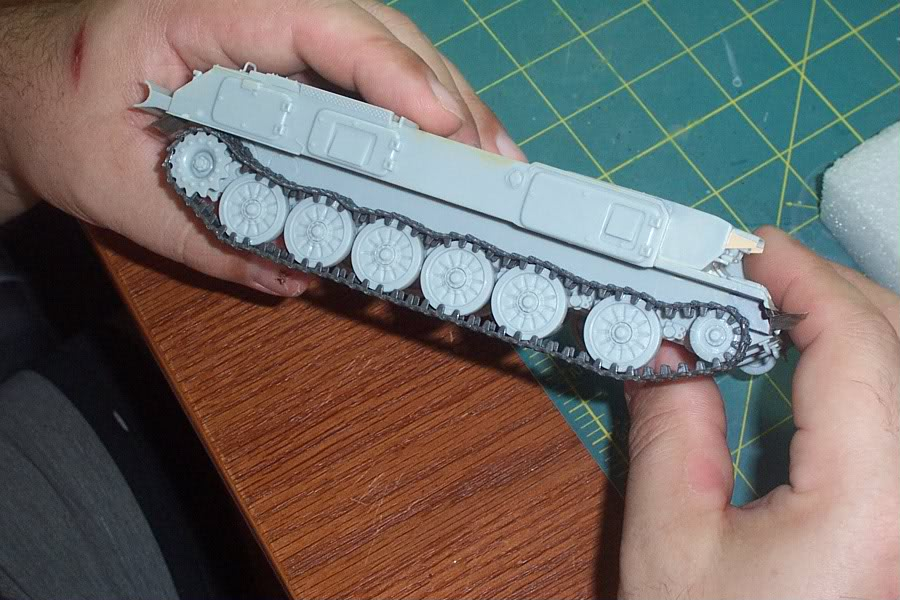 Twelve hours later, remove your assembled track run. You may need to pry it gently off the axles, using the handle of a brush or some fat angled tweezers as I did here. 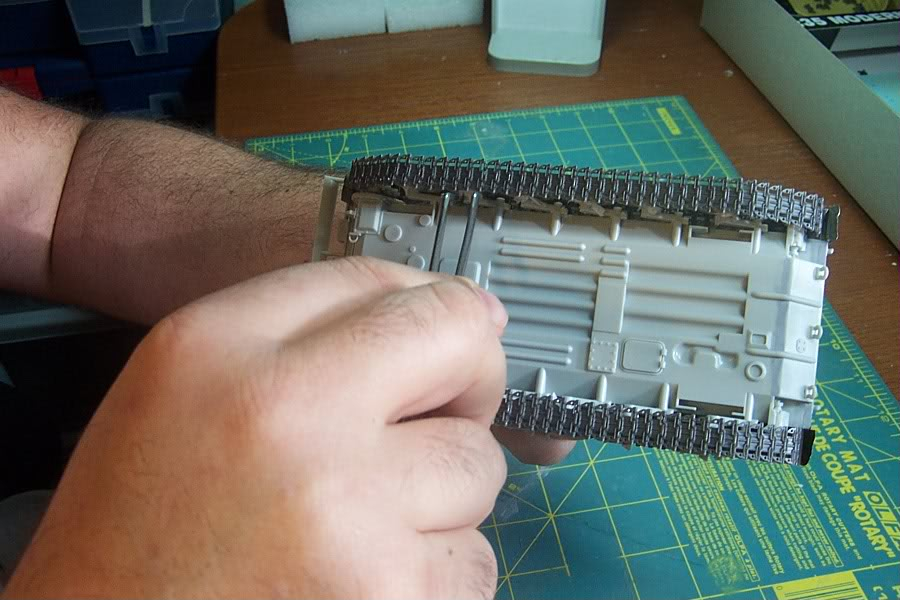 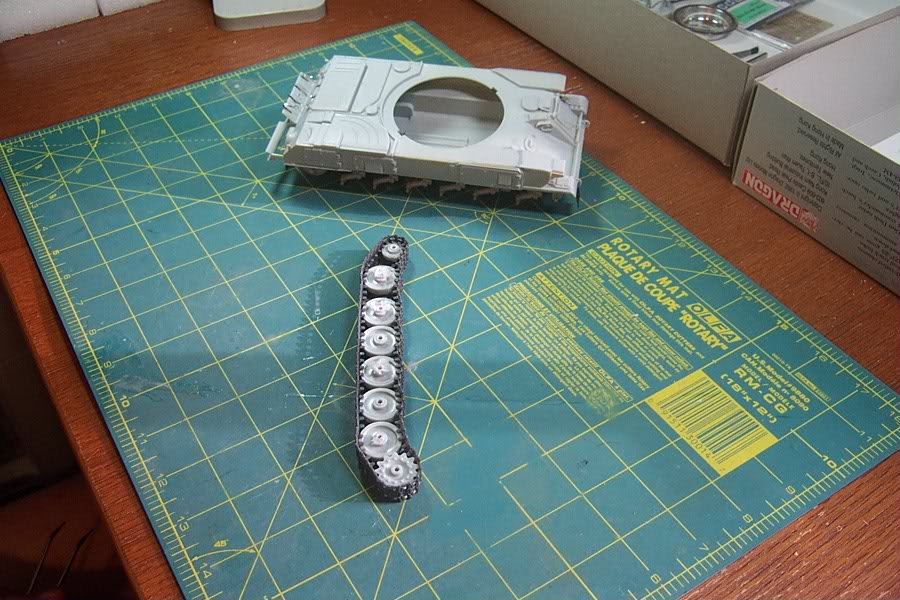 Now remove your tissue "shims" and glue the backside of the run to the wheels (for insurance) with fast acting solvent. 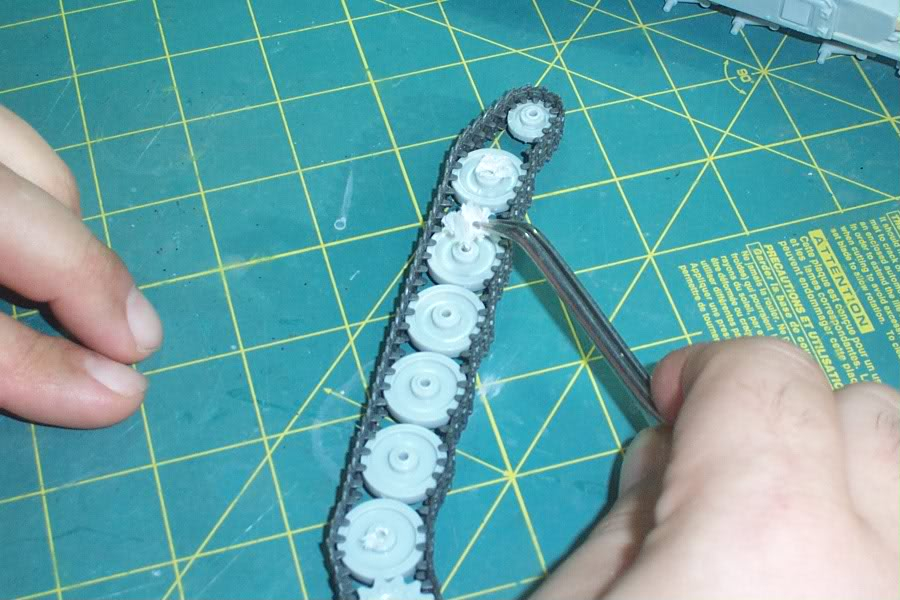 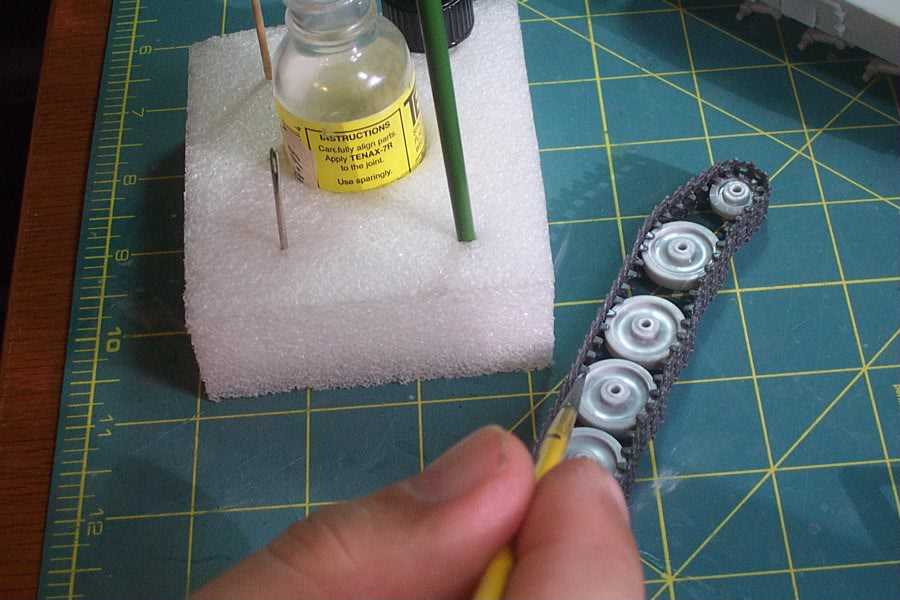 Now you're done. Put the whole run back on the vehicle and let it set another ten to twelve hours. For the next week or two as the solvent outgasses it is best that your store the track run onto its axles, lest shrinkage make it suddenly too tight to fit back on.

I know, this is what happened to me the first time I tried this idea out.

When comes time to paint you can remove and reinstall the running gear and tracks at will, until you are satisfied your paintjob is done and you fix it in place. Before anyone says this sounds like a lot of work, let me say this. It's a lot more work describing it than actually doing it.

It took me less than an hour to do both runs.

I hope this helps some of you or at least make you save a few bucks to spend on another model, rather than an AM set.

I like the idea of making a base support for the glue jar and also the tissue paper to hold the wheels in!!

Will you be doing one with return rollers in the future?

Thanks for the clear SBS! Very usefull tip!

And guess what? I was able to remove the tracks from my StuH in the end after a bit of prying!

Erik, it's my pleasure. Glad to hear you managed to take your runs off.

Thanks for the great info and photo's. This should help many.
Cheers
John

If I can screw up

the courage to tackle another tank, this is the way I want to do the tracks. Great tutorial. Thanks for taking the time to post this, I has been an eye opener for me.

I know that Merkava is waiting to get me.

Hey guys, glad I can help!

Now I need to get off my duff and get part 2 and 3 done. I aiming for that to happen before the weekend is out.

I do something similar, the only difference being that I start from the top and then connect the track at the bottom. Find it easier to add or remove a link on the bottom (flat) as oppose on the curvy top run.