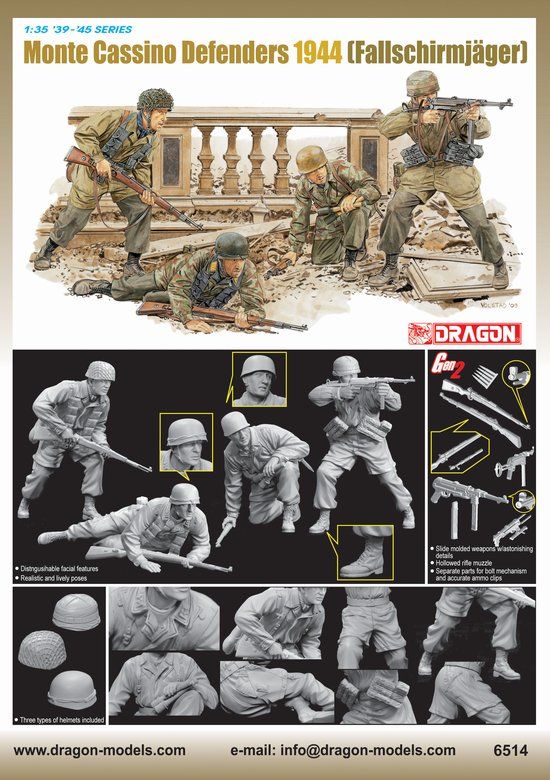 "Dragon recently released a set of four Allied soldiers fighting at Monte Cassino. This enthusiastically received set has now been joined by another 1/35 scale release, this time depicting the German side. The four plastic injected-molded figures are German paratroopers engaged in the vicious hand-to-hand fighting that characterized much of the Battle of Monte Cassino. These soldiers are wearing standard Fallschirmjager equipment and uniform items. Although they aren’t Gen2 figures, they are well armed with Gen2 weapons such as the Kar98K and MP-40. Such an array of well-defined weapons will be a boon to modelers. Molded detail is sharp and clean-cut, and the poses are very realistic. In fact, the poses have been carefully designed to fit the type of rugged terrain and rubble found at Monte Cassino. Although these four figures can easily form a vignette on their own, they would also combine smoothly with Dragon’s other Fallschirmjager defenders, namely DRA-6005 Fallschirmjager (Monte Cassino 1944) and DRA-6215 Fallschirmjager 8cm Mortar Team.
For the benefit of modelers, Dragon has strengthened the defensive line at Monte Cassino! "