Xtreme Modelling Magazine is a model magazine of the highest class , the best modellers , models , photography & paper quality . The Magazine is in landscape format with a emphasis on visual instruction in its layout , edited to the highest standards by Jose A. Azorin . 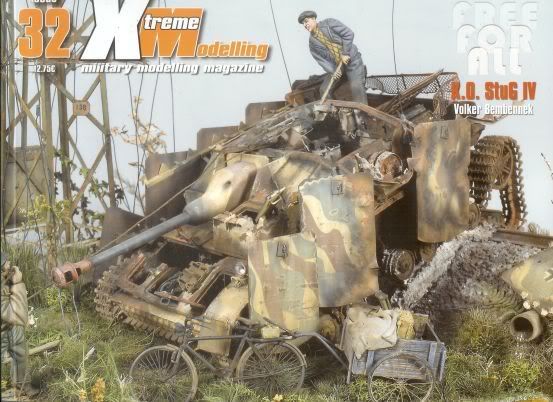 Issue 32 of Xtreme Modelling starts with the cover feature article "Free for All" a marvelous diorama from Volker Bembennek , a beautiful diorama of a K.O.'d Stug IV being stripped by two scrappers , one of those dioramas where you notice little details that at first were not noticed . A beautiful step by step of construction , painting & diorama detailing .

Luis Pitarch has an article of Humvees in Iraq , it appears no two are ever alike in terms of body , armament , armour or colours . there are loads of pictures of Humvees , internals , stowage , armaments, fixture & fitting details . If you need some inspiration on modern Humvees in service then this article is a must have .

Next up is an IDF Humvee "Memugan", a conversion of the Academy Humvee with the Legends IDF Humvee conversion by Juan G. Sevilla . A very distinctive looking conversion , fitted with IDF specific equipment its Boxy armour gives it a aggressive buisness like appearance .

"Broken Dreams" is my favourite diorama in the book , built by Jorge Jaldon is a diorama set in Londons Blitz era , a destroyed bus , victim of the german bombing sits in front of a damaged toy store , a british bobby is standing guard & diverting two potential miniature looters . The scene is inspiring , the two children have heard that the bombing has hit the toy store , they have grabbed a toy cart to load with booty only to have their dream crushed by this nasty policeman . Beautifully painted & composed , only the wheels & front guards are not scratchbuilt . The figures of the children are actually Custom Dioramics figures not Plus models , the cart is however from Part Models . A bonus is also included of a page of blitz era signs & advertisments to reproduce & use on your dioramas . Most of which appear somewhere on the diorama .

Gary Kwan builds Dragons Pz IV G with some additional details , Gary takes us through a SBS of how he painted his whitewashed paint scheme in his own unique style , then continues through detail painting & weathering , resulting in a beautifully detailed , muddy Panzer IV .

Guiseppe de Felice rounds off the book with his beautifully detailed Braille scale Mini-Submarine base , a busy port setting , the water is beautifully done , with a slight chop on the surface . The buildings are painted exquisitely , the whole scene is busy , all the figures interact together . I really love the detail & weathering on the crane .

I know that modellers will draw inspiration from all the models in this magazine , a marvelous read . I recommend Xtreme modelling to all modellers be they beginners or advanced , inspiration comes from others & these are some of the best . My thanks to Jose A. Azorin for the review copy

Just looking (okay, drooling) over that one picture makes me want to order a copy right now.

An Xcellent magazine, every issue!

I was meant to be reviewing this somewhere else oops

Looks like I wont be now.It is a great Issue and the bus dio is oustanding,but they are all good in their own ways.Recommended

Deano
Be nice to me I am new

Well Deano , it does not hurt to have a differing opinion on the same review

. If you , or anyone else wants to do some reviews that would be great !

No probs Jenny,if I get anything worth reviewing I will run it by you first:)

Deano
Be nice to me I am new