Tamiya has announced that they are going to be re-releasing their old SAS 30CWT truck with a set of seven figures. 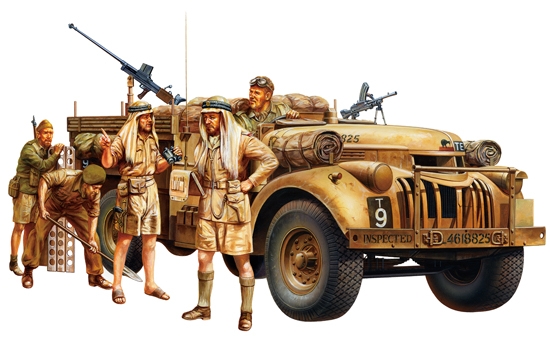 Some may complain that it is an oooooooold kit with someone elses figures in the box. But If you don't already have one of these in your stash, then it might be a good thing. And yes, that is the *Master Box* figure set that they are pairing this with. And as a side note, there are many really nice update sets for this kit. So with an update set this should be a really nice, and welcomed addition to lots of peoples want to do now pile of kits

Nooooooooooo Gary LOL , that is the Mastermabox crew Hehehehehehehe not MiniArt .

What's really nice is that there are also styrene Vickers machine guns that can be used with this model.

If anyone is building one with the Italian 20mm Breda gun, just remember the L.R.D.G. ones used belt ammo.