Looks like I'm the first to open the box and fondle the plastic.

Although I haven't actually started it yet but here's the start piccies. 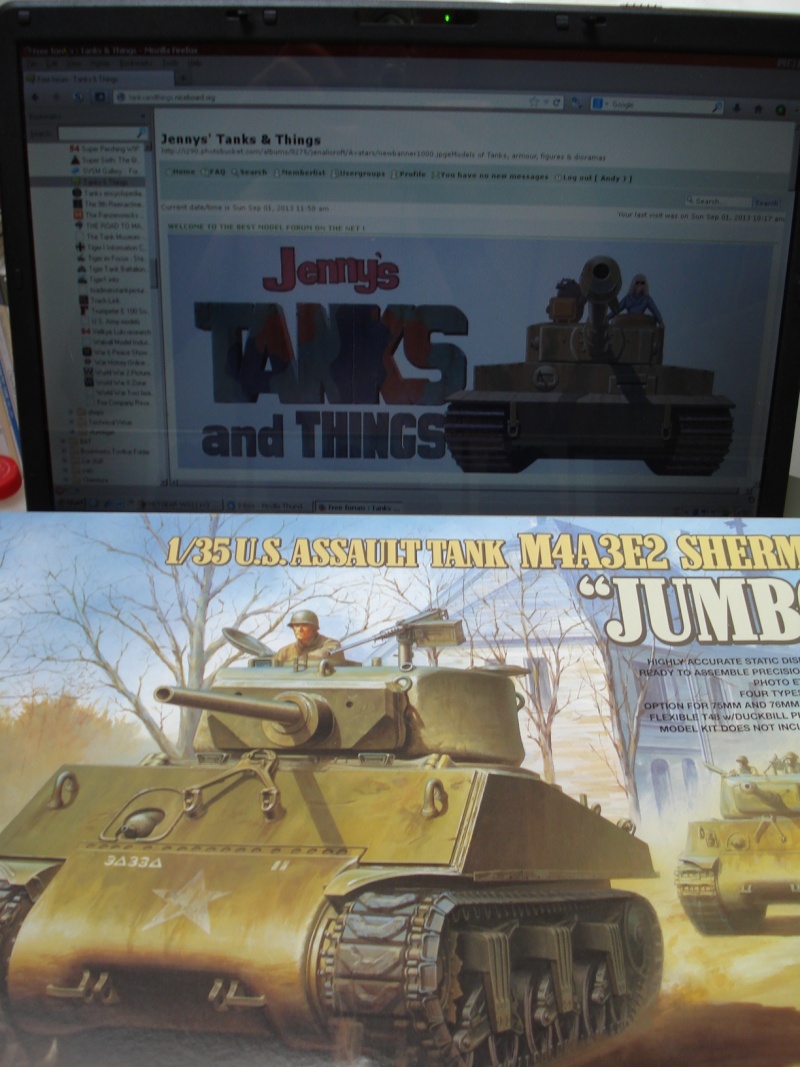 The parts including the fist of the aftermarket parts I'm using, the air-cooled .50 cal coaxial MG 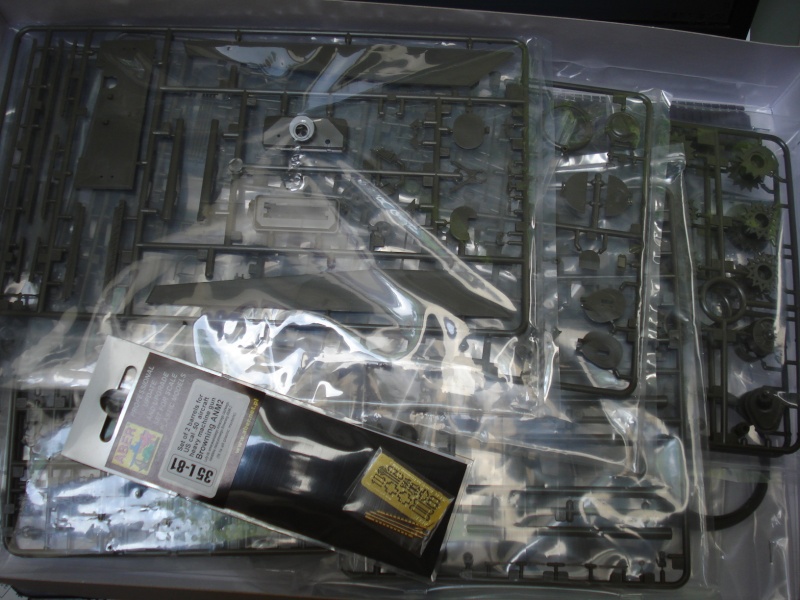 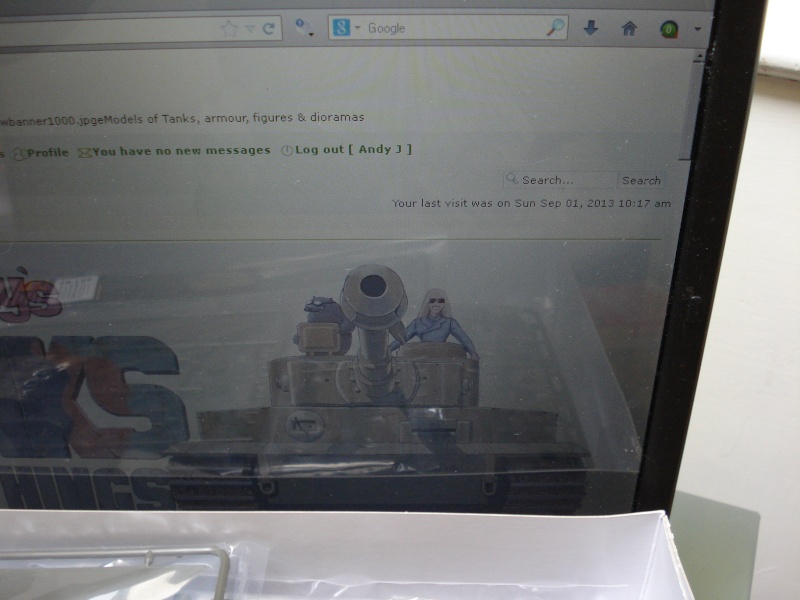 Not sure which "Jumbo" I'm going to be building yet as I haven't found the reference photo I like. However, this will be a 76 mm (M1A1) armed vehicle with the aforementioned .50 cal coaxial. Probably fitted with Somerfield matting and the usual late war (1945) accoutrements. The tracks are yet to be decided upon but I will be replacing the kit tracks with something from Panda Plastics. Jumbos were usually fitted with T48s but there are photos of them in T51s and occasionally T54E1s. Irrespective of which track there will be EECs.

This'll be interesting as I really want this kit. I didn't think the E2s had the co-ax .50cal, certainly Bradley wanted them on the E8s but I've never seen them on a Jumbo.

This'll be interesting as I really want this kit. I didn't think the E2s had the co-ax .50cal, certainly Bradley wanted them on the E8s but I've never seen them on a Jumbo.

I've definitely seen photos with the .50 cal, I just don't seem to have any to hand at the moment

A lot (most?) of the E2s that were upgunned with the 76 mm received the .50 cal at the same time as the extra work involved wasn't much when compared with swapping out main armament. I'll be spending the next week or so digging out reference photos before I actually start this build. I also have a couple of StuIGs to finish...

Also, as I have two barrels in that Aber set one of my E8s is going to receive the other at some point in the future.*

Quick search has found two photos of the same vehicle that Tasca used as basis of their box artwork, yet they omitted the .50 cal.

And on the move. Guess it's T48s I'll be needing but at least the kit will have the decals I need. 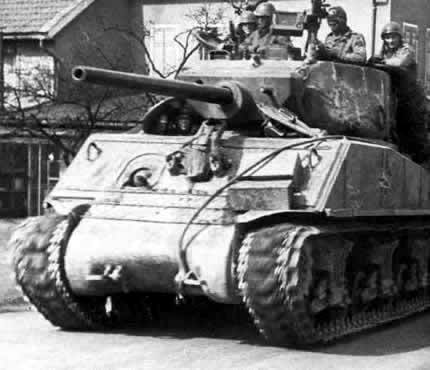 And a discussion on ML, that I contributed to as well. Funny how such things slip the mind.

I'm sure suitable evidence will come to light Andy.

Wow! Two super cool Tasca kits. This is going to be fun indeed.

It sure does Simon 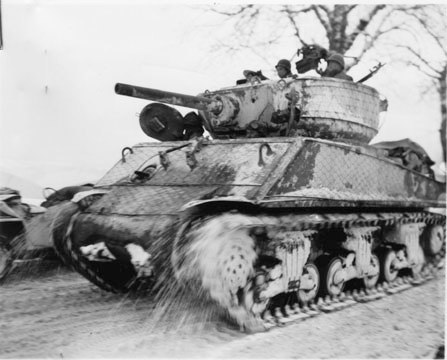 The two photos I posted up earlier show the MG muzzle as external to the mantlet, the sure sign that it's fitted with a .50 cal. It's likely more noticeable with an E8 as they don't have the extra 3.5" armour.

Indeed, all the 4AD E8s had the .50cal projecting several inches beyond the rotor shield.

Got to a stage where I can post up photographs!

I've been building this in the order given in the instructions, which like most tank kits, starts off with the road wheels and suspension. The suspension is a bit fiddly, what with the flexible rubber pads for the springing, but well worth it for the realistic articulation that this imparts. Especially so with this subject as the E2s were somewhat overweight and nose-heavy. However when constructed, the bogies all look the same so it's a really good idea to mark them up. I used a black marker to write the letter F for front, on the two forward bogies. 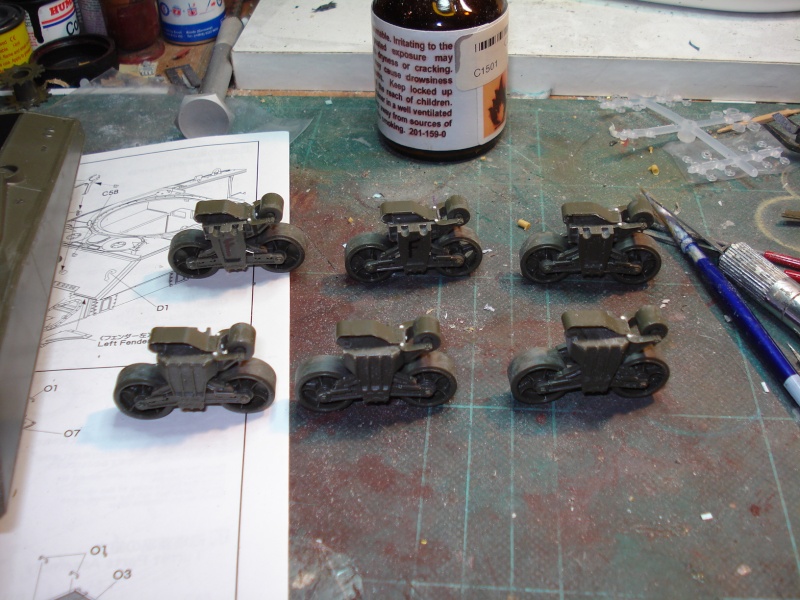 Comparing the bogies with the photos and the very excellent engineering diagrams in Son of Sherman it was apparent that Tasca did miss some bolt details. However being suitably equipped with a Historex punch set it was a short job to make some. Next will be to drill out the holes in the corresponding locations, but that will have to wait until the drill bits arrive in the post. You will also notice that I have used the kit parts for the skids, they're actually pretty good although they need a good clean up and some thinning out. 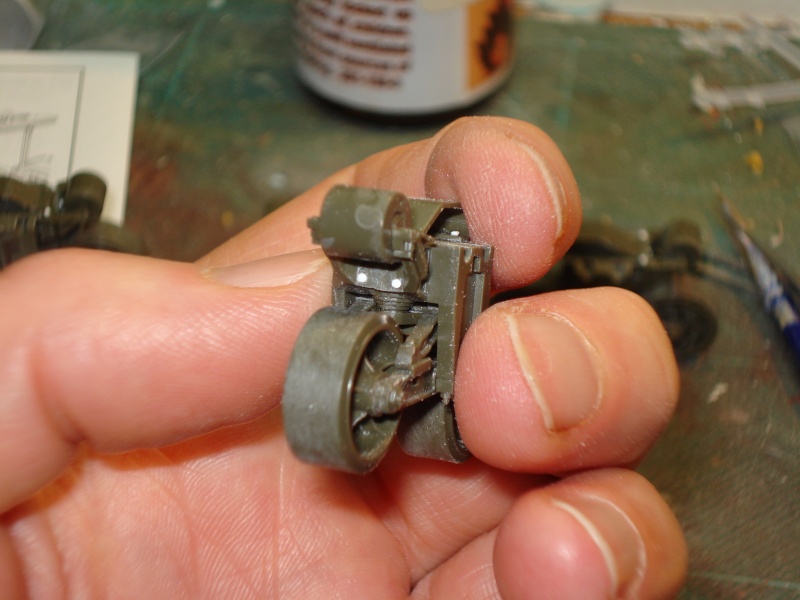 The next steps was to construct the details, the FDA and the upper hull. These all went together very easily, the only issue being the ambiguity on parts B13 or B14 to use. Tasca thoughtfully provided all the parts to depict the tank with the FDA removed for work on the transmission, but they don't indicate this on the instructions. So far this has been their only DML moment. Everything else is very Japanese in precision, with parts poke-yoked for fit and location. Toyota would be honoured by this adherence to their principles. 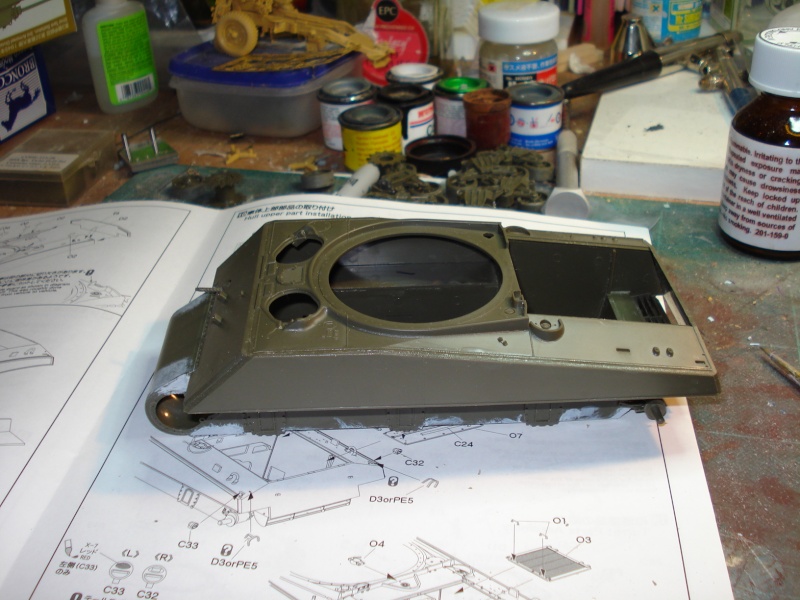 Some Mr Surfacer is needed to recreate the cast texture that gets removed during clean up, but otherwise the filler has remained in the drawer. Might need to use a little bit just to tidy up the welds on the additional armour panels though. 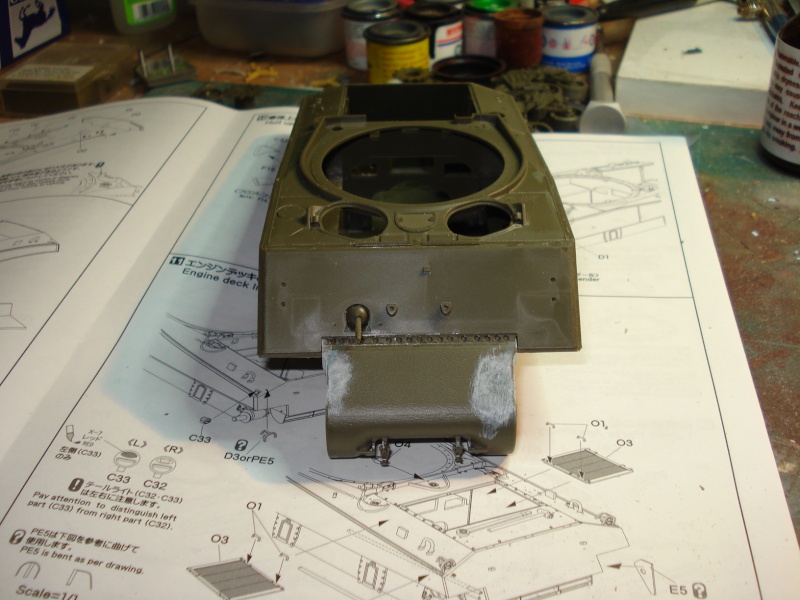 The exhaust deflector is fiddly, but looks perfect when built. It even moves! 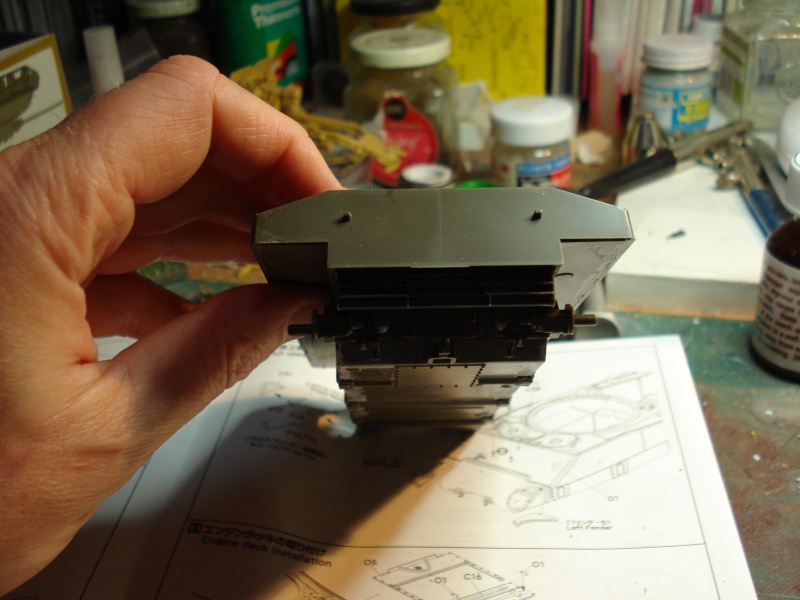 Two fundamental references that have been on my desk since before this build was started. The Tasca kits are superb, but they missed some things, however with Hunnicutt and Son of Sherman as guides it's fairly easy to spot which parts need to be modified, added or moved. 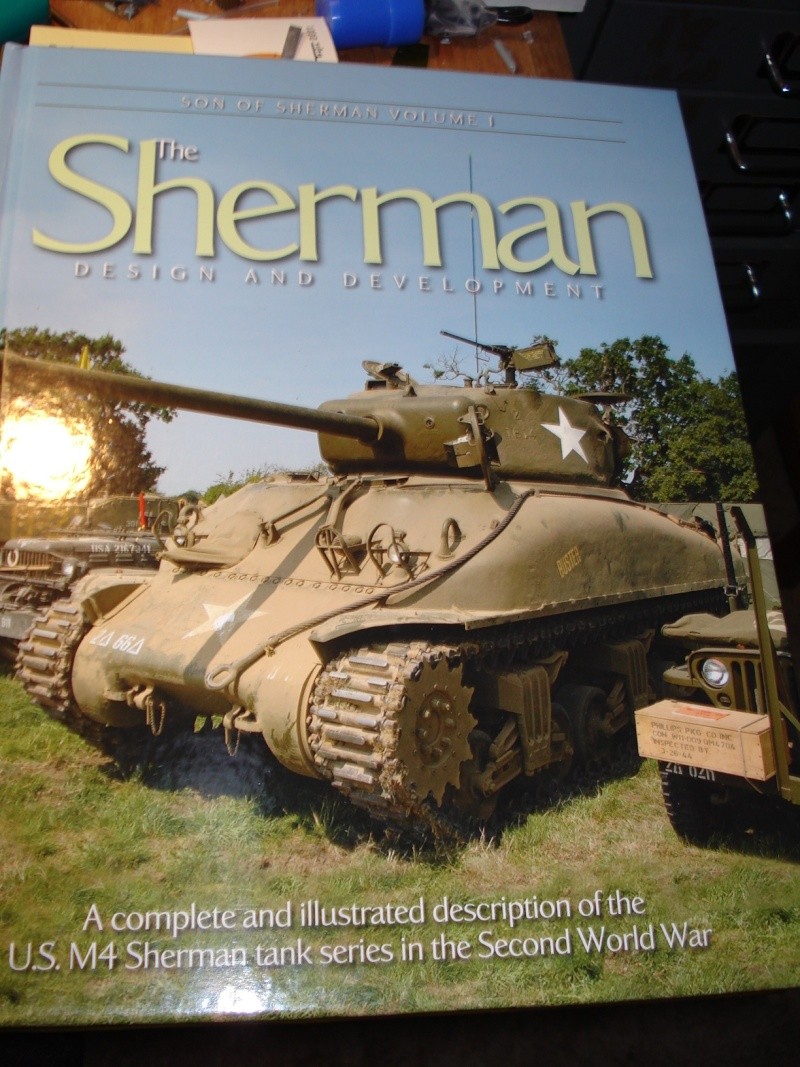 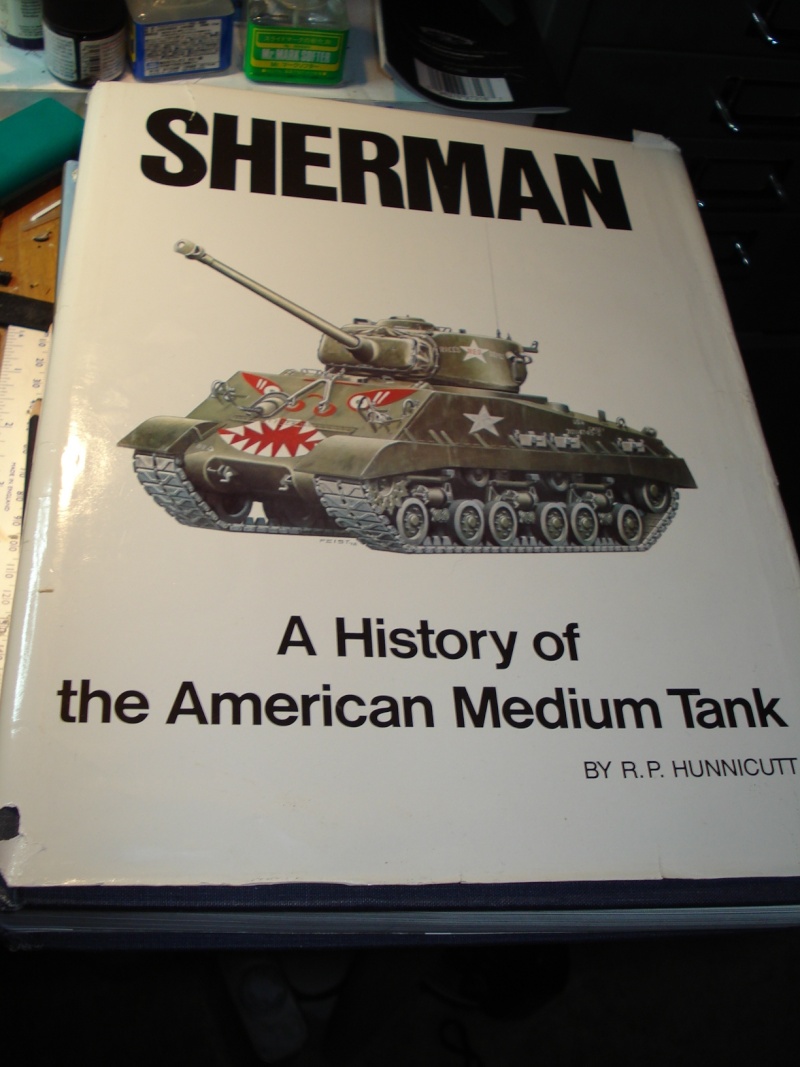 Making steady progress with the old E2. It goes together like a Tamiya kit, in fact probably better than Tamiya...

Upper hull is now mated to the lower hull and the turret shell is together. There will be some filing necessary on the turret as there is a mould seam that needs to be removed. It was inevitable that this one would be there due to the limitations of injection moulding. A little bit of Mr Surfacer will soon replace the lost casting surface effect. I'm still waiting for the aluminium barrel to arrive in the post so thought I would use the kit barrel to see how it all looks. One issue to note with this kit and probably other Tasca Shermans is that the poly caps used to hold the gun trunnions aren't really up to the job with the styrene barrel, with the weight of the aluminium barrel this will be a real problem. I also need to figure out a way to mount the coaxial .50 cal as of course Tasca don't give any help on that. 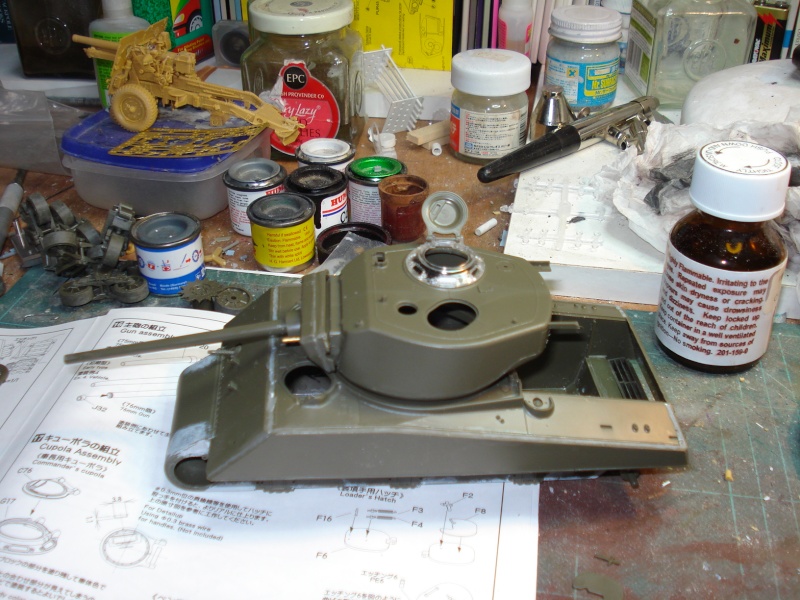 I have also made a jig for the bolt holes seen on the suspension bogies, simply a bit of styrene strip with four pre-drilled holes. It's then just case of lining it up on two perpendicular edges and drilling out the four holes. Photo of results to follow.

It's a nice build John, the only limitation is the lack of time on my part not the kit or the instructions. This is my first foray into the world of Tasca Shermans and so far I'm very impressed, any scratchbuilding and additions are to be honest pretty much elective. No having to rework entire areas of the kit to correct obvious horrors or instructions so so complex and baffling that they cause sleepless nights. Time and space permitting, I may well construct two E8s in parallel, one Tasca and one DML and blog the results.

Rather than using brass I've been using the kit parts and going old-school on them by thinning them out and adding details. The front fenders as supplied in the kit are horribly thick, but as they're in two parts it's relatively easy to thin them out 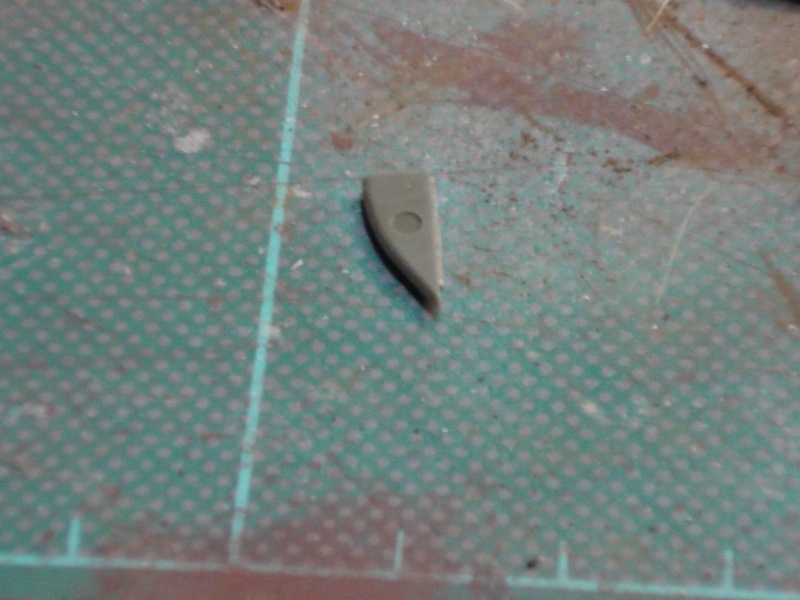 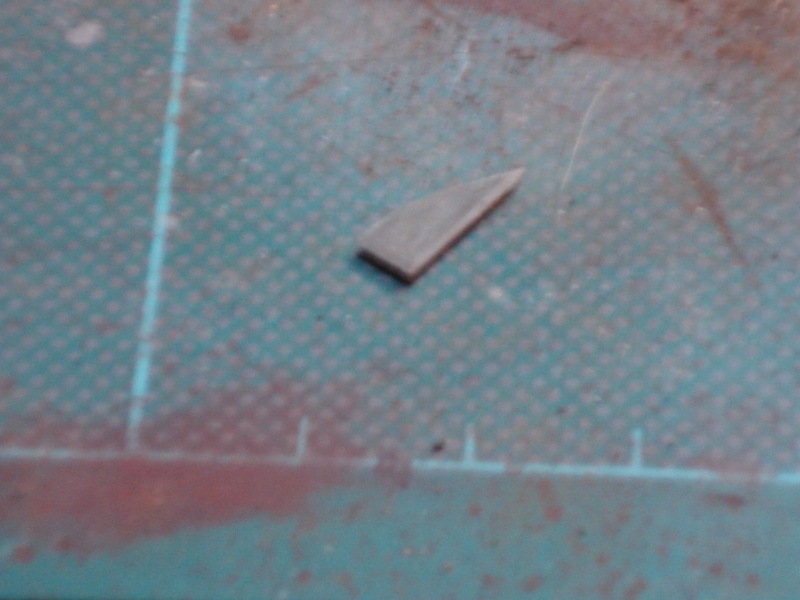 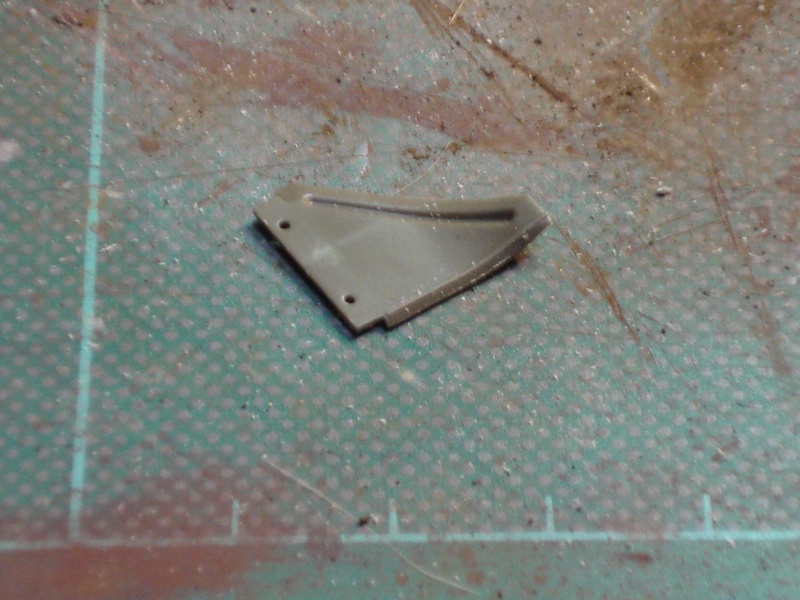 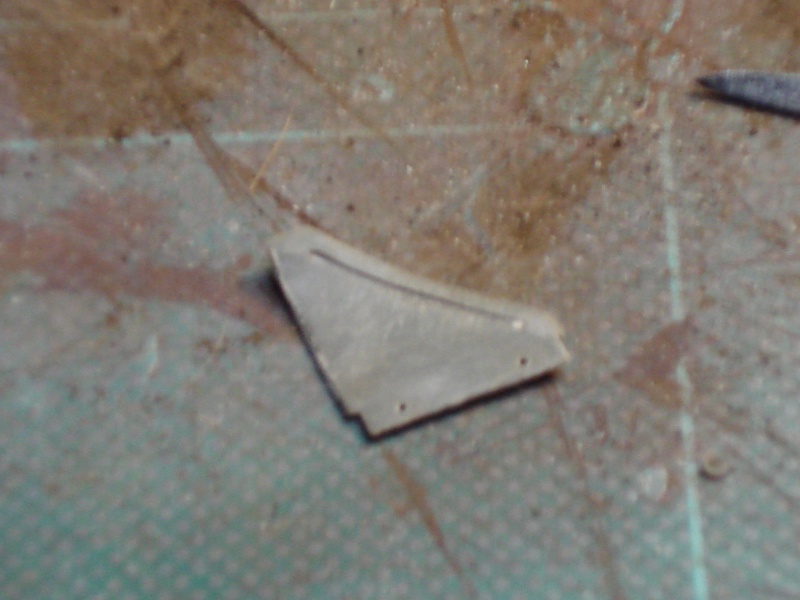 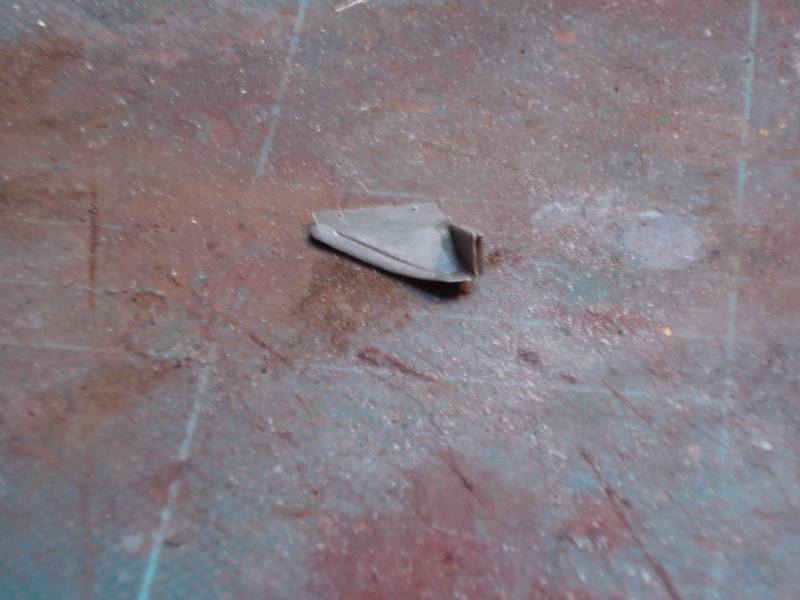 Overall progress so far. The bogies are held on with blu-tac. 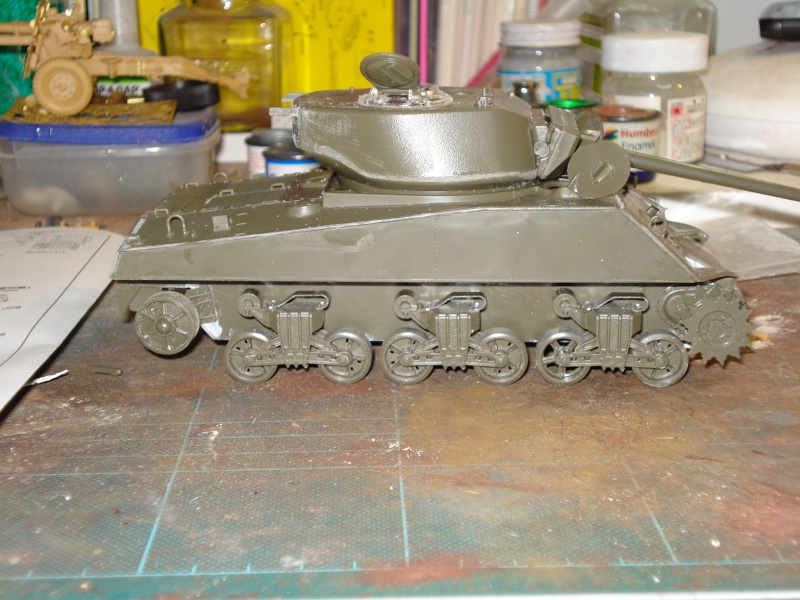 I'm really going to have to sort out the main gun trunnions as they can't even support the kit barrel, let alone the Aber replacement that is on order. 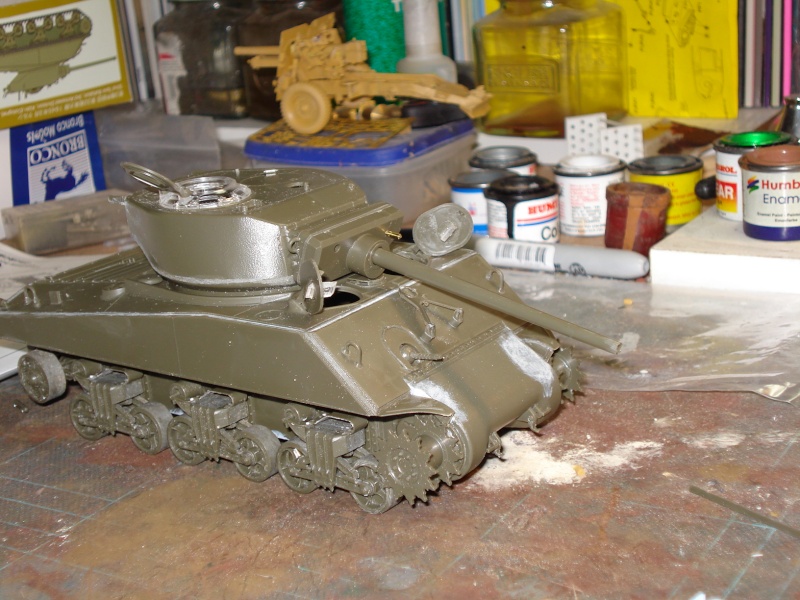 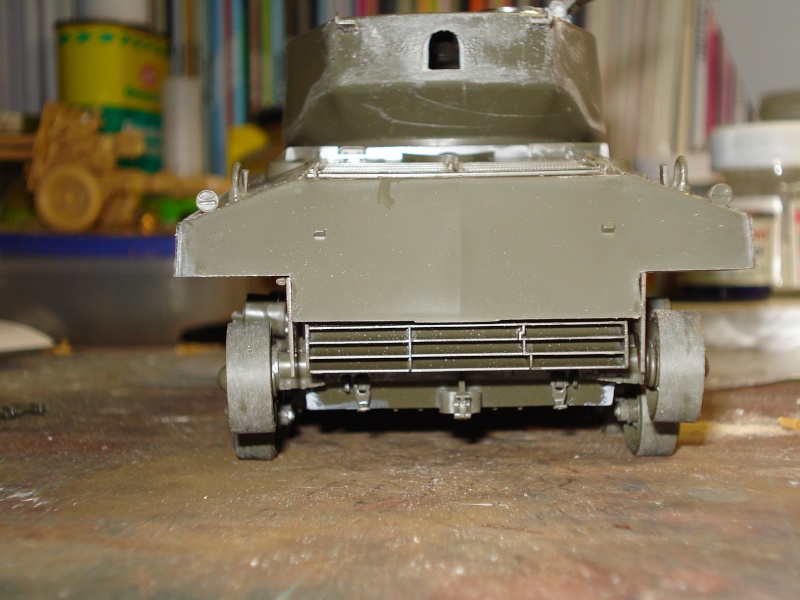 Decided that this one is going to have some GIs on the back and crew in the hatches.

Managed to score a set of these figures 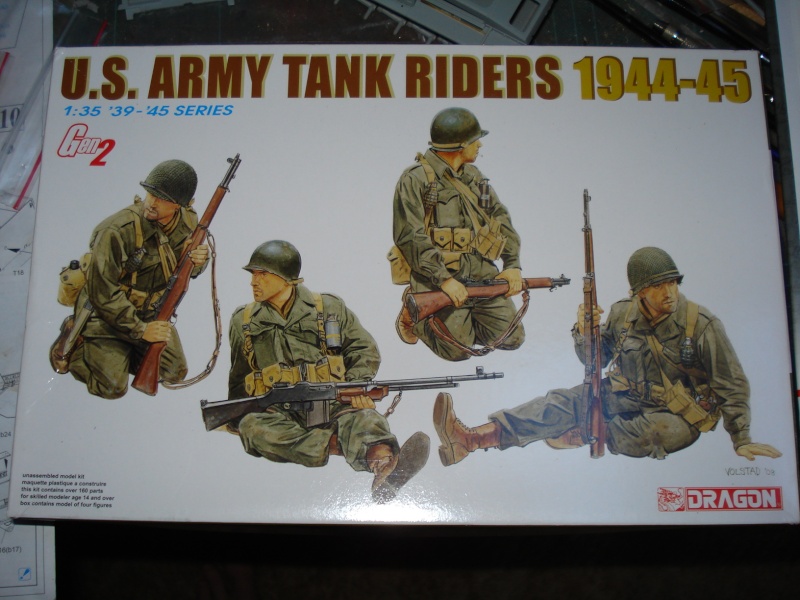 A couple of these look like they'll be perfect. 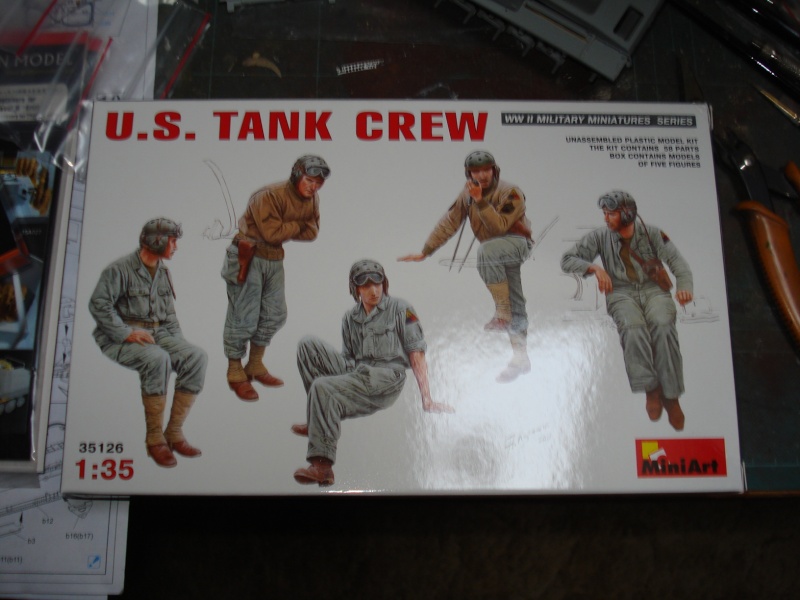 Nice choice of figures Andy, should suit the Jumbo well.

The sequence of photos that Tasca used as a box-art reference/inspiration show the E2 covered in GIs and stowage with the crew preparing to move off. I was very lucky to get the tank riders as I think this set is no longer available.

Andy.
You are off to a great build with that Jumbo.