I was wondering out loud today on facebook about the origin of Dragons "new" orange box Tiger I. Mostly wondering where it came from, as I don't recall anything coming from them that would suit this model and year, except from a true Cyber Hobby white box kit. And then someone that knows a LOOOOOOOOOT more about such things told me that she thinks it will be the Italeria Tiger I with a DML gun, machine gun, and DS plastic tracks thrown in the box. After all, they did this same thing with the LVT. And I am leaning towards agreeing with Jenny on this. And I am not going to spend any of my money on this until someone can actually crack the box open, and tell us all the real news about this kit. 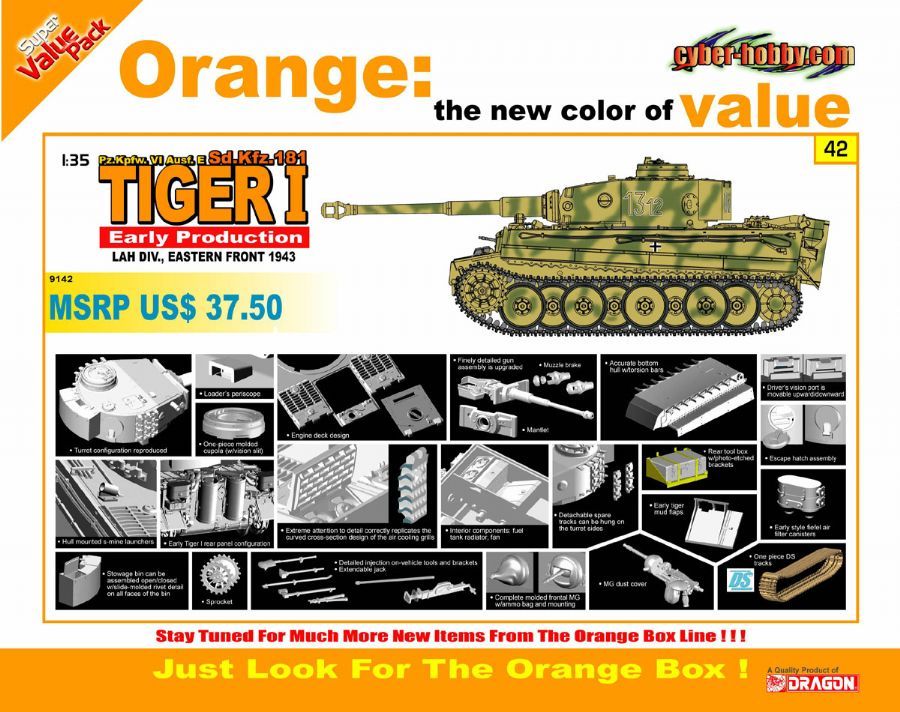 Waiting patiently now, not so excited.

Just what the world needs, another Tiger kit.

According to some very knowledgeable people who consult for DML, this is the Wittmann Cyber Hobby kit. Might now buy this one seeing as it's no longer associated with that name.
missing lynx discussion

Sorry Andy , I think you will be buying a Italeri tiger

Italeri sprue shots here, these are vastly different to the CAD images from DML. No way is the Orange hobby release the Italeri kit, the latter has an engine pod and no radiators with a complete engine deck, where as the Orange Hobby has radiators, but no engine and the engine deck is made up from separate parts. Really can't see Dragon retooling the Italeri kit to make these changes when they have a perfectly good set of moulds to use. Similarly for the torsion bars, IIRC the Italeri didn't have any at all, and I think what we're seeing with the Orange Hobby CAD is that the kit has them, not if they're moulded in place or not (can't tell that from a CAD), again however, to include torsion bars on the Italeri would be a huge investment in tooling.

Also, and this is the real reason it's likely to be DML, the Italeri Tiger E/H1 will make a nice DAK or early east front Tiger, but not a Kursk Tiger.

p.s. I had to use the sprue shots for the hybrid as there aren't any for the early Tiger.

From the pics and information released at the Nuremberg Toy Fair on this Tiger I, it seems it is not a straight re-release of the white box Wittmann Tiger I. Though it has the majority of the parts, it includes a simplified hull and running gear

Andrew C
Be nice to me I am new

From what I've read the hull and wheels are from the pre-made Dragon Armor series. Means that the swing arms are moulded in place, whilst the wheels are slightly simplified and with the exception of the outer set, are joined together. Apart from that it's the Wittmann kit minus some PE parts.
The simplification of the wheels is limited to some minor welds omitted (welds are easily replaced) and the tyres aren't branded; the Werkstat Ko. obviously used non-OEM retreads

The linking strips for the wheels will easily succumb to cutting and sanding, so no different to SOP there either.
With a little bit of modelling as opposed to just assembling this will likely make a nice Kursk Tiger and all without paying stupid money on ebay and without adding to the Wittmann cult.