. This figure has been out for awhile but It needed a review and Laura's planned build made this as good a time as any. The figure is an Early war tanker as stated it says Polish Campaign, but you could use him in on any of the early battle fields in Europe. That said put on the Panzerlied March and Blitz across Europe as we review this figure.

The figure comes in a nice box. Its a big box considering the size of the figure. The figure is 1/35th scale. 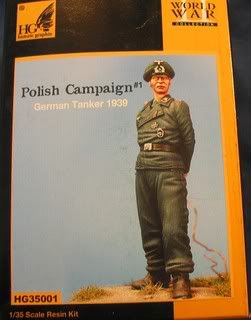 The figure is cast is a yellowish resin about the color of Tamiya plastic. The kit includes the upper and lower torso, boots, arms and head. 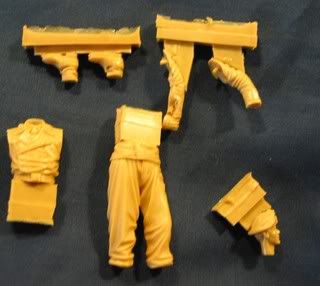 The casting is clean with the usual carriers to remove. There is a slight seam on the arms but nothing a little # 11 knife and scotch brite pad won't remove. The figure has a good facial expression. I wish my camera was better and my skills

but I hope this gives you an idea. He dosen't look happy. 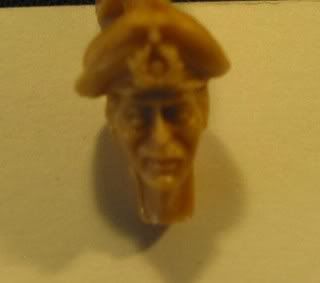 The fit of the torso was good. I also went ahead and tested new arms from the Tamiya Pz II which were a good fit. And a set that would allow are tanker to hold a set of binoculars. So you can put him in your early war panzer. With a little work. 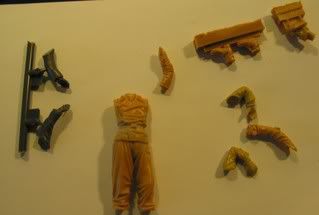 There are no painting instructions but the box art is nicely done.

I know there are a few ladies on this site that like the early war panzers and yes a couple of you guys too so I hope this review will fit right in with Laura's group build and a few Panzers out there. The figure was purchased by myself from Squardon.

HG is this a new company?

HG is this a new company?
Panzer

Not new and I hear it gone

Chris,
Sorry for the late reply. Been really busy. I've had this figure for about a year or so. But have heard that they are now gone. They did this figure and a few Polish figures. I'll see if I can find out if their still around. Brock

It´s a pity that such producers do not find the way to Germany...