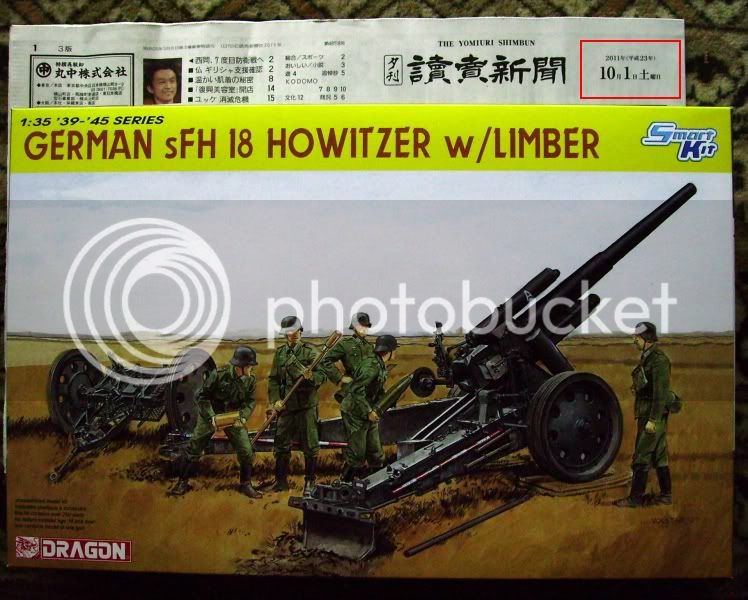 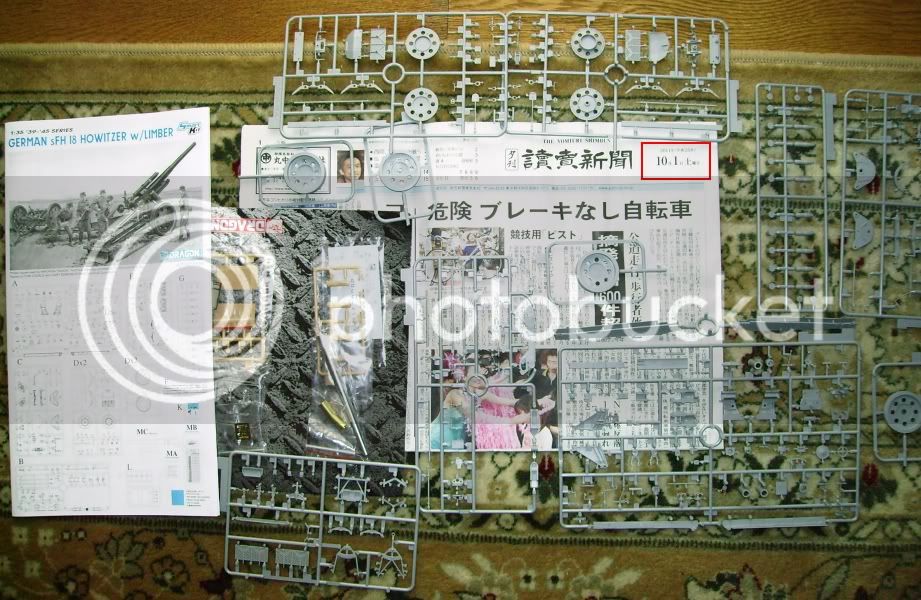 Heres the sFH18 with the date. Dont know if anyone here can read Japanese (all the English papers were gone this morn) but the date is in the red box. Havent yet decided if Im going to make it German, Finnish, or even Chinese, but itll be deployed, not towed, and crewed though theyll be coming out of the stash. I wont be starting this just yet though, the SPG first... 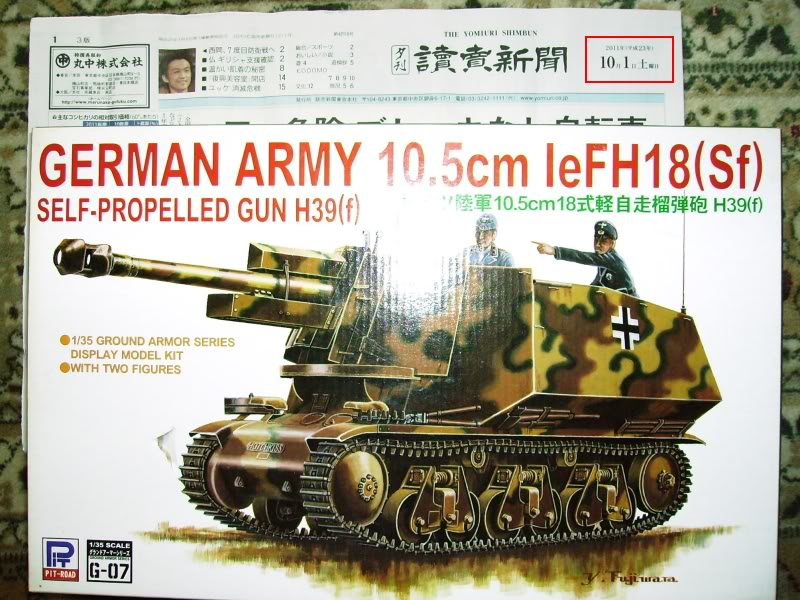 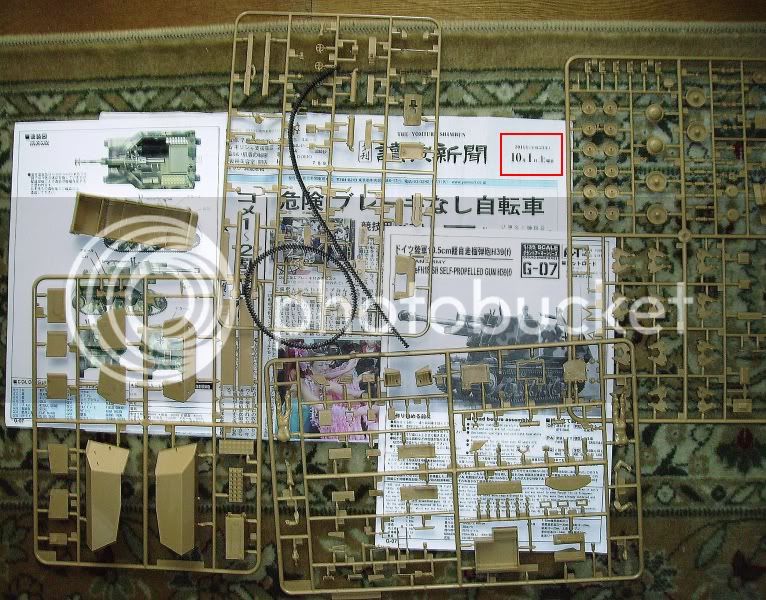 I was contemplating replacing the tracks but decided theyd most likely be small and fiddly and I want to get going on this one, hopefully from tomorrow time allowing. Any extra detailing will be from the spares box and scratched. Ill ditch the crew figures though, theyre fairly naff. Ill replace them with some from the stash too. Planning to do it in this cam scheme 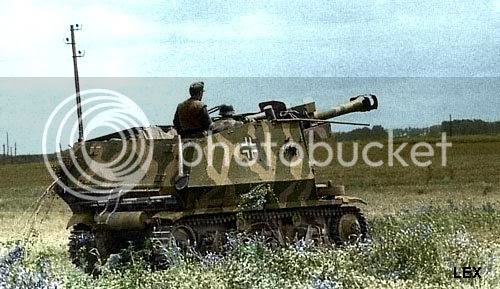 So, fingers crossed Ill be starting on the morrow. Not tonight, having a quiet birthday drink, and thats not good for modelling

That's some nice arty Birthday Boy, you should have fun with this.

Yeah, as I say, time permitting I hope to get started on the SPG today (which BTW I got at a bargain 50% off at the LHS some time ago). But I have to get the domestic necessities outa the way first. And if I actually manage to finish even one of these, Ill give myself a damn good pat on the back.

Nice! There's some interesting kits in this Group Build, looking forward to it.

Sad to say I havent been able to start yet. Weve been busy at work getting ready for the schools sports day (which was today), and my missus hasnt been in the best of conditions so Ive been entirely knackered. However tomorrows a day off, and from this Friday Im on two weeks annual hols so SHOULD be able to get started very soon. "Work is the curse of the modelling man"...to paraphrase a paraphrase.

I have read a personal account from one of the commanders of one of these SP guns , it was in a book called "Overlord" and they were deployed on a hillside behind Caen and were very effective in holding the allied forces from capturing the town despite being attacked by air hourly ! 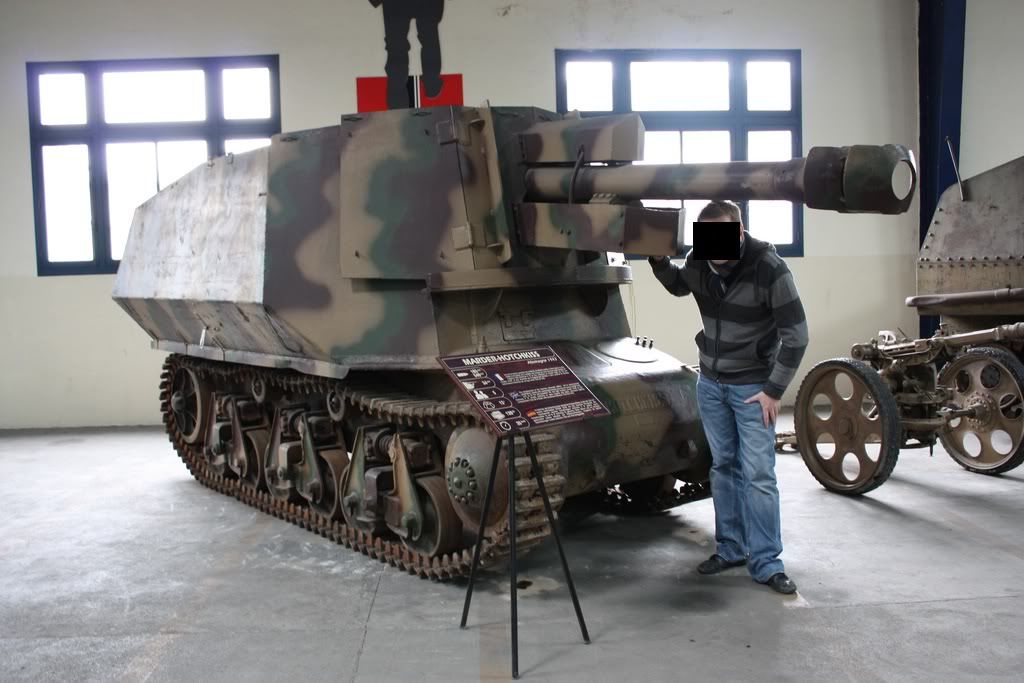 ...and Im thinking my crew members may be wearing these improvised camo vests too...maybe. 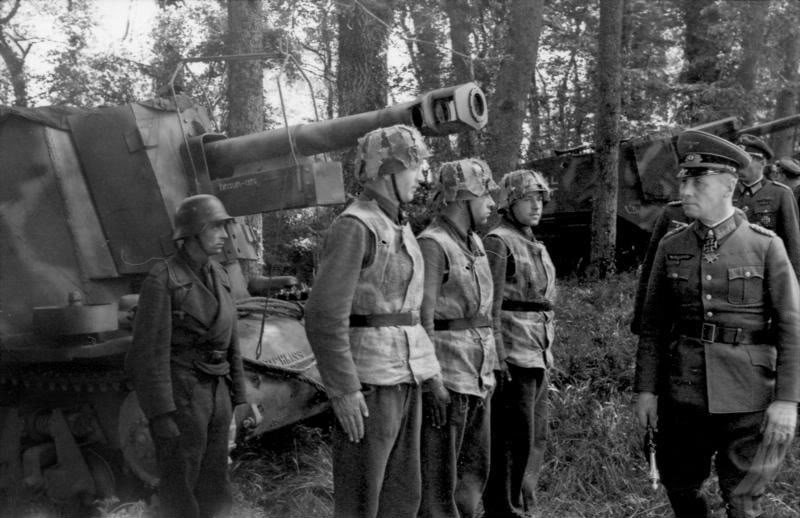 Well despite being on holiday domestic duites got in the way until today when I was finally able to start on the Hotchkiss 105. I only have limited photo refs so far, have to look for a walkaround tonight in the hope of checking some things that dont seem quite right, or are unclear in the pix I have. Using MkI eyeball it seems to me the glacis plate on the model is too horizontal compared to the real thing 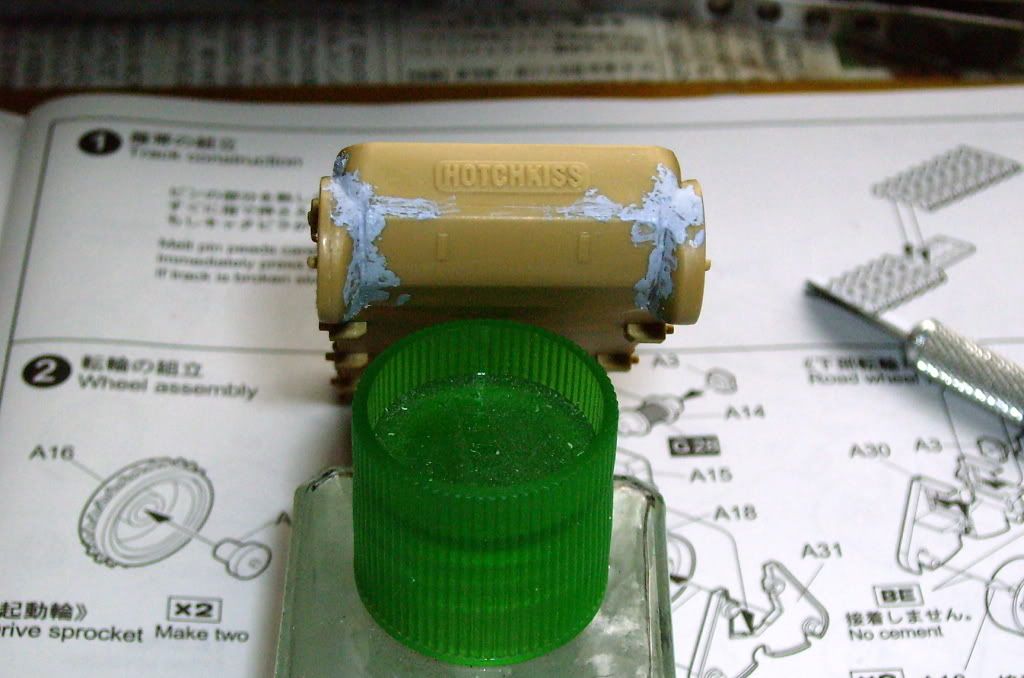 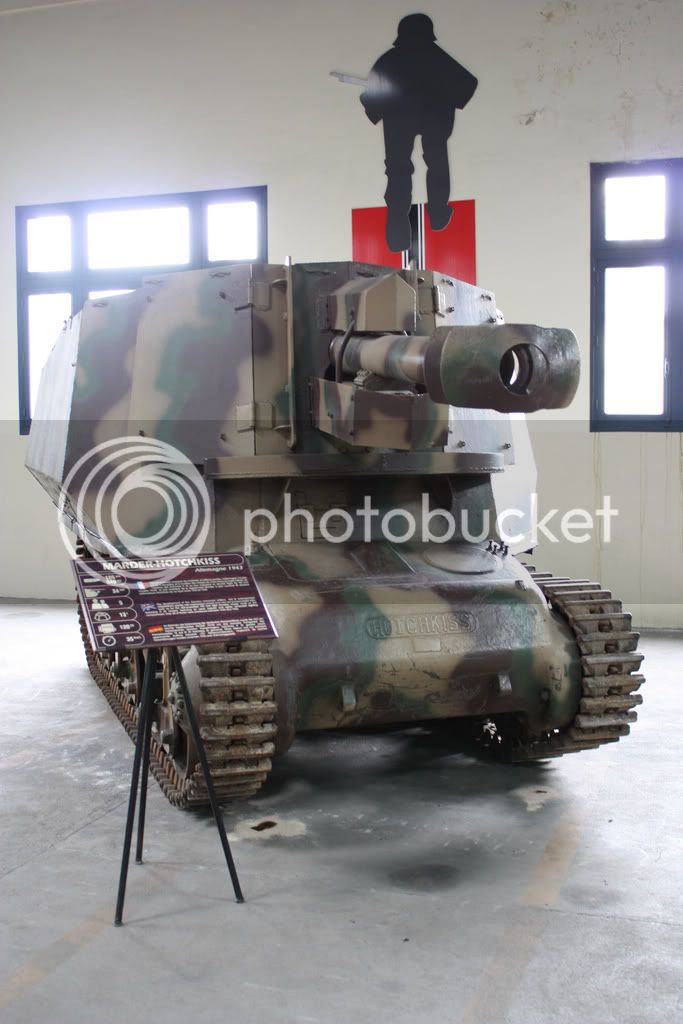 I dont have the patience to fix it, I just started filling in around the area in an attempt to make it look a bit better. The drive sprocket is mostly OK though the raised area in the centre of the hub looks a little too large and possibly the wrong shape. The area around the ten bolts in the centre doesnt seem quite right and I can find no evidence (so far) of the holes around the rim near the teeth. 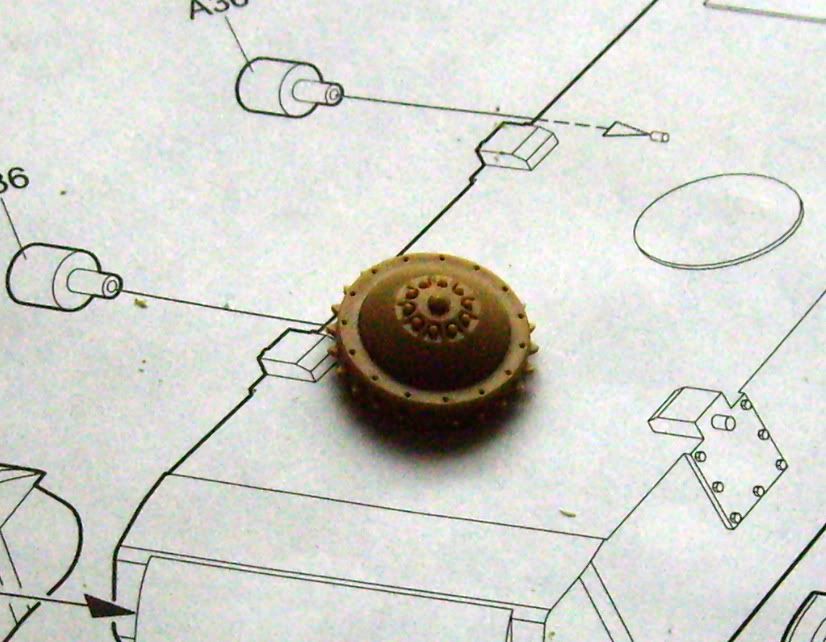 The insides of the two halfs of the suspension units have a few ejection marks but they are mostly invisible once the units are together. 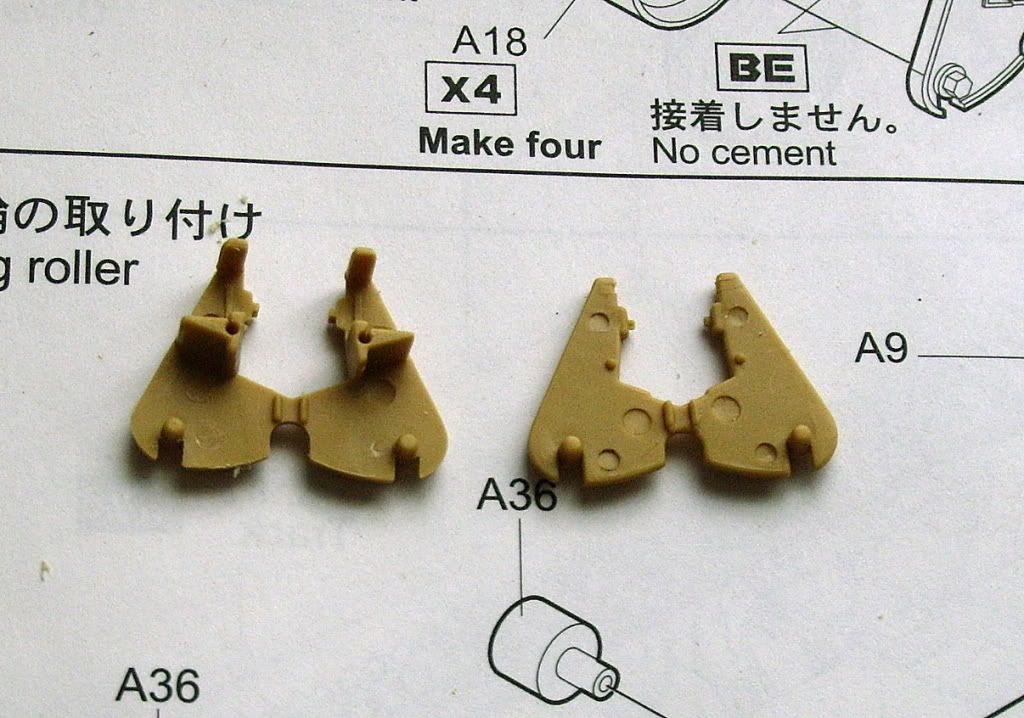 I made up one unit to see how it went as I suspected it might be fiddly...and I was right. The spring at the top, and its two end plates, pretty much have nowhere to sit! Theyre quite sloppy. Also the wheels are designed to rotate so at the bottom nothing is glued together! This leaves it fairly flimsy. I left the wheels to rotate for painting, but I think Ill have to glue them after that. The large ] shaped piece in the centre (red arrow) is also lacking in a strong seating and putting them together was a bit wobbly. 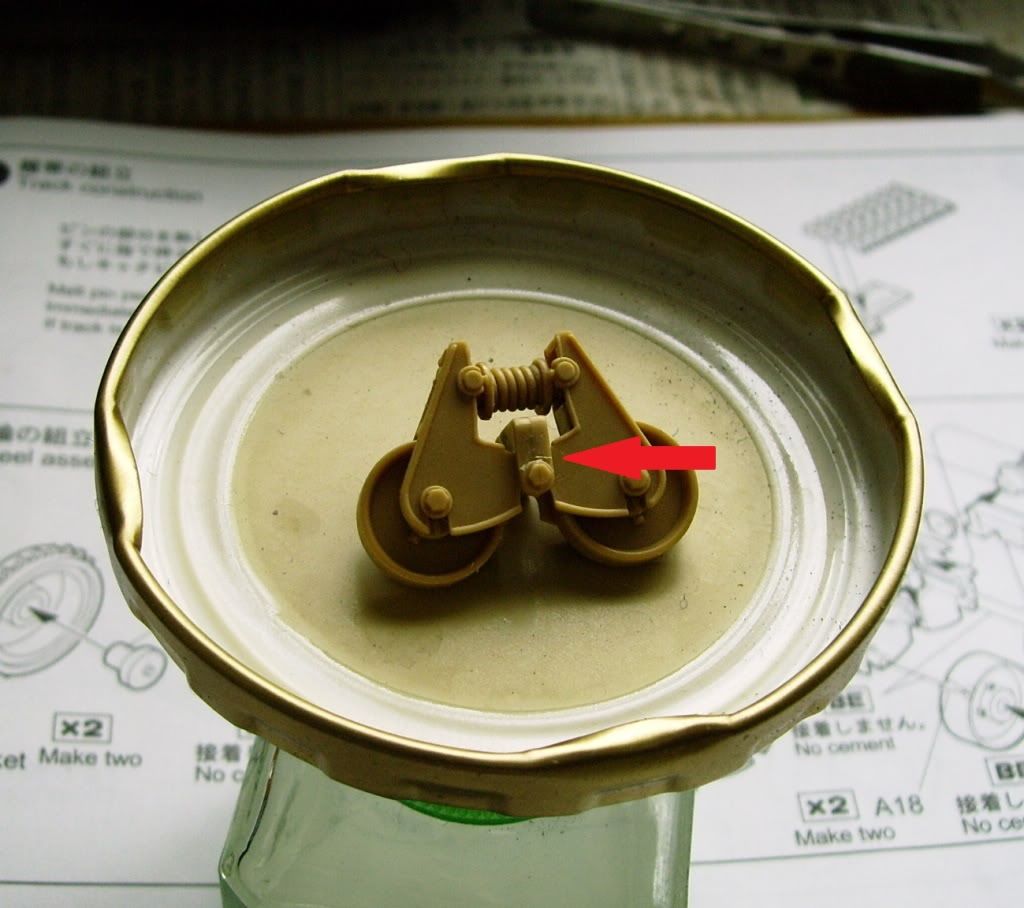 Unfortunately in this pic my piece of c--p camera decided to focus on the background so its not so clear, but there are mounting plates for the bogies (blue arrows) and return rollers which my ref pictures clearly dont show. Thers a C-shaped gap at the front of the mount for the drive sprocket, which Im guessing shouldnt be there so its been since filled, and a small pip in the centre which causes the drive sprocket to bow in at the bottom. Its since been removed too. 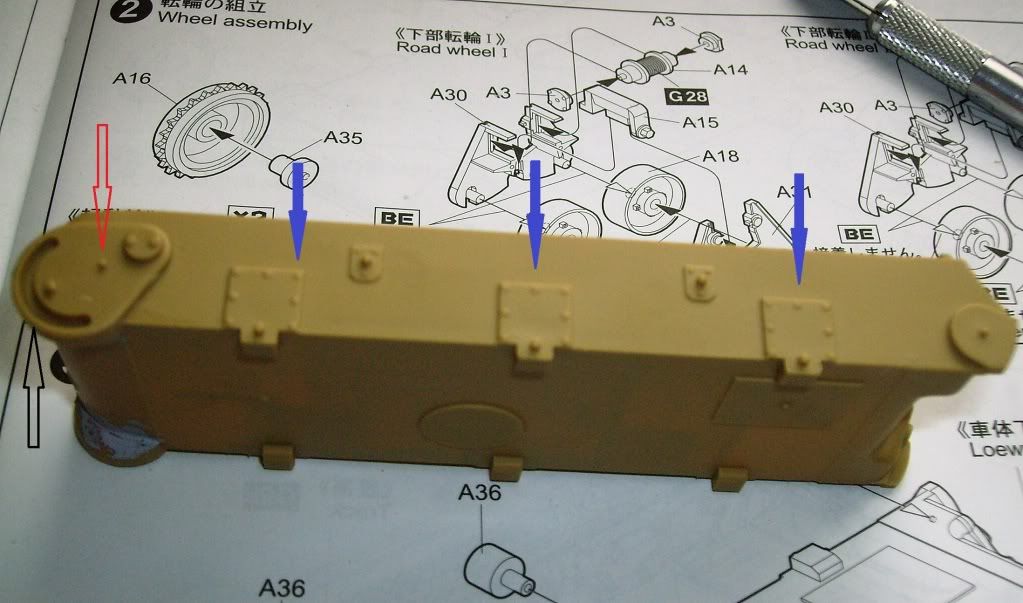 The bogie mounting plates also (to my eyes) cause the units to sit too far off the hull sides, but Im going to look for further refs before I remove them. So progress hasnt been great, but at least Ive started. I dont want to spend too much time correcting every nut and bolt, but I wonder if the Trumpeter version is better, or if its just a re-boxing of this Pitroad effort.

Well I checked some walkarounds at SVSM Gallery, theyre of original gun tanks but its hull/drive train details Im looking at at pres so thats OK. I can post pix later but I found 1) the holes around the sprocket teeth should be almost flush countersunk screws, the kits holes are way too deep, and the raised area in the centre should be a hexagonal bolt, with a convex top and a circular centre, 2) there are mounting plates on the hull behind the bogies of the guntanks (but not on the other pix I have of the German modified vehicle), but they look smaller than the models and arent very easy to see, 3) there should be largish hexagonal bolts on the inside of the final drive housing (?) which arent present on the model, 4) the area where the rear idler mount attaches to the hull should be serrated and isnt on the model.
Of course we all know its possible there were variations in production runs and in-field modifications to take into account, and examples preserved in museums cant always be relied on as typical, but Ill have o carry on with what info I have. But as I said also, Im not aiming for 200% accuracy, just want to actually finish a model for a change!!!

Hi Roy
I think I'm going through a similar situation with the Emhar kit on my bench: there's a growing list of inaccuracies, so what do you fix and what do you leave? Anyway your H39 looks good so far, following with interest!

Thanks to work Ive not been able to do ANY work on this for a while, but I didnt realise itd been 6 months! Swear words! However, my job is now history (long story). Im taking a one month sabbatical, to rest and recover after whats been a VERY tiring and stressful 6 months, before I start seriously looking for a new job. So hopefully, maybe within a week or so, Ill have enough energy back to re-start this project. Why, oh why cant I just win Lotto?

Work/life is the curse of the modeller.