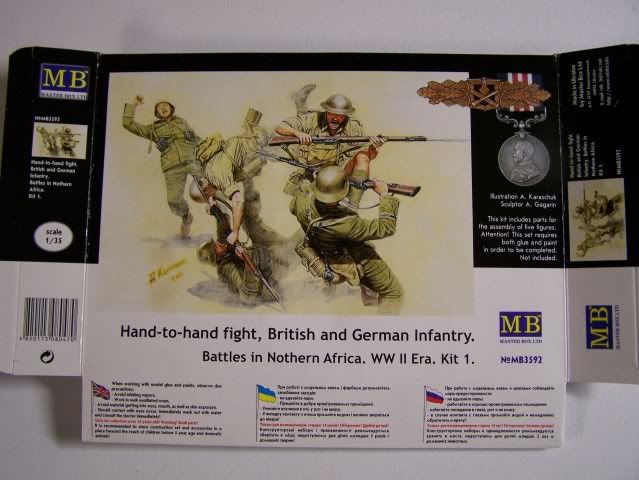 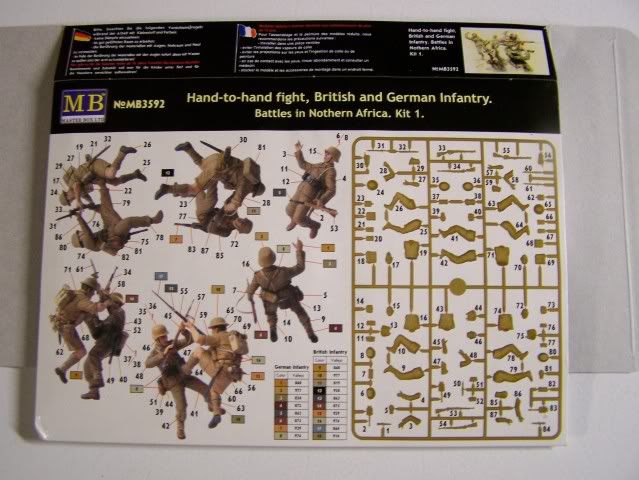 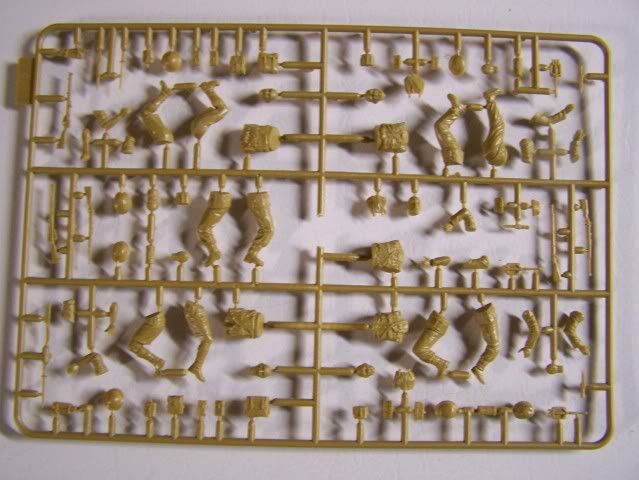 Contains 1 sprue with 86 pieces that have no flash.

It has three German Infantry figures, one is shot while the other two are locked in hand to hand combat with two British Infantry soldiers. If you have ever seen any of the old training movies, These figures are in “typical” hand to hand combat poses that they trained for. (Note that this is marked as kit #1 and all the other hand to hand combat sets have two more with soldiers from either group). I can't wait to see what Master Box might have in store for us.

Conclusion: It appears that Master Box has once again released “a diorama in a box” that by the number will be added to like the Soviet/German and USMC/Japanese Marine sets, which will have many possibilities for an endless list of future diorama's.
The uniforms and equipment are covered in numerous books, so information on these should not be too hard to find.

Overall this should build into an outstanding replica and is highly recommended for anyone who enjoys figures. I would like to thank Alexander Surzhenko of Master Box Models for the review kit.

It's great to see a company with the imagination to tackle such subjects. Allied figures are few and far between and this is a fantastic leap to actually get some in close combat. MB have never ceased to amaze me wit their poses and I look forward to adding another set to the collection, these should go well with their other recent 8th Army set
Cheers
Al

Shawn any chance you can post some pictures of the figures built? or are you going to do that in time? I think I'll pick these up for sure!

Jaymes,
I hope to get a chance to work on them soon, but who knows with my schedule this Summer?
I can't wait to see what the other two kits in the group are going to look like. Yee Ha.
Shawn

Awesome Shawn I am looking forward to seeing the other figures

I also have the British Infantry set, (I did a review earlier on them), but I'm waiting for the German set that will go along with it (The British Vickers, German Mortar and Italian MG team) are all to be released later, Check out the Master Box site.

The in progress section has some really nice stuff. Look at it, let Alexander know what your think (guest book) if you see something wrong or missing tell him and he has been great about trying to fix it before it goes to production.
Talk about companies listening to the modeler. Master Box is great for that.

Yes and Alexander and his staff are some of the nicest people on the planet , they listen , they react and cater with some superb sets and really deserve every bit of support we can give them .

I couldn't agree more with you Jenny.
What other company puts the test shot of the product they intend to release up, so modelers can take a look at it and tell them if something is wrong or out of place, so they can fix it before it goes to production?