The Fiat Topolino from Model Victoria is now available as set number
4020 FIAT MOD. 500 A "TOPOLINO" which can be built as either a Civilian or Military vehicle , it now comes with the civilian & Italian Military driver figures .

4076 ITALIAN OFFICER AND PRIVATE NORTH AFRICA were previously released with the excellent North African Topolino variant & are now available seperately , may I say that having built & painted these two figures in my "In search of the LRDG" diorama that they are beautiful sculpts . 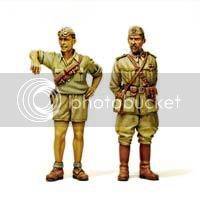 4077 CIVIL IN ARMS seen in the Topolino above is also released seperately , hard to tell what the weapon carried is but he certainly has character . 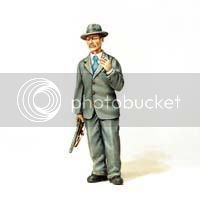 I really like this assortment of vehicles and figures. Very original stuff, very well done.

The civilian can be Lucky Luciano, he helped US forces in the capturei of Sicily.

During World War II, the U.S. government reportedly struck a secret deal with the imprisoned Luciano. United States Army Military Intelligence knew that Luciano maintained good connections in the Sicilian and Italian Mafia, which had been severely persecuted by Benito Mussolini. Luciano considered himself to be a loyal American who was devoted to Sicily, the Mafia, and the United States alike. His help was sought in providing Mafia assistance to counter possible Axis infiltration on U.S. waterfronts, during Operation Avalanche, and his connections in Italy and Sicily were tapped to furnish intelligence and ensure an easy passage for U.S. forces involved in the Italian Campaign. Albert Anastasia, who controlled the docks, promised that no dockworker strikes would arise. Luciano supposedly dropped a yellow handkerchief from a plane flying over Sicily with his crest to signal friendly faces were approaching; this allowed for the Sicilian Mafia to arise from underground and participate in the liberation of Sicily. Both during and after the war, the U.S. military and intelligence agencies reputedly also used Luciano's Mafia connections to root out communist influence in resistance groups and local governments. In return for his cooperation, Luciano was allegedly permitted to run his crime empire unhindered from his jail cell. Although still a part of Sicilian folklore, it is now believed by the majority of mafia historians that the story of the yellow handkerchief is false.

In 1946, as a reward for his wartime cooperation, Luciano was paroled on the condition that he depart the United States and return to Sicily. He accepted the deal, although he had maintained during his trial that he was a native of New York City and was therefore not subject to deportation. He was deeply hurt about having to leave the United States, a country he had considered his own ever since his arrival at age ten. During his exile, Luciano used to meet US military men during train trips throughout Italy, and he enjoyed being recognized by his countrymen, several times taking photos and even signing autographs for them.

Re: New from Model Victoria