I've been pretty interested over the years in the development of tank technology over time. From the British Mk 1 which in 1915 had 12mm armour, crawled along at 7km/hr and could be damaged by running over a rock as it had no real suspension - to the American M1 tank in service today. It's armour is equivalent to about 1 meter of steel plate, and at 70 tons is able to cruise at about 70 km/hr!

So I was glad to see Accurate Armour bring out a 1:35 model of what is considered to be the first ever tank. "Little Willie" was produced in 1915 and saw trials soon after but never went into production. I'm glad to say it survives today at the tank museum at Bovington.

This model would provide a starting point or 'bookend' if you like to any collection of notable tanks produced over the years. It is resin and PE, available from Accurate Armour. 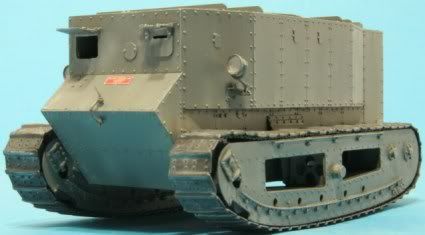 What is the price for this one?