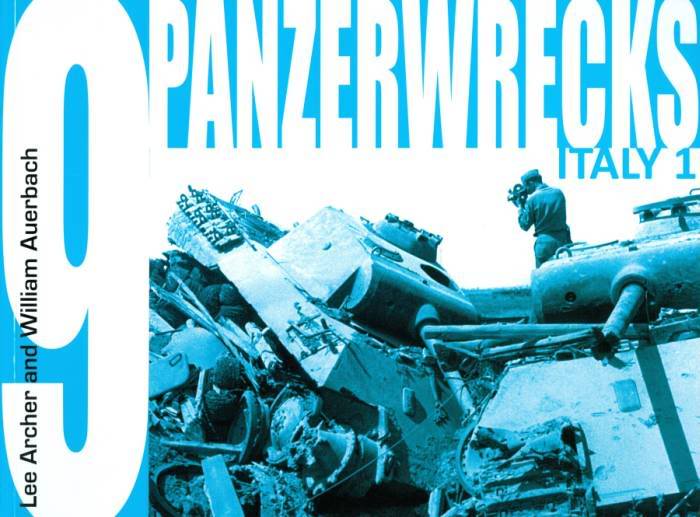 Panzer Wrecks have begun dedicating issues to a particular theater. This is their third effort and cover Italy as the Area of Operations. The number one next to the subtitle of Italy indicates that future volumes on this theater may be in the works. Bill Auerbach and Lee Archer have done a superb job of finding interesting photos illustrating German Panzers in a natural late war state. The tenth issue is announced for Spring of 2010 on the back cover.

The style begun with Panzer Wrecks 1 has been maintained. It is in a landscape format with perfect binding and high quality gloss soft covers. The book measures 8.125 inches tall by 11 inches wide and has 96 pages within. A great thing about the binding is the added creases to allow the covers to open further without stressing the binding.

The front inner cover has a table of contents, acknowledgments, and a brief introduction by Mr. Auerbach. Much of the content is grouped into features and the outside edges of the pages repeat the feature title in a vertical format. This is a quick and easy to use design for realizing the photo’s location. The 96 pages are on a very good quality semi-matte paper which can reproduce details in a photo quite well. Photos are large, with many one to a page, and some consist of a series (whether by photographers or from a film) and help illustrate vehicles from different views and/or different lighting conditions.

There are 142 photos excluding the outer cover photos which are repeated within. There is a map and a few inset sketches illustrating unit insignia details. I learned long ago to ignore the conservative photo count (137 in this case) shown on the rear page blurb! The front cover photo appears on page 92. On the rear page, it is the same photo which appears on page 75. A cropped photograph on the front inner cover appears complete on page 80.

The features mentioned in the table of contents include:

The book begins with twelve pages displaying photos of a Panther, several Panzer IV tanks, Sd.Kfz. 7 halftrack, and a StuG III. The destruction of the Panzer IV tanks is amazing to see and the remnants of a late build Sd.Kfz. 7 is intriguing.

The first feature is spread over seven pages and contains seven photos not including one inset showing a detail in close up. An illustration of a unit badge appears as a small inset to another photo. Several Panzer IV and halftracks are shown in this chapter.

The next seven pages have nine photos which show more Panzer IV tanks, the bottom details of turned over Sd.Kfz. 251 halftracks, a Sd.Kfz. 261, and an AB41.

The next feature follows with nine pages offering two dozen photos of the Pz.Kpfw.III (F1) flame throwing tank. Interior details are covered and a nice close-up of the fire extinguisher is shown. Four full page photos show the destruction of a tank supposedly hit with a PIAT.

Sixteen pages with twenty four photos illustrate the final resting place of several Tiger. One photo got my attention as the tiger is sinking vertically like a ship in the ocean,

The last feature has six pages, including the inner rear cover, with 10 photographs of different destroyed Panthers found at Anzio. Many display possibilities are shown here.

My sincerest thanks go to William Auerbach for providing this advanced copy for this review. Buy directly from Panzerwrecks by visiting Panzer Wrecks

thanks for taking the time and for sharing with us saúl!