This Griffon Model set is supplementary to Griffon Model WWII German King Tiger update set , and supplies the ammunition racks for the rear of the turret for the Porsche Turreted King tiger kits of either Tamiya or Dragon kits.

The set contains two etch frets and two pieces of.3mm brass wire . There is no ammunition supplied in the kit , the instructions allude to a upcoming release of an 8.8cm KwK43 Ammo kit 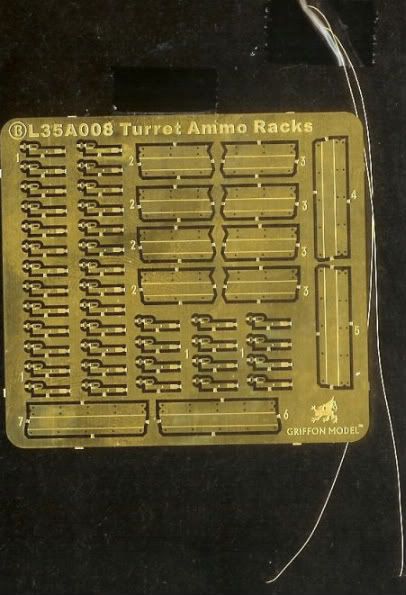 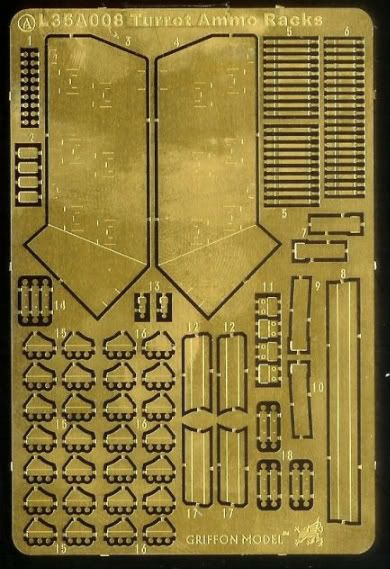 The set builds upon a left and right hand wall , with eight rounds on each side , four on the bottom racks & two on each of the next two , each shelf has three supports , the first two supports have straps that secure the rounds in place where the third one at the rear just rests the back of the shell .

The construction of the first and second support is identical except the size of the securing straps as they are longer on the middle support as the taper of the cartridge case increases , wire is included for the pivot between strap & support . Each of the upper supports attaches to the side walls where the bottom shelf attaches to the overhang floor of the turret .

The set , like all ammunition stowage sets , is reasonably simple but repititious , shaping the 32 attachment straps for the ammunition will take patience but the reward will be in the highly detailed ammunition storage compartment . Combined with the ammunition boxes of the Griffon German King Tiger update set there can be the makings of a nice reloading scene .

My thanks to Griffon Model for the review sample .