This update set is for any of the Tamiya or Dragon King Tiger kits be they Porsche or Henchel turret variants. 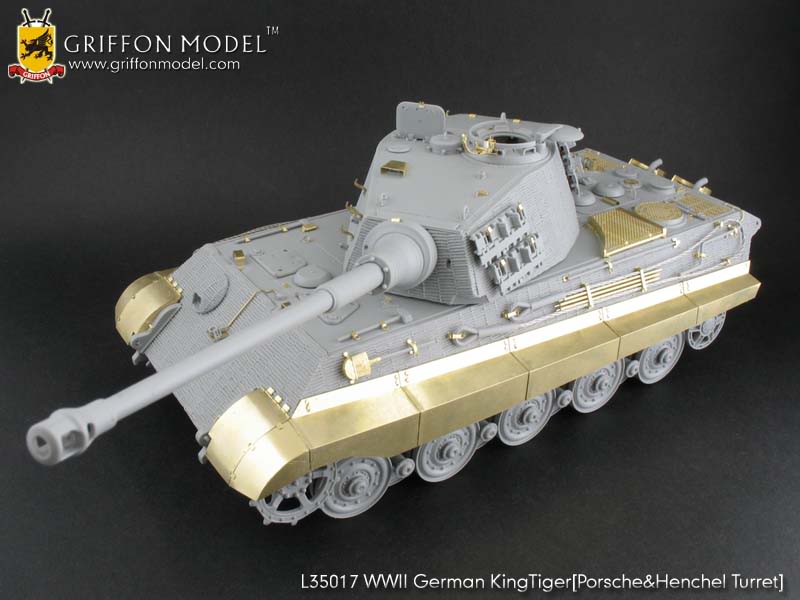 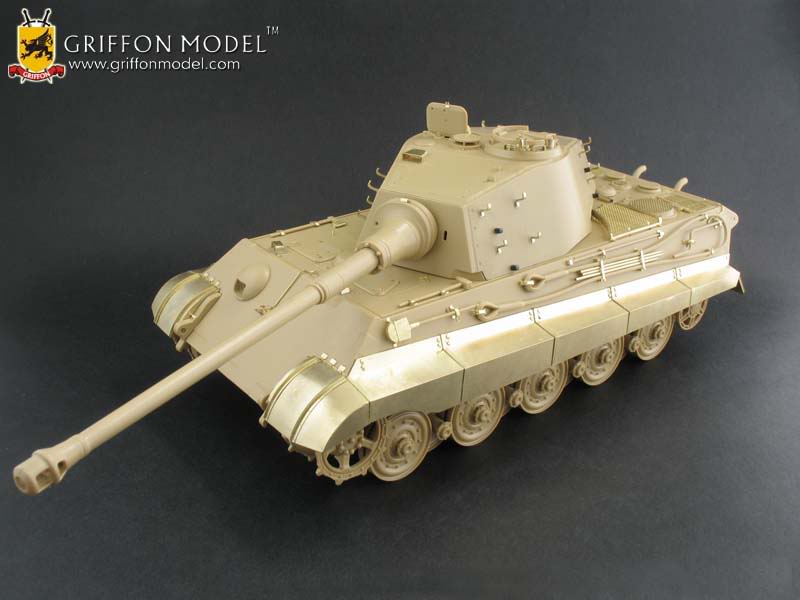 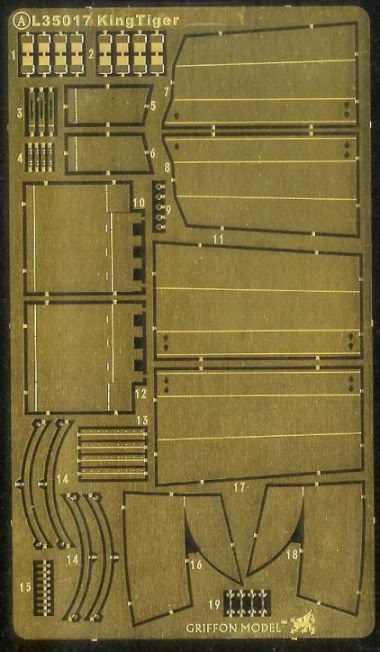 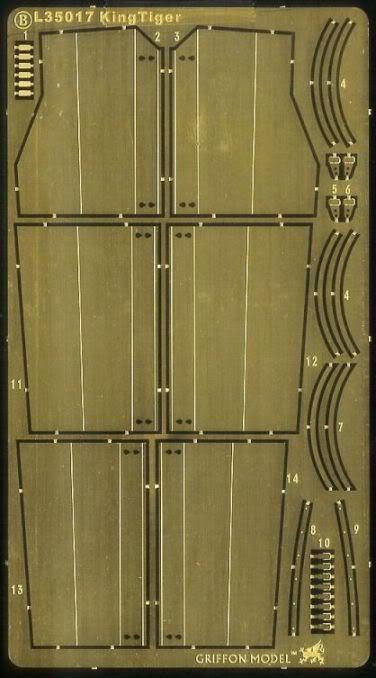 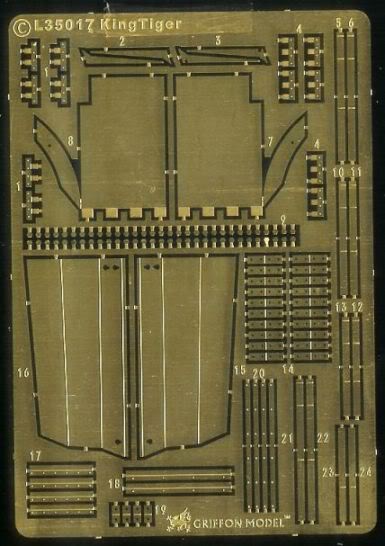 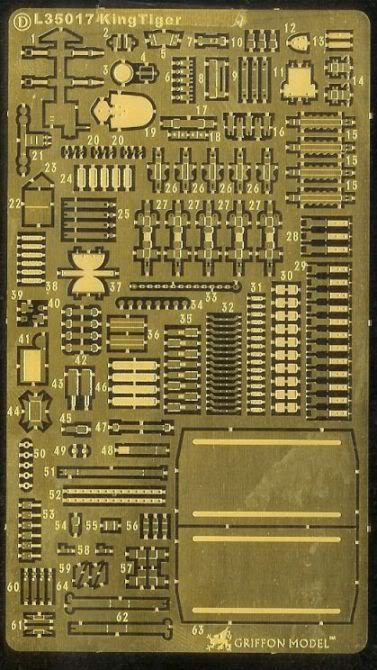 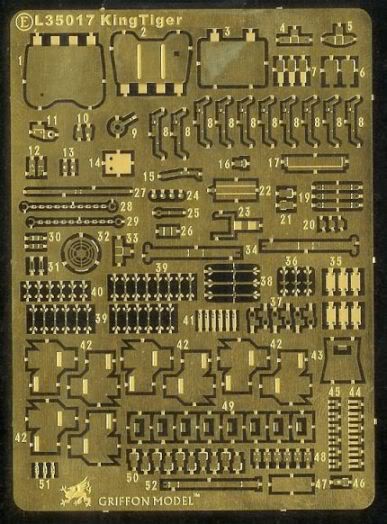 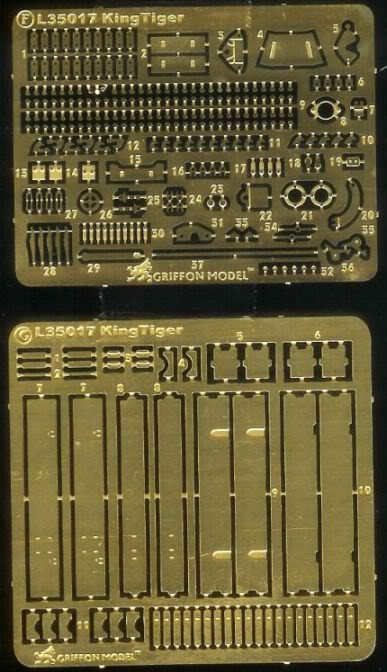 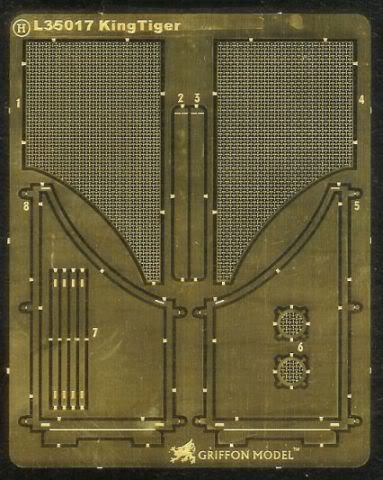 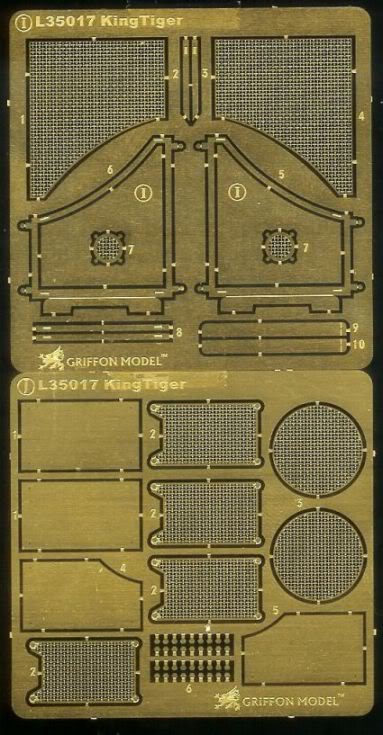 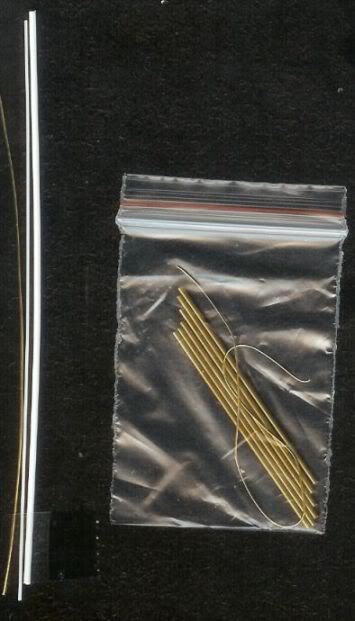 The Griffon update set contains all the tool fittings for shovel, sledge hammer , axe , crowbar , starter crank , bolt cutters , jack block , jack & fire extinguishers . For anyone who has not used Griffon sets before , the tool clamps they use are designed from two pieces of etch , not three , so they have taken the urge away to make them "working" , thus meaning they are not as fiddly , they do profile the clamp IMHO more realistically than other working clamps .

The detailing gets to buisness on the rear of the hull , tiny cast numbers for the exhaust shroud , as well as lift lugs & bolted gaskets for the exhaust pipe. New rear guard replace the plastic ones , these hinge upward like the real ones & have all the underside bracing , the outer sections also fold upwards as the real deal also , so if a vehicle being transported on the rail cars with the schürzen removed the rear fenders can be folded also , it also allows very realistic battle damage to a vulnerable part of the vehicle . C Clamp fittings , rear lights & reflector are also included as are the exhaust shrouds for early Porsche variants.

There is a choice of front fender types , being the standard type or late type with external bracing , both are hinged like the original . fittings for the bosch headlight are also included .

The schürzen plates are all inclusive , there is an alternate shorter rear schürzen part for the Tamiya kit , all schürzen mounting brackets & bolt heads are included also . Obviously with the length of fold required , a Hold & Fold style tool will give the best results . All brackets for the tow cables are included but not the cable itself , as well as the brackets for the track changing cable & also the 6 piece gun barrel cleaning rods in brass rods are included .

New periscope guards for both driver & radio operators periscopes are included as well as etch lifting hooks for the access panel which incorporates both the drivers & radio operators hatches , the external locks for both hatches are refined with small fittings as well.

Onto the engine deck & the engine access hatch has a new "handle" this is a inverted U shape fitting which fitted the crowbar for the leverage to open the hatch ! All four of the engine access panels lifting hooks are also replaced as well as the smaller lift hooks around each fan shroud . There are alternate fuel cell breathers depending on the time of production , so it may need some research if modelling a specific vehicle . Then there is a full compliment of engine air intake covers , as well as the delicately etched covers there is also Porsche & Henchel air intake leaf shrouds , these were designed so the front air intake could deflect enough leaves to get the necessary air needed for the engine , the Porsche design allowed for the larger shroud & the Henchel design had to be cut back to suit the turret . Another option is for the protective armoured covers which were a late war fitting over both rear and front intakes , all options are included .

Onto the Turret exterior , the Loaders periscope is replaced so is the commanders sighting post , the hinge for the shell ejector hatch on the turret roof gets new hinges plus a stop which limits the angle it opens to and also makes it possible to be closed from the interior . Other smaller fittings are replaced , unique to either Porsche & Henchel variants & also to Tamiya & Dragon kits on the turret roof & Mantlet . A full set of spare track brackets are also included for the turret side of a Henchel turreted King tiger too.

The cupola has the blade sight for external sighting & hair sight for periscope sighting plus the bump stop for the hatch . The full AA MG mount is replaced with a highly detailed multi part fitting which will add a lot of detail to this area of the kit . The internal hatch opening mechanism is also detailed . For the Tamiya kit the seven periscopes are included in etch & handles are also provided to detail the Dragon periscopes .

The loaders hatch has the full locking mechanism which with careful assemby will allow a impressively detailed improvement from the moulded on detail , the external padlock fittings to the loaders hatch are also included . The Turret rear escape hatch also has some significant detail improvement to the pistol port in the centre of the hatch including the chain , the hinged centre slide is also included & can be made operable , this is handy as it was utilised for loading munitions so can be "In use" for rearming dioramas . It should be noted that the type of hatch was vastly different for the Porsche & Henchel variants & upgrades for both types are included.

The interior of the Turret has some greatadditions as well , the locking mechanism for the spent shell hatch is included as well as the cover for the gas extraction fan . The locking mechanism for the breech , attached to the turret roof is also included , as is the hydraulic compression for the loaders hatch . The only area of the turret interior which really is not covered is the ammunition stowage in the turret rear . The omission of these is obvious for a number of reasons , Griffon do these as seperate sets for Henchel & Porsche variants , the two stowage configurations are vastly different & including both would again add much to the cost of the set. Of course most models of king tigers may have the large rear hatch closed so the inclusion of such would be a waste . A really good example of why multiple update kits rather than one all purpose kit should be used . Well done Griffon . 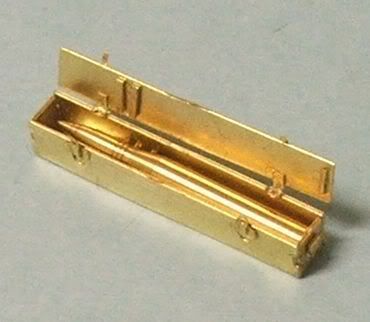 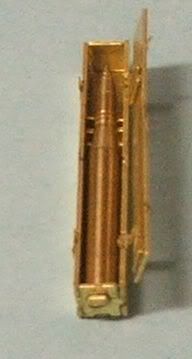 The Brass round is not included but to give an idea of dimensions which seem to be great , the detail of these boxes really is fabulous .

The Griffon photo etched update for the King Tiger is as comprehensive as you could wish , the update is an all round winner as it can be fitted to all the 1/35th King tigers on the market without any worries of being purchased for the wrong kit . The level of detail of the etch is superb . The forethought to include variations of details such as front guards , fuel breathers & armoured covers for example, will please any modeller who wants to model any King tiger of any production period .

Including interior detail as well as two superb ammunition boxes , this shows the level of detailed research that Griffon has added in this update . Given the complexity of parts , most modellers with any PE experience will have no trouble with any sub assemblies , in fact the tool clamps are a joy to assemble in comparison to some competitiors items .

My thanks go to Griffon Model for providing the review sample .

this is indeed a very comprehensive set! wow!

thanks for this detailed review jenny! it surely is of good help for anybody who wants to lift her/his kingtiger to another level!

Y'all are going to turn me into an armor nut yet...

Good idea to have one set for all King Tigers.

Every king Tiger should have one!