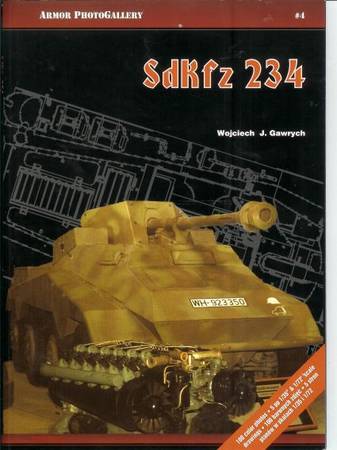 One could probably think after Jennys deservingly glowing praise that this book would be equally as good . Unfortunately this is not the case , not so much that it is the publishers fault but more in the quality of the existing vehicles available . Unfortunately out of the four models of 234 made , there are only two types now in existance .

The 234/1 with 20mm turret & the 234/2 Puma are alas no more , I am not sure what happened to the last /1 which was last seen at the School of Tank Technology , but the last /2 Puma the famous 1111 was disected to thoroughly study the mechanics of the dual steerage , this I have found in another publication .

The last known 234/3 is at Bovington Tank Museum , painted shock horror in Panzer grey ! You would honestly think museum curators would get it right ! The condition is poor , no fittings are left on the guards at all . The interior is stripped of a lot of its fittings .

The SdKfz 234/4 shown is again from the Bovington museum , again nothing much is left on the fenders , slightly better condition than the /3 , again interior is mostly stripped ,the gun has some nice pictures devoted to it . The Tatra engine has been removed with a walkaround of it which has some use . The only other SdKfz 234/4 in existance is the Patton Museum at Fort Knox example & is in a worse condition in storage & is not even shown in this book .

The WWII pictures are only typical captured equipment profiles .

The one bonus is that the Pak 40 walkaround also in the Marder book of Jennys is included . This is of a \"mint\" conditioned gun & is very good .

This issue is in dual Polish / English language examples .

This book is very dissapointing in comparison to the later Marder II book of Jennys , I have two other 234 books which are lots better value for money , I will review these over the next couple of days for comparison . Most of the poor quality of this book is down to the poor quality of the museum examples , there are only so many pictures you can take of the suspension ! I would really liked to have seen some more WWII pictures of the four variants .

Save your money on some better reference books :wink:

I picked this book up in Nashville a few weeks back and totally fell in love with the 234 series, the book is one of only references out there on the Puma series.
Mrosko

You should get this book 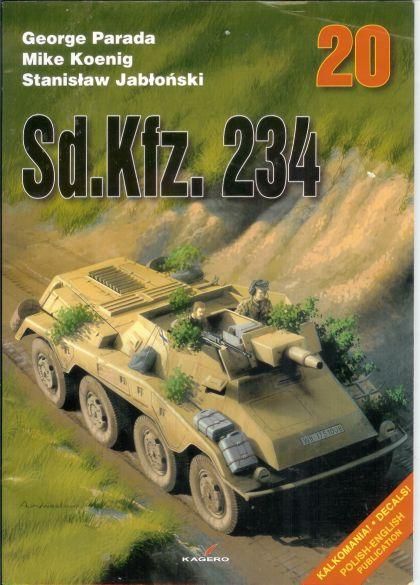 It is heaps better & comes with free decals .

We also have this one which is cool too 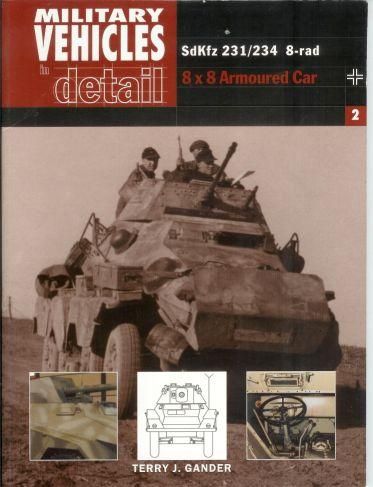 it also has details on the earlier variants .

We should still have a more than four wheel build .

I habe been trying to find it here in the states, no luck yet.
Mrosko

I just checked , my favourite bookstore , Hylands Bookstore in Melbourne has the photosniper book in stock but not the other at present .
http://www.hylandsbookshop.com.au/
They have great service , the price is $36 Australian which is about $2.50 US I reckon